Welcome to Part 14 of the Baba Is You walkthrough – Mountaintop. There are a total of nine levels in this area, so let’s get started…

Get underneath SKULL IS DEFEAT and push it up so that there is one empty tile between SKULL and the cliff.

Now push LONELY BABA IS YOU as right as it will go. Push LONELY down twice, get underneath it and push it up to the top. Then push it to the right to make LONELY SKULL IS DEFEAT.

Now you can head out of this enclosure via the gap with the tree in it. Head through the Skulls as only a lonely Skull is Defeat and run into the Flag.

Note that you are Love and if you stand on the cobblestone wall around your starting area and you’re not on top of a Bird, you won’t be able to continue. So what we need to do first is push the two birds together and use them to push them left so that one is on the cobblestone and the other is on the other side of this enclosure.

Now if you disengage BIRD IS PUSH, you can use them as a makeshift bridge of sorts. We’re going to want to bring over the text tiles, but one at a time so as to keep them Birds from not being pushable. Once you have all three texts outside of the enclosure, remake BIRD IS PUSH.

We then want to push the Bird that it outside of the enclosure down, to the left once, back up and into then ice tile that is horizontally in line with the FLAG text tile. The noble Bird will be a noble sacrifice for the sake of our victory.

Make up BIRD PUSH IS (no, I didn’t get that order wrong) horizontally in line with the FLAG text and push them left so that BIRD replaces FLAG in order to make BIRD IS WIN.

Walk into the Bird that is still standing on the cobblestone and congratulations!

Push the Rock so that it’s two tiles up from the single tile of Water. Disengage ROCK IS PUSH and make KEY IS PUSH, then push the Key on top of the Rock.

Push LONELY onto the Skull, followed by KEY IS PUSH. Push all four texts us as far as they’ll go so that LONELY KEY IS PUSH and it looks like the picture below…

Head down and stand on the Key and Rock, make your way up and push LONELY to the left. Now KEY IS PUSH, so head down to it and push it down into the puddle of Water.

Make ROCK IS OPEN and push the Box up into the Rock, making the winning Flag.

Controlling the BABA text, create BABA IS MOVE. Disengage once Baba is one tile up and one tile left of IS so that he finishes just above IS. Make BABA IS UP so that Baba faces upwards and then remake BABA IS MOVE.

Wait until Baba goes up and back down, bring IS down with him and disengage when IS is one row below YOU. The IS text will swap up once, so then move to it and push it right to make BABA IS YOU. Go right once more so that every text tile in the sequence has something underneath it, meaning that you will now only be controlling Baba.

Move one of the IS texts from the left below BABA and bring the WIN text down as well in order to form BABA IS WIN.

Thank you so much to @Kaynato#0001 (Discord) for their help with this one!

First, we want to push SHUT over to the right so that it is one tile left of the rightmost solitary Wall block. Then one tile above and left of that, place BABA and with a gap below it, put YOU. Then, put yourself as IS in the middle. It should look like this…

Now you’re controlling Baba as well. We want make Baba get SUN out of its enclosure and make SUN IS SHUT. With every step to the left, the IS will come out and break the sequence, so just step back in. It’s a little bit repetitive, but it’ll get you there in the end.

Once you’ve make SUN IS SHUT, have Baba walk into the Sun, sacrificing itself in the process. Still as the IS, go into the area we’ve just opened up and complete TEXT IS WIN. And as you are Text, you win!

In order to make some room for yourself, reform ROCK IS PUSH so that it is vertical with a one tile gap from the right wall of the tiles.

Use the rocks to create a makeshift bridge, with the left side having two Rocks and the right having just one. Disengage ROCK IS PUSH to be able to cross over them (make sure that you push one of the texts to the left and not up against the edge).

Push the Door and the Key back over to the top platforms. Use the text tiles to push the Key as far to the left as possible, but make sure that you don’t push the Door against the edge – you’re going to need to push the door into the Key which will create the Flag.

Huge thanks to Paul Dean for finding this solution!

First you need to make the Bird move downward. Have Baba wait one tile above where the Bird will come past, then when the Bird is on the tile below Baba, push it down. Now the Bird should move down into the area where the ON text is.

Next, do the same thing, but make the Bird move right, across the tiles above LONELY and FLAG. When the Bird comes back, wait until it overlaps Baba, then make Baba move with the Bird, so that you can safely cross the empty space over to where FLAG IS FLAG is.

Put IS FLAG into the lower right corner, then use the Bird to travel back over to the other side. Push the Bird downward again, then when it is horizontally level with the TILE text, push it right, so it pushes TEXT on its way over, disengaging LONELY BABA IS TILE. Now Baba can walk freely over the empty space.

Next, arrange all the text according to the screenshot below, making sure to have a space between LONELY BABA and IS FLAG for now.

Now you need to push the Bird up, then right again, so it travels along the row above LONELY. This allows you to push LONELY down, making both LONELY BABA IS FLAG and FLAG ON TILE IS BABA, then be able to use the Bird to carry Baba back over to the left side.

Now you need to get Baba to the Sun. Push the Bird up again when it is in the middle column on the left side, then wait just below the wall below the Sun and push the Bird left. Before the Bird comes back, move Baba off the tiles to the right, turning into a Flag, and the Bird will push the Flag across to the right.

When the Flag reaches the other side it will become Baba again. Repeat these steps with the Bird moving in the same row as the Sun to transport Baba (as a Flag) to the Sun and win.

Push the top Pillar through the top gap on the right wall three Rubble tiles in. Push the Pillar down so that it is one tile above the empty tile below, take one step to the left and proceed up until you’re out of the Rubble.

Go get the other Pillar and bring it up to the left gap on the top wall. Push the Pillar one tile in, disengage PILLAR IS PUSH and stand on the top pillar. Head right twice, all the way down and through the bottom Pillar. Push IS to the left to make FLAG IS WIN and make your way up and out of the bottom edge on the right wall.

Reengage PILLAR IS PUSH and push the other Pillar down twice, to the left so that it’s up against the wall and down through the bottom-left gap. Push the Pillar up into the Cloud and waltz on into that Flag.

Thanks to @Kaynato#0001 (Discord), Derek Henry, and 허민 for finding the solution to this one!

Now go around and push the remaining Rock down, which will disengage ROCK IS PUSH, but simply go below ROCK and push it back up to remake the sequence again. Push the Rock to the far right tile, head up and around ROCK IS PUSH to avoid breaking the sequence, and then down and across the other Rock to form a bridge of three Rocks joining the platforms.

Push ROCK down to be horizontally aligned with the Rocks, but push it right, so it is off the platform. Now bring IS PUSH down to the same row and push them into ROCK, so all three texts are off the right hand side of the platform, in the same way the Rocks are on the middle.

Now you can bring the left Baba over, and make them overlap eachother, so that they aren’t Lonely anymore. This means that you can freely walk over the empty space, and push the Key into the Door. Baba Is You is a grid-based 2D puzzle game developed by Arvi “Hempuli” Teikari as an expansion of his award-winning entry in the 2017 Nordic Game Jam. With an ingenious 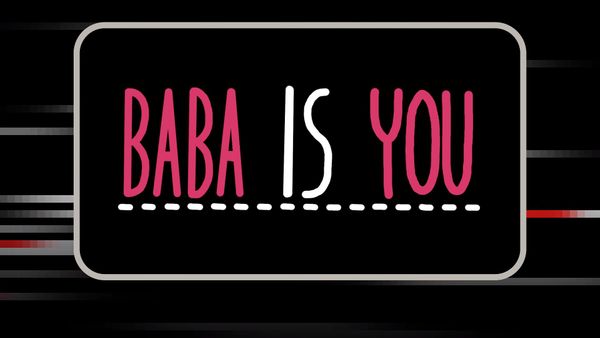 Welcome to Part 14 of the Baba Is You walkthrough – Mountaintop. There are a total of nine levels in this area, so let’s get started… Level 01: