Verlet Swing is a quirky 3D, first-person simulation game that has you using objects around you to swing to the goal. With 100 levels to conquer, this game packs a lot of challenge, however it begs to question as to whether that challenge is worth the reward.

The aim of Verlet Swing is to hook onto various objects and swing to the glowing orb at the end. From the very beginning of each level, you can see a beam of light to show you where the goal is. If you need a better idea of the game, just think of yourself as Spiderman, flinging through each level from a first-person perspective.

There is just something so simple and fun about swinging from one object to another. It’s a sort of simple fun and it makes you feel like a bird soaring through the air… that loses its wings and will crash and splat on the ground if it doesn’t hook onto the next object (this simile may have gone off track a little).

One thing that could have made this game crash and burn would have been technical difficulties, specifically frame rate drops. Luckily, Verlet Swing runs flawlessly and throughout my entire five hour playthrough of the game, I did not notice a single hiccup.

Being so used to gyro aiming on the Switch, Verlet Swing could have GREATLY benefited from it. I looked everywhere in the settings but alas, there is not option for it. Sometimes an object that you’d need to hook on to can be so small, or you are moving so fast, and having to make every slight movement with the right analogue stick just to connect with something can feel frantic and clunky.

Each level is strictly linear, swinging from start to finish. That being said, the way that you get to the end may not be as linear. There is usually more than just a single way to get to the end with more than one option, object or ledge to hook onto at any given time. It may also come down to how you use your momentum with the ability to adjust your projection midair.

Some stages seem particularly awkward to traverse, making them frustrating to traverse. There are some incredibly clever and intricate levels in this game, don’t get me wrong, but when you’re stuck on a bad level with no way to skip to the next one, it makes you want to close the game and never want to touch it again.

Whilst there is technically no plot to the game, the random objects placed throughout each level adds an absolutely bonkers personality. However without context, it feels lacklustre to be swinging around the place without a purpose. Something simple and basic would have worked wonders and done the job.

Verlet Swing has some bright and vibrant colours that makes swinging around each level a delight. However, each object seems like a bunch of low quality polygons thrown together. I also felt that some of the backdrops and ground designs could have used more detail, helping the game to feel less like a tech demo.

Despite this, the game’s seemingly random placement of assorted objects – such as hamburgers, beach balls and Easter Island heads – gives the game a charm that is difficult to place.

Verlet Swing’s soundtrack is not as exciting as its gameplay. To be brutally honest, it’s incredibly bland. It’s not bad, however it seems to be simply thrown together as an afterthought without any variety whatsoever. It also gets very repetitive, so don’t expect much on this front.

However, the sound effects are nice and effective. Despite losing, there’s something oddly satisfying about hearing yourself soar through the air or the sound of crashing into a slice of pizza and hearing that squelch!

Verlet Swing is a great way to quickly kill some time, but its difficulty spikes and awkward controls can keep a player from wanting to come back. Its wacky randomness certainly helps to add some charm and personality to the game but without any sense of a plot and a bland soundtrack to boot, it feels like Verlet Swing wasn’t quite ready to be taken out of the oven. Recently, the first Turok game has made its way to Nintendo Switch. During Limited Run’s E3 conference, they announced that not only will the sequel be making its 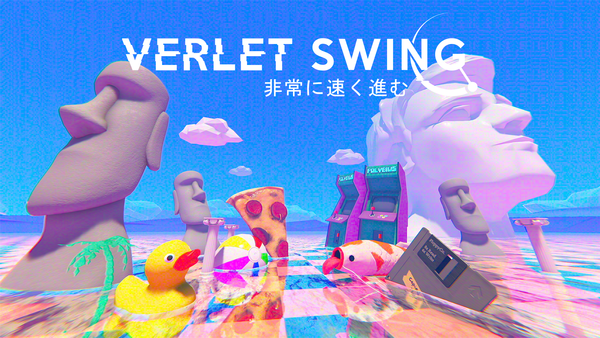 Verlet Swing is a quirky 3D, first-person simulation game that has you using objects around you to swing to the goal. With 100 levels to conquer, this game packs a