Vaporum is a steampunk roguelike dungeon crawler, with the aesthetics of the original two Bioshocks, and gameplay akin to that of ‘Legend of Grimrock’. It is absolutely a ground-breaking step in the right direction for the genre.

Vaporum’s gameplay revolves around two primary aspects: puzzles, and combat; both of which can be used with the game’s ‘pause time’ mechanic, which makes it so each time the player makes a move or turns, time advances one second after it, and is then paused again.

The puzzle aspect has very enjoyable moments, and is similar to ‘The Room’ game series, albeit with less thinking required. Tasks such as obtaining keys, placing bricks onto pressure plates, and moving boxes all feel enjoyable to complete – primarily due to the lack of hand-holding. It’s very reminiscent of older games, where players had to trial and error different items to advance, and create a map of the world by hand. Vaporum actually offers the latter, with players able to disable the mini-map (if that’s your sort of thing). Some puzzles felt impossible to complete without the help of time-stop, which was slightly frustrating for me as I only realised you could pause time towards the end of the first level…

Combat has many different aspects, ranging from equipment, health, gadgets, and energy. The player can equip two different item sets, and the game features both guns and melee weapons. Guns are typically stronger, and add range to the player’s attacks, but are limited by ammo. I found myself preferring to fight without time stopped, which created a cat and mouse chase with enemies as we danced around four tiles. In larger combat scenarios however, it was almost essential to use time stop, as keeping track of multiple enemies and their actions, as well as ensuring they didn’t surround me, was vital for survival.

While I wasn’t particularly a fan of the combat itself, I was able to appreciate its depth and the limitations of the genre itself.

Vaporum follows a washed up amnesiac as he enters a giant mechanical construct and explores its hidden secrets. Without spoiling too much, the plot was interesting and kept me engaged. The voiced protagonist’s narration throughout was both soothing and extremely well done, although sometimes a bit too obvious. Titbits of information can be found throughout the game, such as voice recordings and letters, and add nice depth to the world.

The soundtrack was nicely spaced out, and blended into the backdrop nicely. When entering combat, the music was intense, and the use of different gadgets and sound effects on weapons and items was compelling. It doesn’t break ground for innovative soundtrack, but it doesn’t do a terrible job either.

I play most of my switch games in handheld mode, and unfortunately this game has its issues transferring from PC to the Switch. Firstly, the lower resolution makes it difficult to read words and subtitles, as they are miniscule compared to the rest of the screen. Secondly, the graphics were very pixelated in comparison to other Switch entries. It felt like I was playing on 480p the entire time – especially going up close to objects and surveying them. These issues aren’t game breaking, but they certainly don’t help.

Vaporum is not going to be for everyone. It’s an entry in a genre that, outside of Legend of Grimrock, hasn’t seen much mainstream recognition. That being said, my time with Vaporum was enjoyed. I enjoyed the mechanics of gameplay, I enjoyed learning about the world, and I enjoyed the puzzles and the roguelike elements. I enjoyed it, but I didn’t love it, and I certainly didn’t hate it either. Definitely check out Vaporum if you think you’d like it, but otherwise I’m going to have to recommend waiting for it to go on sale.

Since the announcement of Persona 5’s Joker coming to Super Smash Bros. Ultimate at the 2018 Game Awards, fans have been speculating as to whether the critically acclaimed 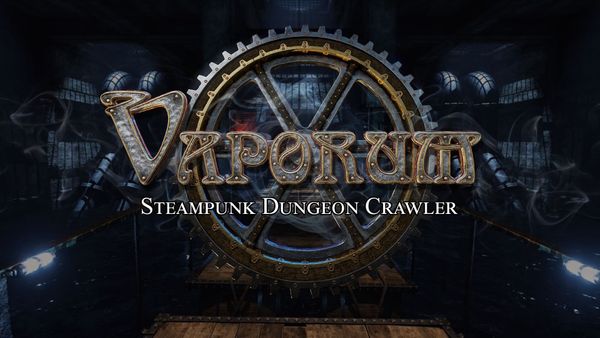 Vaporum is a steampunk roguelike dungeon crawler, with the aesthetics of the original two Bioshocks, and gameplay akin to that of ‘Legend of Grimrock’. It is absolutely a ground-breaking step