It’s pretty clear from the get-go that Unrailed! is an abstract mish-mash of neat ideas hurled at the canvas from the developers given that the main menu isn’t interacted with a cursor or anything so mundane but by walking over the flat signs with your cube-y protagonist. So, when you boot up the tutorial and get knee-deep in building rails, you’re already somewhat accustomed to the zany nature of this mobile-feel indie.

Unrailed! has a fairly simple premise – you gather resources and build tracks so that the moving train can traverse the rough terrain until it reaches the end, fending off highwaymen and trying not to upset your teammates who, undoubtedly, will slew you with plenty of angry emojis. I suppose that’s just a staple of multiplayer gameplay, so there’s that to look forward to when you pick the wrong upgrades or place a track in a wonky, not-so-good place. Nonetheless, it’s a fun concept with a neat art style brought to life by its simplistic shape and vibrant colours and, besides, if you decide to play it with friends and family rather than angry internet strangers ready to unleash a barrage of hate, then you’ll probably have a better time. Still, playing single player isn’t exactly incentivised which is a shame, given the two options of ‘local’ and ‘network.’

Enjoying our Unrailed! Switch review (Quick) so far? Don’t forget to like us on Facebook and follow us on Twitter for more Nintendo Switch content. Also, please consider supporting us on Patreon so that we can continue to do what we love doing.

I mentioned in the introduction that this quirky geometry-based train-building title feels like it belongs on mobile platforms and that’s not to say handheld, stowaway in your knapsack Nintendo devices, but rather your phones and iPads, because it feels one-part Minecraft with its tree-chopping, rock-smashing, rail-building antics, but it also feels heavily Crossy Roads. That’s all fine and dandy but it definitely leaves the impression that you’ve accidentally stumbled on a slightly more complex app store entry rather than a paid-for console title and, like those little nuggets of serotonin you’ll find on your phone, the fun dies off rather quickly and things get a little monotonous. It’s probably one of those games that you’d have more fun watching a group of internet personalities blow out of proportion with silly antics than indulge in yourself.

Click here to read our Quick Review of Breakpoint

A year in early access and finally out, ready to play, Unrailed! is a fun little concept that no doubt will give a little slither of fun for a short breath of time, but at a price tag of $20, you’re better off finding another party game to splash out on.

Thank you for checking out our Unrailed! Switch Review (Quick), thank you to Press Engine for providing the review code and thank you to our $5 and up Patreon Backers for their ongoing support: Courtesy of iam8bit and Skybound Games, we are happy to announce that we are holding a competition to giveaway a digital copy of Ori and the Will of the 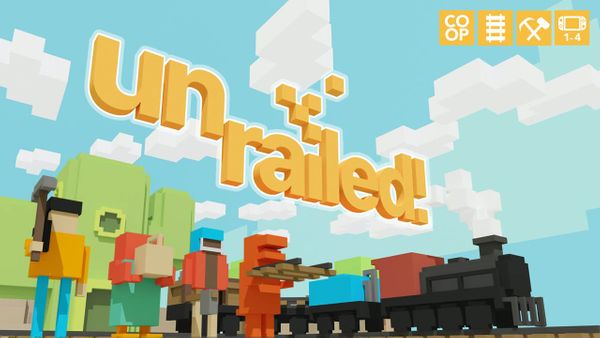 It’s pretty clear from the get-go that Unrailed! is an abstract mish-mash of neat ideas hurled at the canvas from the developers given that the main menu isn’t