Developed by Weappy and published by Nordic Games, This is the Police 2 is a simulation strategy game that has you managing your officers in order to maintain peace in the town of Sharpwood. The new sheriff (Lilly Reed) is struggling at her job and the officers don’t respect her. Enter Warren Nash, a former sheriff himself who has a curious backstory of his own. With Lilly conducting her own investigations towards him, Nash must do whatever he can to stay out of prison whilst using the police force from the inside to his own advantages.

This is the Police 2 is a very story driven game that might not be everyone’s cup of tea. The game is more about engrossing yourself in the plot and character development rather than taking part in the action. However, the gameplay sections become more frequent as the game progresses, so don’t fret if you get a little bored within the first few hours.

The gameplay in This is the Police 2 takes a shift in the sequel by adding in strategy RPG sections. These allow you to use a variety of perks and weapons that a police officer would have at their disposal in order to take down gangs and crime operations. Use your taser gun to stun enemies, break down doors with battering rams and defeat enemies by handcuffing (or killing) them.

The newly added strategy RPG sections, whilst added with good intentions, contain mechanics that are incredibly convoluted and unintuitive. There are way too many perks to choose from, and it is difficult to keep track. Sometimes missions will require you to proceed undetected, and take it from a seasoned veteran in strategy RPGs, it is way too easy to be detected. And once detected (even if you kill them quietly before the end of that turn): mission failed. The game does let you retry the mission as many times as you’d like, but it gets way too frustrating going over the same mission so many times when the units move so slowly.

There are a variety of different puzzles that seem to rotate as you play through the game. Most commonly, you’ll be managing your units through day-to-day callouts and solving cases by pouring over witness and suspect testimonies. These sections require you to send out one to six troops (as long as their total reaches the star points required of the call) in order to apprehend the offender. You can equip weapons and items which allow for more possible scenarios, and you must think logically (such as giving the unit with three points in the Shooting skill a taser because he’s a good shot, or pepper spray to the unit with great stealth because they can sneak up on the offender and incapacitate them). This puzzle also requires a lot of thinking but with a whole lot less reading. It’s entertaining going through each individual scenario, often branching out into different circumstances that requires you to think and adapt.

On top of all of this, you’ll need to make sure that you keep your officers happy so that they remain loyal to you. This may include letting them have a day off, not putting them on multiple days in a row, or solving investigations that will provide the officers with perks when they’re not out patrolling.

These sections can become fun when you get into the groove of things, but they can be overly ambiguous at times. Occasionally, we would experience cheap deaths in situations that we wouldn’t have been able to avoid unless were were able to foresee the correct answer. We even had a skill on an officer maxed out and chose the correct option that corresponded with that skill and the unit still died, and yet other times the officer would only have a single point in the same skill with a very similar problem and they would be successful.

Despite there being an abundance of tutorials, some parts aren’t explained very well, with one part in particular potentially leading to a game over screen early through the game. To avoid this, you’ll need to sell evidence and provide assistance to friends. However, the game completely fails at teaching you how to do this, and you will often go down a frustrating spiral of game over screens. You’ll need to be incredibly meticulous in order to not get a game over screen as the game can often spike in difficulty so quickly that you won’t be able to keep up.

It often feels as though This is the Police 2 tries to do way too much, resulting in nothing being implemented properly and everything just resulting in a massive headache. Everything feels chaotic and it can sometimes come down to sheer bad luck as to why you’d fail a task. Its gameplay is very difficult to master, without giving you the incentive to want to master it.

All in all, if you go into this game blind, you will not know how to play correctly and will likely receive a game over screen. After making a few mistakes, it seems to create a snowball effect (lose/injure a few officers; be short staffed; not be able to see to all calls; receive less beer can tabs to get some more officers; be short staffed; game over). Something that could have helped would have been to be able to go back to previous few days, instead of just throwing a game over screen at you. Whilst the tutorials may seem like a lot to take in, it still doesn’t seem to give you all the information you need in order to see yourself through to the end. That’s why we whipped up a little article on some tips for the game, which you can check out by clicking here…

To make matters worse, menu systems are awkward and unintuitive. Dispatching units and organizing through your officers is chaotic and when you have selected a few officers and want to take out a single unit. You can’t just select them and take them out, you have to get rid of them one-by-one until you get up to the unit that you want to take out. Also, we noticed frequent bugs that caused us to be unable to properly navigate menus, to the point where we had to cut our losses and suspend the game, only to have to restart the in-game day from the beginning. These bugs would often be the up direction on the D-pad not working at all, whilst it would on the analogue stick; and even one time, no direction working at all but down. This must be something that Weappy has to patch immediately, and it may only be on the Nintendo Switch version, but it caused the game to often be unplayable. It is at this point where we have to come clean and admit that we didn’t actually complete This is the Police 2 in its entirety. We reached around the halfway mark (approximately ten hours of a 20 hour game) as the bugs and unfathomable design choices made the game too infuriating to continue playing.

The story is where This is the Police 2 shines, and it truly is a shame that it is coupled with such convoluted gameplay and buggy control schemes. This is the Police 2 is a very story driven game, often allowing you to sit back and enjoy the artistic cutscenes that either take a minimalistic art style or fully voiced comic book scenes. The cinematography and voice acting during cutscenes are incredibly well done. Even during the comic strips, there are some fantastic story beats that tell so much from such minor details. However, there are a whole lot of cutscenes, especially towards the beginning. At times, they feel like they can go on for quite a while, more so than what they may have needed to.

Outside of the cutscenes and comic strips, the story presentation takes a bit of a nosedive. There are occasional parts that bring a miniscule amount of character to some officers, but in the end all of the units may as well be faceless and nameless. During gameplay, each character doesn’t seem to have much individual personality to them. All narration refers to officers as he/him, even if you are acting as a female officer. Also during combat, each unit looks exactly the same, which comes across as lazy. A little more effort to make characters that reflected each individual officer could have gone a long way to the characterization of officers that you don’t usually see throughout the main plot. The idea of permadeath only has an emotional stake if the player can form an emotional bond with the characters. Without the bond, they just feel like faceless numbers.

Lastly, there is a whole lot of reading to do during every mission, so be aware of that if you just want to play a game to take a break from all of that.

As previously mentioned, the art direction in This is the Police 2 is one of its most striking features. During all cutscenes and comic strip scenes, there are deliberately no textures in order to give it a clean cut presentation. This may seem a bit disjointing at first, but you very quickly grow accustomed to it. With the disclusion of textures, this saves on memory and requires less power from the console to run them at a smooth rate.

Outside of the cutscenes, the presentation feels nice and clean. There is nothing overlapping and it is all laid out well. The only issue with the art direction that we seemed to have was during the strategy RPG sections, where it was sometimes difficult to distinguish between walls and cover due to its awkward isometric camera angle and color palette choices.

During the cutscenes, there are moments where the music is so minimalistic (sometimes playing no music at all to really focus on the importance of the dialogue), whereas other times the music takes such a commanding presence that it draws out strong emotions from the scene.

However during gameplay it can also vary. We often found it to be very off-putting when trying to read through all of the police callouts when the soundtrack is playing jazz at approximately 200 beats per minute with a crazy saxophone solo over the top that sounds like it’s being played by a hyperactive monkey who has stolen some of the police’s “evidence” and cannot bring itself to come off of its high.

This is the Police 2 is a game that had a great amount of potential, however it falls flat on so many aspects that it just doesn’t live up to it. This game was certainly an ambitious project, however it lacks a clear direction that makes the game a chaotic mess. On top of this, frustrating gameplay beats and annoying bugs makes the game unbearable to play all the way through, which is a shame considering it could have proven to be a great game had Weappy taken a bit more time and focus with it.

Do you think that we were too harsh on this review? Or do you happen to agree? Let us know in the Comments section below. This is the Police 2 can be a little ambiguous when it comes to explaining things, and you may find yourself confused a few hours into the game. But don& 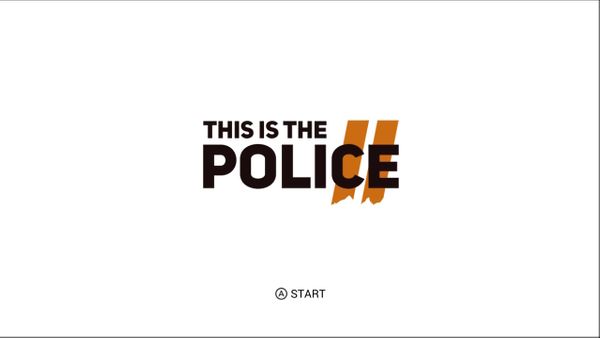 Developed by Weappy and published by Nordic Games, This is the Police 2 is a simulation strategy game that has you managing your officers in order to maintain peace in