The Messenger has received some brand new free DLC and just like we covered the game before, so too will we cover the additional content. Here is The Messenger totem Boss Guide…

With the three blocks floating in the air, use them as steps up to the head of the totem and lay into it.

Next, you’ll be on the ground and trying move around tornadoes coming your way. Make sure to jump over or through the gap of them or when there’re three, duck beneath them.

When the birds come out, make jump up them like stairs to get to the totem head.

The blocks will also slam down one at a time, shooting projectiles either side of them. Get on top of either the first or second block and attempt to jump over to the right block to reach the totem head, allowing you to avoid projectiles as well.

To finish stage 1, when the single block makes a drill underneath it, lead it to the far left. At the split second the drill begins to speed up, run to the right, avoiding its drill and creating a gaping hole.

Lightning rods will randomly spawn which will cause lightning bolts to shoot down from above. When this happens, look for a gap before the lightning begins to strike and make for it to avoid becoming a fried ninja.

When the blocks arrange themselves as shown below, cling to the right side of the middle block and when the time is right, jump to the right and use the rope dart to pull yourself to the right block in order to start wailing on the totem head.

When the blocks have the drill protruding again, make for the far right side and avoid it like we did last time. When it smashes into the ground, we can jump on top of them this time and get to the totem head to keep doing damage.

In stage 3, the totem will have the move shown below. To avoid the first run of the laser, jump onto the left block and position yourself as far to the left as you can.

When the totem makes for the right, jump onto the middle block and throw some shurikens at the head.

Don’t go jump onto the far right block as it becomes risky. Wait for the totem to make its way back to the middle block and start attacking.

There will also be another moment where the blocks move side-by-side. Jump onto the first block and use the rope dart to get to the second when it’s making its way to the right. Pull yourself up and jump towards the head.

The tornadoes in stage 3 will be a little more extreme and a lot quicker. It’s all pretty much the same aside from four tornadoes stacked on top of each other in which you’ll need to jump onto the bird first in order to jump over them.

Keep repeating all of these instructions and soon, the totem boss will be defeated! Throughout The Messenger’s Picnic Panic DLC, you can collect Mask Pieces in order to make something special. You’ll find five of these piece scattered throughout Voodkin 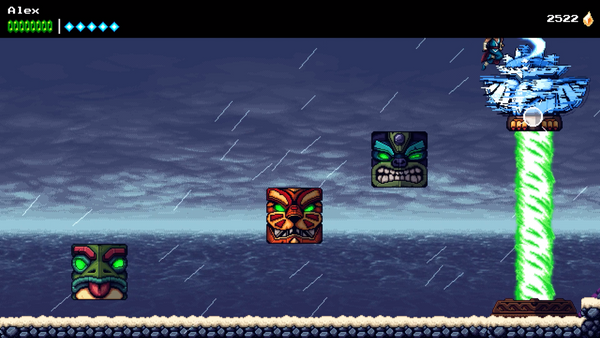 The Messenger has received some brand new free DLC and just like we covered the game before, so too will we cover the additional content. Here is The Messenger totem