The Messenger has received some brand new free DLC and just like we covered the game before, so too will we cover the additional content. Here is The Messenger Octopus Boss Guide…

First off, you’ll want to avoid being hit by the tentacles. You can easily move out of the way of these or you can speed up into them, your choice.

Next, you’ll want to dash into the ink balls that the octopus shoots at you. Doing so will bounce them back onto it; this is how you deal damage to this boss.

After that, the Octopus will send the middle tentacle towards you and then the two outer ones and repeat. Instead of trying to dodge these, it’s easier just to remain in the middle and dash through it when it comes towards you.

Wait for the octopus to start shooting ink balls at you again and when it’s dazed and dizzy, it will slowly come towards you. When it’s within range (about halfway towards you), dash directly into it, dealing it damage and allowing you to move onto stage 2.

For the first attack, the three tentacles will slither out in front of you. Wait for one to smack down into the water, move to it whilst dashing and wait there. Then move to get inline with the Octopus and dash into some more ink balls.

Be sure to avoid the spiky balls, they hurt!

Now the octopus will send some more of his tentacles out at you. Just be sure to stay on top of which tentacles are about to attack and dash through them.

The octopus is now going to be tricky with his ink balls. Do your best to follow his trajectories and be quick moving up and down.

After you’ve hit it enough, you’ll be able to dash into it and move onto…

Here’s where I died a lot, but it gets easier the quicker you realise that you just need to make sure to jump over the line of rocks that have the least amount in a row. I know that sounds obvious, but it’s more about being quick and honing your reflexes.

When the octopus comes back, it’ll send tentacle spikes up at you. To tell where they’re about to strike, focus on the bubbles coming towards you. Dash through one of them and stay there, it should only send one wave at you.

Keep doing your best to avoid the rocks during these segments and when they zigzag, simply pick the bottom or top row and stay there. That way you only need to focus on one line of rocks.

From here, you’ll have all the tools to beat the boss. Keep avoiding the rocks, tentacles and spikes and dash into the ink balls and you’ll eventually get the opportunity to dash into it one last time! Gaming on a budget? Well, look no further! You don’t have to spend $60 on every game you buy, there are some fantastic cheap Switch games for under 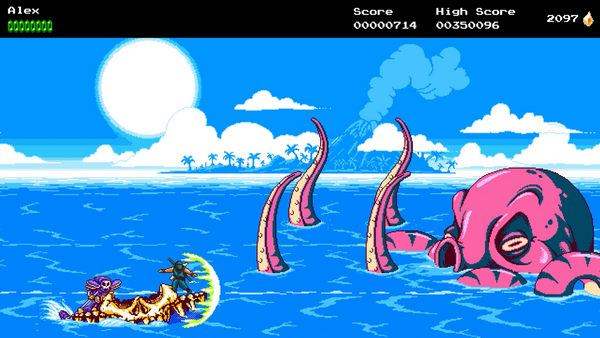 The Messenger has received some brand new free DLC and just like we covered the game before, so too will we cover the additional content. Here is The Messenger Octopus