The Low Road is a story-driven puzzle game that has you play as Noomi Kovaks, an employee at a spy agency on her first day. Set in the 1970s, this agency lacks the excitement that she was hoping for. However the agency is working on recovering a kidnapped scientist, and Noomi wants in on the action to work as a field agent.

The Low Road starts off with a fun puzzle that has you peering through pages of information in order to have a conversation with someone you don’t know. As you progress, there are more word puzzles that has you talking to NPCs, which can prove to be a little tedious. However, there are some interesting puzzles that require a lot of thought and careful deliberation.

Controlling Noomi feels awkward and clunky, with odd animations and delayed movements. It makes interacting with the environment cumbersome and frustrating at times. The awkward animations prove to be more tiresome when you aren’t sure on how to progress, leading to a lot of backtracking whilst moving at a slow and frustrating pace. The control scheme is unintuitive, making the simplest of tasks a chore. This is made most notably when solving puzzles, with the peculiar design choice of having to move the arm with the right analogue stick and not the left.

When solving puzzles, the perspective shifts to first-person and requires you to guide the agent’s hand to solve them. With the Switch’s touch screen mechanic, you’d think that implementing this control option would’ve been a no-brainer, but instead it forces you to use regular controls, making it awkward and janky. These puzzles also have the agent’s arm present for the sake of realism, but it often just gets in the way of seeing the rest of the puzzle. This control scheme doesn’t make things impossible, and it is something that you quickly get use to, but it is a learning curve to get your head around in a short 3-4 hour game.

The variety of puzzles range from pickpocketing, to shifting gears, to using a blowtorch on metal grates. Considering all of the different feelings that could come from these puzzles, it is disappointing that XGen Studios didn’t incorporate HD Rumble to provide a nice sense of tactile feedback that we know the Joy-Cons and Pro Controller are capable of.

The environments in The Low Road are straightforward and simple. This works to the game’s strengths, as it helps you to distinguish between objects and NPCs that you can interact with. However, you may often find that the slow pace of the characters can result in some frustratingly boring moments when needing to walk from one side to the other (or especially when you’re confused as to where to go next). The world design is ultimately simplistic, which adds to The Low Road’s strengths, however the game clearly suffers from mechanics that makes these chapter levels frustrating to traverse.

The Low Road’s biggest strength is its story and character presentation. The Low Road takes place across six chapters that breaks the game up evenly and in appropriate sections.

The plot takes many twists and turns throughout its 3-4 hour story. You’ll get to know a variety of characters, each with their own unique backstories and motivations. And yet The Low Road’s most memorable attribute is its dialogue, specifically its humor. The Low Road has particularly dry humor that may not hit home for everyone, but it is all well delivered with high quality voice acting. Many of the characters are certainly unique, with dialogue that leaves each character memorable and distinguishable.

The final boss (so to speak) is a witty take considering The Low Road’s limited gameplay mechanics, with some truly interesting final story beats to leave the player thinking well after the credits role.

The music primarily takes a back seat, providing background noise that rarely becomes a main focus. This works perfectly for the style of game that The Low Road is as it allows you to easily hear the dialogue and important sound effects.

As previously stated, every line is voice acted and well delivered. Not once did a character’s dialogue feel awkward or out of place, something that is rarely found in the indie video game medium.

The art style in The Low Road is instantly striking, with detailed backgrounds and a lot to interact with. It captures the 1970s vibe perfectly, whilst accentuating the plot’s wackiness at opportune moments. Objects in the background that you can interact with stand out well, allowing progression through the game without much confusion.

The Low Road is a fantastic story-based game that is full of dry humor and well-paced plot development. The characters are easily relatable, bursting with their own individual personality without overshadowing each other. The presentation is well done in the visual and audio departments, however it severely lacks when it comes to the quality of the gameplay mechanics. Walking, interacting with objects and NPCs and doing puzzles feel clunky and awkward, ultimately being a real detriment to an otherwise enjoyable experience.

Will you be checking out The Low Road? Let us know in the Comments section below. 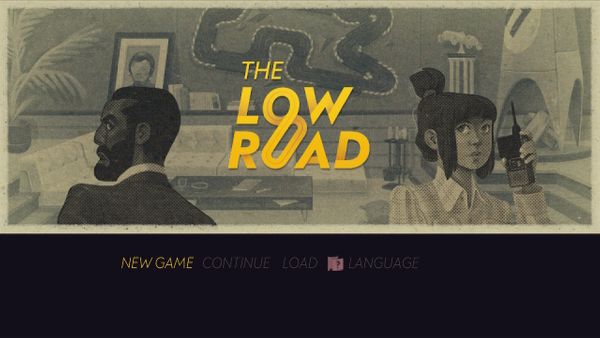 The Low Road is a story-driven puzzle game that has you play as Noomi Kovaks, an employee at a spy agency on her first day. Set in the 1970s, this