Setting sail after his epic adventure in the SNES classic The Legend of Zelda: A Link to the Past, Link has found himself shipwrecked on a lone Koholint Island. His only hope of escape is to awaken the Wind Fish in an egg that is perched at the top of the mountain and to do this, he must find and collect all eight instruments to play the Ballad of the Wind Fish. But not all may be as it appears in this Game Boy classic reimagined for the Nintendo Switch.

As has proven to be tried and true, the gameplay in The Legend of Zelda: Link’s Awakening is stellar. It’s easy to pick up and grasp for new players and nostalgic for those who grew up playing the game in the backseat of a car at night time desperately attempting to find a source of light to even see it.

The original Link’s Awakening, much like most entries of the Legend of Zelda franchise at the time, controlled as you would expect with a standard D-Pad. Your directional choices were up, down, left and right, with additional option of moving diagonally. This is recreated in the remake and whilst it may seem jarring for newcomers, the game is laid out in such a way that thrives on limited movement.

Whilst there are enemies to defeat, secrets to find and dungeons to conquer, a large portion of the game revolves around the item trading sequences. This involves you interacting with NPCs and finding the correct item to give to another, which most commonly will reward you with another item to give to someone else and ultimately allowing you to progress through the game. The remake has streamlined this by being more ‘on the nose’ about where you need to go next. There is even a Memories menu when looking at the map that allows you to look back at all of the Owl’s Speeches and places where you have found Heart Containers and Secret seashells. At the end of the day, it comes down to the individual as to whether this is a good thing or not as some may chalk it up to simplifying the experience.

As was the case for old-school Game Boy games, Link’s Awakening focusses heavily on problem solving and getting the most out of the game with the least amount of memory space. The game also seems stretched out by a lot of tedious fetching and you may often find yourself confused as to what to do next. There are telephone huts that allow you to speak to Old Man Ulrira who provides hints as to what to do next, but some hints are too obvious whilst others way too vague. This is one part of Link’s Awakening that doesn’t translate well to a modern era of gaming.

Enjoying our Link’s Awakening Switch review so far? Don’t forget to like us on Facebook and follow us on Twitter for more Nintendo Switch content. Also, please consider supporting us on Patreon so that we can continue to do what we love doing.

There are some unfortunate frame rate dips at the time of launch which, whilst not ruining the game by any means, puts a slight dampener on the experience. It’s subtle and seems to primarily happen when moving from one area to the next, but it slows the game down tremendously. When the game runs well, it’s silky smooth and feels great, so it seems we’re just going to have to wait for that performance patch update.

Dampé makes his appearance in Link’s Awakening for the first time with the Dungeon Arranger. This essentially acts as a bite-sized Legend of Zelda Maker that we all hope becomes fully-realised in another iteration (or even as a stand-alone title). When you beat dungeons throughout the adventure, you’ll unlock more tiles that allow you to further customise your own dungeons. These can then be saved to the Link’s Awakening Amiibo so you can take your dungeons with you and let your friends play through them. It’s a neat addition that adds replayability to a game that could’ve felt one and done.

I was surprised to uncover that the game features absolutely no HD Rumble, especially since Eiji Aonuma himself has expressed deep interest in force feedback. A little bit of vibration here and there could have gone a long way as we have certainly grown to appreciate it since the launch of the Switch console, but perhaps they wanted fans to see this as more of a portable experience considering that the game launched alongside the Switch Lite… who’s to say?

Some may find Link’s movements to be a little too slow-paced for their liking and the backtracking involved with the trading sequence can prove to be heighten this. However, you may be happy to note that you no longer have to wait for each screen frame to load thanks to the console remake, which saves A LOT of time when traversing the world. In addition to this, the map is much more detailed, with every nook and cranny specifically laid out in order to determine what is where. You’ll also have the ability to fast travel more as you explore the world and the Pegasus Boots allows you to dash run. Lastly, the map allows you to place pins on it which saves you from tirelessly needing to remember where the closest Fairy Fountain is or some treasure that you need to find a key item for.

As this is a remake of a classic 90s Legend of Zelda title, this entry contains the old-school dungeon layout that long-time fans may have missed with Breath of the Wild. On the other side of that same coin, players who started with Breath of the Wild may take some time adjusting to it. For one such as myself who has loved the Legend of Zelda series for decades, it’s nice to return to that classic formula once in a while.

For what was initially a greyscale sprite-based adventure game built on bare minimal hardware, Link’s Awakening has always been praised for its plot. Without giving away too much for those yet to experience it, the story makes you question your motives, challenging the hero trope in order to pull on your heartstrings. By today’s standards, a game such as this would most likely have multiple choice endings but after a lot of thought, Link’s Awakening would not have benefited from this as the plot culminates to leave us with a product that challenges our ideas of morality within video games.

The charm and wit of the characters’ dialogues has not been lost in the remake either, rather they’ve been heightened by this gorgeous reimagining. Each line that is delivered from NPCs is endearing and worth a goofy smile on your face. Whilst the item trading and backtracking may be tedious at times, each character that you interact with along the way is charming and memorable, bringing the odd sense of wackiness that this entry was known to stand out for.

During that infamous Nintendo Direct when the remake was announced, fans were divided as to how different the art style appeared to be. However upon playing through the game and controlling Link, the environments blend seamlessly. The toy-like aesthetic is absolutely adorable and it suits the reimagined Game Boy motif in every aspect. Couple all that with a focus effect that borders the screen and it simply makes the action pop in the centre.

The attention to detail is phenomenal, going that extra mile to ensure that Koholint Island feels alive and populated. Down to the odd shell on the beach, plates on a table and weeds growing through the cracks, each environment spared no expense in recreating what we all saw in our minds playing this game 26 years ago.

The original Game Boy entry took some creative liberty to include familiar characters from other Nintendo franchises, with the inclusions of Goombas, BowWow the Chain Chomp, a Yoshi doll and much more. Now in 2019, with these characters becoming much more established and reimagined in HD, they come to life in such a way that is pure joy for any Nintendo fan.

Click here to read our review of The Sinking City

The music is just… incredible! The reimagining of the chip-tune soundtrack that came from that tiny little Game Boy speaker now coming out of modern sound systems will make your heart swoon. And the remake does not forget its roots with occasional chip-tune segments slipped back in, making your childhood come back in full swing. I don’t know about you, but I could close my eyes and listen to this soundtrack for hours on end.

The Legend of Zelda: Link’s Awakening is one of the best 2D Zelda games ever made and this remake does it every bit of justice. Despite some mechanics feeling outdated, the gorgeous presentation and iconic plot will make you look back with nothing but fond memories. It is truly the Link’s Awakening remake that we’ve all been waiting for.

Thank you for checking out our Link’s Awakening Switch Review and thank you to our $5 and up Patreon Backer for their ongoing support: For this week’s Switch Kickstarter Project of the Week, we will be looking at JanduSoft’s Indiecalypse. The game is slated to release in Q4 2019 on PC and 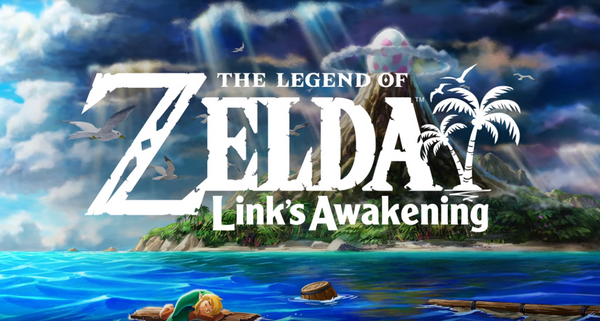 Setting sail after his epic adventure in the SNES classic The Legend of Zelda: A Link to the Past, Link has found himself shipwrecked on a lone Koholint Island. His