As part of the long running Swords and Sandals series, this new action platformer entry takes us back to Ancient Rome, fighting for freedom as the legendary Spartacus. Escape from the shackles of slavery, rally others towards your cause and take down any who stand in your way.

Controlling Spartacus is simple and intuitive, with fluent action gameplay that is easy to pickup and roll with. The control scheme isn’t particularly complicated, being jump, attack, and throwing ranged weapons with the X button. Combat is quick and simple and the shield activates automatically, yet despite how seamless the gameplay controls are, I found that enemy hitbox detection can be obscenely inaccurate, making combat lack strategy and precision.

The game has a satisfying skill upgrade system that rewards exploring for treasure in hidden and hard to reach areas. The player can also destroy checkpoints for extra treasure, creating a great risk/reward system. At the end of each level, you can trade in the treasure for statistical upgrades or if you’re not playing on Casual Mode, extra lives.

Enjoying our Swords and Sandals: Spartacus Switch review so far? Don’t forget to like us on Facebook and follow us on Twitter for more Nintendo Switch content. Also, please consider supporting us on Patreon so that we can continue to do what we love doing.

Upon booting up the game, its four difficulty options are based around how many lives you start with. Permadeath Mode has you starting with only one for a real challenge or if you’re more curious about the story of Spartacus, Casual Mode gives you unlimited lives. Due to some of the game’s pitfalls and leap of faith moments, Casual Mode is the best way to ensure that you won’t be pulling your hair out by the end of it.

The level designs are much more obtuse than they need to be, with occasional dead-ends and awkward progression. With only one being excusable, there were far too many leap of faith moments that caused for multiple unwarranted deaths. For the most part, the levels were a lot of fun with wonderful challenge variety, but I couldn’t help but sigh in frustration when the answer was to simply jump into the abyss.

Swords and Sandals: Spartacus acts as an interactive history lesson, which is very enticing for those who love to learn about the Roman Empire. Textboxes of characters interacting progresses the plot between levels and you can also find scrolls within each level to uncover more lore about the history of Spartacus the gladiator.

The art aesthetic is oddly nostalgic, seemingly taken from either an 80s arcade machine or the Sega Mega Drive/Genesis. The fine details within slave prisons and running past the picturesque view of Mt Vesuvius highlights the setting well and despite a slight lack of polish that made my eyes strain from time-to-time, I often found myself enamoured and captivated.

Despite the game’s soundtrack adopting a rousing gladiator motif, it often resorted to prolonged repetition. It paints its picture well, but it didn’t do much to stray away from the expected norm.

A glaring issue with the sound design would have to be the audio mastering during moments of voice acting. The music’s volume would often be up too high and along with some awkward line delivery, it had me straining to hear what was being said.

Click here to read/watch our review of Story of Seasons: Friends of Mineral Town

Swords and Sandals: Spartacus is a great entry into the long-running series, however its issues are glaringly apparent. While its level design missteps can make the experience frustrating at times, its swiftly responsive gameplay and Ancient Rome setting makes it an enjoyable time overall, with the caveat of not playing on a hard difficulty.

Thank you for checking out our Swords and Sandals: Spartacus switch review, thank you to Marvelous for providing the review code and thank you to our $5 and up Patreon Backers for their ongoing support:

If you’ve finished Assassin’s Creed IV: Black Flag and have exhausted all One Piece games on Switch, then perhaps King of Seas may be the next 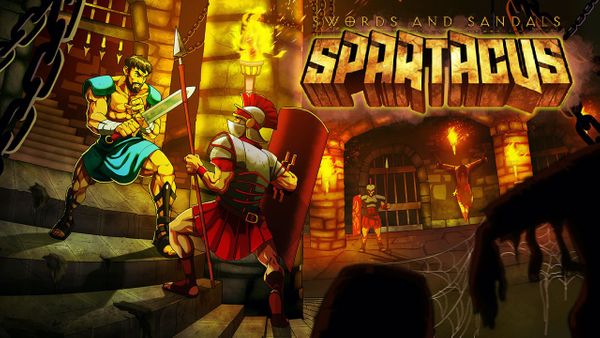