Last night, I had some friends over to play Super Mario Party. After we played a few rounds of the regular Mario Party, we tried out Toad’s Rec Room. Once we had played Shell Shocked Deluxe and Puzzle Hustle, we got around to Mini League Baseball. After playing a few innings, the layout and its aesthetics began to look a little familiar.

On first glance, this mini-game may just seem like any other, but notice the field’s cardboard/plastic material aesthetics. The foliage, the catchers, the pitching contraption, it all sort of looks like a board game, wouldn’t you say?

Nintendo has a long and rich history. The company was formed in 1889 and has dabbled in many different ventures, such as: Hanafuda Playing Cards, taxi services and even love hotels (click here to learn more about the history of Nintendo). More importantly, Nintendo created toys and board games, and it was knowing this that I realized that Super Mario Party’s Mini League Baseball reminded me of a baseball board game that the Big N had released in 1965.

Nintendo’s Baseball Board
Before Mario

This wouldn’t be the first time that Nintendo has taken inspiration from their past. The Nintendo Ultra Hand was also made into a WiiWare title…

Do you remember any other instances where Nintendo has drawn inspiration from their own past? Let us know in the Comment section below. Masahiro Sakurai was born on August 3, 1970 in Musashimurayama, Tokyo, Japan. Growing up, he loved playing video games. He was approximately five years old when he played his first 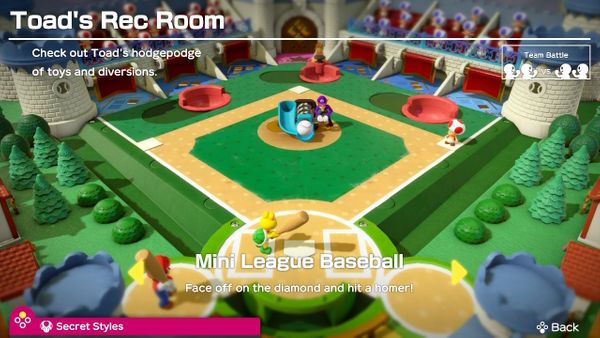