Ever since the original Super Mario Maker launched on Wii U, fans were clambering to be able to make your own overworld. Now, with the final update, you can. Check it out:

In World Maker mode, multiple courses created by a user can be tied together on a path from the starting point on a world map to the end castle. The look of the world map can also be customised. Up to eight worlds containing a total of up to 40 courses can be combined, creating a mini Super Mario game that can be shared* with others.

In addition to World Maker, guess who else is making an appearance in Super Mario Maker 2? The Koopalings! All seven of these troublemakers, each with his or her own movement pattern, can be added to user-created courses. Other enemies added to the game include the key-chasing Phanto and the wind-up Mechakoopas.

Additional power-ups and course parts are also coming to Super Mario Maker 2 as part of the free update. This includes the SMB2 Mushroom, which transforms Mario and friends into their look from Super Mario Bros. 2 and allows them to pick up and throw items and enemies – just like in that classic game! With the Frog Suit from Super Mario Bros. 3, Mario can swim through water with ease, and even run across its surface! Other power-ups added to the game are the Power Balloon first introduced in Super Mario World, the Super Acorn from New Super Mario Bros. U and the Boomerang Flower from Super Mario 3D World. From the same game, there are also five variations for wearables like the Cannon Box and Propeller Box.

Also, there’s good news for fans of Mario Kart Tour: both Builder Mario and Builder Toad are making an appearance on the racetrack in the Mario Kart Tour game available for smart devices. During the Trick Tour from 22nd April at 16:00 AEST to 6th May at 15:59 AEST, players can try to acquire these hardhat-wearing drivers and use them as they race to earn rewards or challenge friends in online multiplayer.

The final update for Super Mario Maker 2 on Nintendo Switch will be available to download for free on 22nd April. It includes World Maker mode, which gives players the option of creating their very own world maps for the first time, along with a host of new course parts, including new enemies and power-ups. With Animal Crossing: New Horizons being played on so many Switch owners’ console right now, Nintendo have outlined their plans for the next month: Leif’s Garden Shop 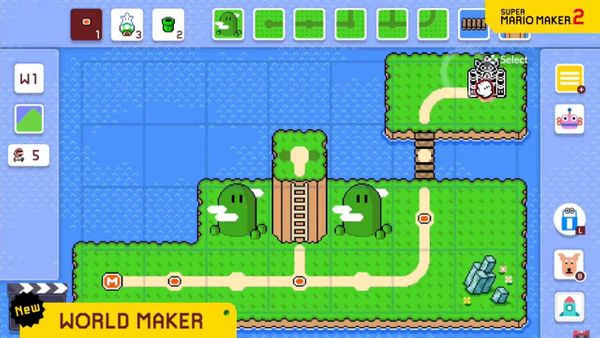 Ever since the original Super Mario Maker launched on Wii U, fans were clambering to be able to make your own overworld. Now, with the final update, you can. Check