This may well be the hardest game (or game collection, if you will) that I have ever had to review. It’s difficult to have a unique opinion about some of the most iconic 3D platformers in video game history, therefore I have decided to approach this a review purely on Super Mario 3D All-Stars collection aspect and whether it’s worth the full retail price tag.

These three Super Mario titles were all revolutionary in their time and it’s not just nostalgia speaking when I say that they are memorable for a reason. The charm, slick controls and revisiting it all on the Nintendo Switch where you can take it anywhere allows you to play these games like never before. The games also now feature rumble feedback which adds a lot more depth to their original iterations.

That isn’t to say that these games are without flaws. Super Mario 64 first released on the Nintendo 64 a whopping 24 years ago and it’s clear just how much evolution exploring a 3D space has been subject to since. This inexperience becomes painfully noticeable when you’re competing with the Lakitu camera to perform an action that would be deemed basic to today’s standards. It’s all excusable when you consider the game’s age and what it managed to do in the mid 90s, but they’ll certainly smudge those rose-tinted glasses that many of us have been wearing all these years.

Super Mario Sunshine takes on board all that Super Mario 64 struggled with, taking the 3D platforming genre to new heights with the help of F.L.U.D.D. The concern that fans have always had with Sunshine coming to the Switch was how players can control F.L.U.D.D. as the analogue triggers on the GameCube controller, along with the click when pushing the trigger all the way in, would dictate your control of the contraption and subsequently, Mario’s movements. It appears that we may have slightly overthought this process as all Nintendo did was map these two control options to two separate buttons – simple!

Enjoying our Super Mario 3D All-Stars Switch review so far? Don’t forget to like us on Facebook and follow us on Twitter for more Nintendo Switch content. Also, please consider supporting us on Patreon so that we can continue to do what we love doing.

Speaking of how Nintendo would make specific actions work, Super Mario Galaxy heavily relied on the Wii Remote pointer to collect Star Bits. This, too, was fixed with a simple solution: by either using the right Joy-Con with motion controls (thereby replicating the original Wii Remote and Nunchuck play style) or if you’re using the Joy-Cons in a grip/Pro Controller, you can use the gyro sensors to control the cursor (which is surprisingly intuitive). This all works seamlessly, however it is anything but seamless in handheld mode. To control that cursor, you must use the touchscreen, which is unbearably counterintuitive when you want to quickly pick up Star Bits or even aim to shoot them. Play Super Mario Galaxy in docked mode and not handheld, trust me.

The argument that Nintendo hasn’t done enough to polish these games graphically (especially Super Mario 64) is an interesting one. If you want my opinion – which you do as you’re reading this review – is that stripping down and remaking Super Mario 64 from the ground up is like stripping down and remaking a Lamborgini: whether you do it or not, it’s always going to be a Lamborghini at the end of the day; it’s impressive and beautiful either way so let’s just have fun driving it.

The most dramatic improvement in the Super Mario 3D All-Stars collection is undisputedly Super Mario Sunshine. Not only is it spruced up to make the detailed GameCube models look how Nintendo always wanted them to but now, being able to play it natively in widescreen, it makes the tropical holiday resort of Isle Delfino feel grand and expansive. Don’t get me wrong, Super Mario Galaxy in HD and Super Mario 64 touched up look incredible, but it simply looks how we all thought it did back when we first played them; in this collection, Super Mario Sunshine ultimately feels tangibly upgraded.

How good is the music in these games? Seriously! Koji Kondo is an absolute musical genius who should be studied alongside Ludwig van Beethoven and Antonio Vivaldi; I might be a little bias as nostalgia and having an entertaining, interactive visual aid to compliment it may help its cause, but his work is simply incredible. Super Mario 3D All-Stars has all three of Kondo’s works in a music player within the collection and it is simply magical, albeit a little difficult to listen to on the go considering the Switch is approximately four times the size of a mobile phone.

Click here to read our review of Paper Mario: The Origami King

Being able to so conveniently play three revolutionary 3D Super Mario titles on Nintendo Switch in just a single cartridge is truly wonderful. Having these games upscaled and enhanced for modern TVs will allow many modern gamers to delve into these iconic titles with ease of accessibility. The only baffling aspect about Super Mario 3D All-Stars is its glaring omission of Super Mario Galaxy 2; it just feels incomplete without it.

Thank you for checking out our Super Mario 3D All-Stars switch review, thank you to Nintendo AU/NZ for providing the review code and thank you to our $5 and up Patreon Backers for their ongoing support:

For this week’s Switch Kickstarter Project of the Week, we will be looking at 2for2’s KAPIA. The game is slated to release July 2021 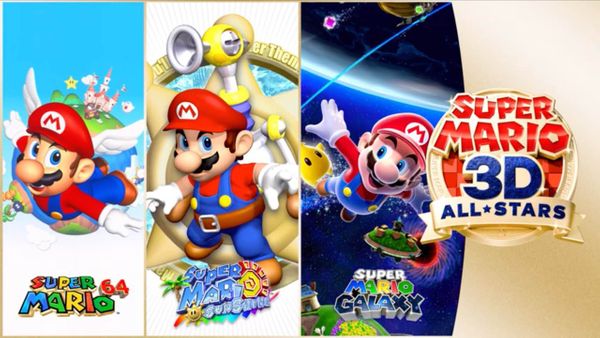 This may well be the hardest game (or game collection, if you will) that I have ever had to review. It’s difficult to have a unique opinion about