The clattering of the mechanical keyboard in the eerily silent room is heightened by the old CRT monitor whizzing away with the text adventure game getting all too real. It’s a phenomenal introduction to a stellar experience that only gets better as the story unwinds.

Stories Untold has four episodes and each tells a short horror story that places you quite literally in the seat of the protagonist. Whilst they, at first, appear disconnected, they are all intertwined in subtle ways that make the pay-off from the finale all the more engaging.

The first chapter puts you at a desk with a text-adventure game on the screen of your monitor. It was an exciting sight to see something so retro and nostalgic brought to life on a brand new, innovative and modern console. The brilliantly written narrative told me that I was sat in my car, arriving at an old family home. From there, the mundane beginnings lead into a thrilling ride of horror and as basic as the gameplay was, its simplicity enhanced the atmospheric terror.

In the second chapter, you handle experiments and interact with your environments in a puzzle-solving manner whilst in the third, you’re trying to decode radio transmissions in the Arctic. These puzzles are engaging and difficult which more than makes up for the short runtime of the experience. Quality over quantity is something the developers truly took to heart and it’s great that they did.

Enjoying our Stories Untold Switch review so far? Don’t forget to like us on Facebook and follow us on Twitter for more Nintendo Switch content. Also, please consider supporting us on Patreon so that we can continue to do what we love doing.

On a Nintendo Switch, it may seem as though the experience would be somewhat hindered but the text adventure game is made to work in this new format and the interactivity with the environment is fluid and responsive. It’s a great port.

The very core of the story is unbelievably reminiscent of Black Mirror and I won’t delve into any spoilers, but that eerie sense of technology going amiss, playing on tropes and cliches of various genres, is all incredibly rich within Stories Untold’s foundation.

The atmosphere feels like a lot of true horror stories, the very kind you’d find a plethora of on YouTube. There’s that old radio chapter in which you decode transmissions that gives you a sense of unease which stems from the isolated setting and there’re the nerves that stem from the text adventure game bleeding into reality.

In terms of narrative, Untold Stories’ priority is, as the name would suggest, exactly that. It’s not the same kind of storytelling as something like God of War for the PS4, rather it is an immersive, subtle and mysterious world that unravels with each moment. There’s a lot to dig your teeth into and it’s rarely explicit or blatant, adding to that atmospheric horror so perfectly crafted.

In terms of graphics, the game is your bog-standard 3D designed experience but it has that aura of 80s horror, not too dissimilar to the very same atmospheric tones that Stranger Things tap into. In that sense, whilst it isn’t particularly groundbreaking in terms of its graphics, it feels like an interactive horror film that is only elevated by the designs of the limited surroundings that you can see from your small window as the player.

What truly stood out was the design of the logo of The House of Abandon in the first chapter. The glaring CRT TV with its red and blue lines and eerie undetailed image that has striking white and black colors all made for an eerily haunting sight. Toppled with brilliant sound design, the uncomfortable quietness only makes your hairs stand up more.

The VHS-tape and the 80s themes are all brought to life spectacularly by the stellar music and the brilliant sound design. The flaws of the technology of old are not just present in design but also in their sound which adds a layer of tangibility to the experience, elevating the horror aspect that it so easily slips into. From the alarm that blares to the eerie radio, everything is animated through sound to an extraordinary degree.

Whilst the game is fairly short, clocking in at a runtime of about 3-4 hours, it is a brilliant experience all the same. A few more chapters wouldn’t hurt, but the talented indie developers of Glasgow-based studio No Code managed to create an interactive experience that puts Black Mirror’s attempt with Bandersnatch to shame.

Thank you for checking out our Stories Untold Switch review and thank you to our $5 and up Patreon Backers for their ongoing support:

Demon Pit is a fast-paced arena shooter with classic 90s retro graphics that resemble first-person shooters on PC during that era. Play as a demon hunter whose soul has been 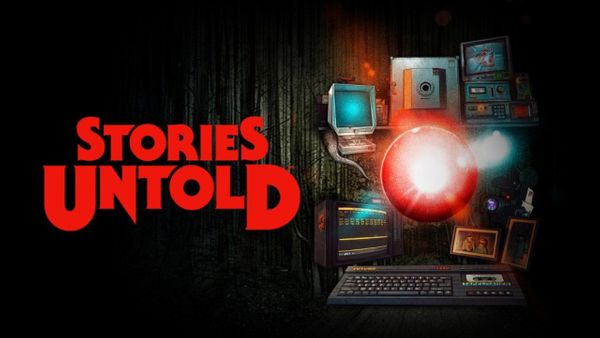 The clattering of the mechanical keyboard in the eerily silent room is heightened by the old CRT monitor whizzing away with the text adventure game getting all too real. It&