Relive the glory days of gaming with Squidlit, a charming platforming adventure that is faithful to the Game Boy hardware. In Squidlit, evil is afoot, and your little squid friend must jump, ink enemies and eat muffins to save the land. Stop the villainous Skwit Skwot in all of Squidlit’s puke-green goodness.

You don’t need to be a pro to be able to play Squidlit. The controls are simple, yet effective; move, jump and double jump to squirt ink downward at enemies. It’s not complex, but it aims to help players relive simpler times in gaming.

The gameplay is smooth, however the camera work can be quite jarring. Your Squidlit character friend always remains in the centre of the screen, making it difficult to see what is to come below you as well as what you are about to attack. It also causes the screen to often feel unsteady, which can be a bit of an eye sore.

Each level has its own boss fight and this is where Squidlit’s creativity truly shines. Each boss has its own quirk that alters the standard formula, whether it becomes a side-scrolling SHMUP or a magical book where when you were to jump into it, your goal is to ink out the words. They’re simple changes, but it adds so much personality to what was already a charming experience.

Enjoying our Squidlit Switch review so far? Don’t forget to like us on Facebook and follow us on Twitter for more Nintendo Switch content. Also, please consider supporting us on Patreon so that we can continue to do what we love doing.

Be aware that Squidlit is a very short game. I was incredibly surprised to see the credits roll as soon as they did. The game is certainly charming and it runs very well, so I absolutely wanted it to last much longer. As this is Squidlit Ink’s first game, I hope to see more from them soon with longer adventures.

The levels start off simple and basic, but they soon become increasingly complex with platforming puzzles and unique enemies. As previously mentioned, the boss fights are where the game is injected with an extra dose of creativity. The levels’ layouts are straightforward to the point where you’d swear that you’re actually playing a Game Boy game, however as I said before, I just wish there was more of this adventure to delve into.

Squidlit’s plot is a simple one; you’re an innocent protagonist who is on a quest to foil the evil plans of a menacing antagonist. It doesn’t do too much to break the mould, but it’s the setting that makes it stand out.

NPCs are charmingly cute and their dialogue is often comical, often making me smile. On top of that, your dialogue options are also humorous to the point where I felt that our squid friend’s sarcastic quips come from a place of lighthearted innocence.

The art direction is most likely what has brought you to be interested in Squidlit. The retro Game Boy aesthetic is seamless to a point where you could swear that you were playing a genuine game from the late 80s/early 90s.

Squidlit Ink have gone out of their way to make sure that this game truly replicates retro Game Boy games. Limited sprites, that classic green/yellow colour palette and a 160 x 144 pixel resolution brings me back to the days of Super Mario Land and Kirby’s Dream Land with nostalgic bliss. It is all so faithful that there’s so much beauty in its simplicity. Also if you dock the game and play it on the TV, it’ll feel like you’re playing on a Super Game Boy with its optional screen border (I even played some of it with the wireless Super Nintendo controller which felt truly authentic).

Speaking of replicating the Game Boy, Squidlit’s soundtrack sounds as if it was taken straight out of a familiar square cartridge. Fun fact: Squidlit began as an experiment for the game’s creator to make music on a Game Boy. As soon as you hear the first track, you’ll know that they succeeded. The soundtrack was made entirely on real hardware and is quite possibly a wonderful standout to this game’s presentation.

Squidlit is a charming adventure with accurate Game Boy aesthetics and nostalgic chiptune tracks. I had a lot of fun with Squidlit, so much so that I was disappointed when I learned that the game in its entirety can be completed within a half hour, which is most likely why it is listed with a $2USD price tag. I hope to see much more from Squidlit Ink in the future with “Retro-Recreations” that I can delve further into.

Thank you for checking out our Squidlit Switch review and thank you to our $5 and up Patreon Backers for their ongoing support: Back in 2006, Pokémon Mystery Dungeon Red and Blue Rescue Teams announced for Game Boy Advance and Nintendo DS. Now, the games are combining into one game that’s 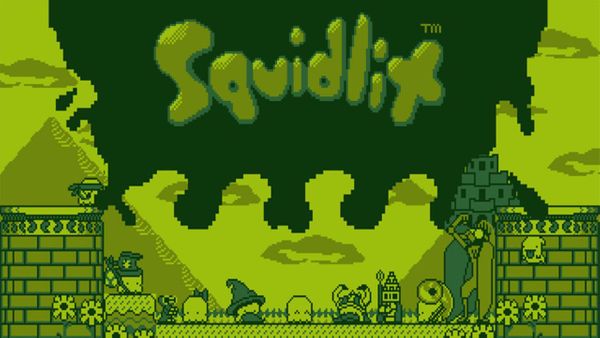 Relive the glory days of gaming with Squidlit, a charming platforming adventure that is faithful to the Game Boy hardware. In Squidlit, evil is afoot, and your little squid friend