Have you ever wanted to play a Splatoon 2D platformer? Well, that’s pretty much what Splasher is. This game relies on using your paint gun to splatter your surroundings, climb up walls, bounce all over the place and defeat your enemies. Stop the evil scientist from executing his evil scheme and save the factory’s employees along the way. Splasher is a truly unique tough-as-nails platformer with great art and crisp aesthetics, albeit lacking in variety and intuitive controls.

The first thing you’ll notice is that Splasher has a crisp and colorful art style, giving the game a comical aesthetic. The art style and the choice of paint colors makes it easy to differentiate between hazards.

Splasher’s use of the gun really opens up the gameplay and the levels consistently rely on utilizing this unique feature. You first start off without a gun, and the levels can seem slow and tedious, however when you unlock more options, the game opens up in new and challenging ways. Utilizing paint and washing it away with water is an ingenious twist on the platformer genre and certainly provides a unique experience.

We have to stress that this game relies on quick reflexes and on-the-spot decision making. The fast-paced nature of the game will appeal to any speedrunner.

You will die… A LOT. However once you get the hang of the mechanics, you’ll soon be zipping and zooming from one platform to the other. The game is a tough-as-nails platformer that was revolutionized by titles such as Super Meat Boy and Celeste.

Splasher has upbeat music that gets your heart pumping, a perfect soundtrack to such a hectic game.

In each level, there are extra challenges that require you to collect seven workers in order to spell out the word “Splash!”. The game encourages you to collect them in order to unlock the final and bonus stages. These challenges are often cleverly designed and will require some platforming skill.

There is also a time attack mode that will truly test your skills.

Finally, the final boss fight is an absolutely epic challenge – a perfect way to cap off the game.

Whilst Splasher does run perfectly without many technical hiccups, there are still some mechanical issues that we personally experienced issues with. Not able to stand still and shoot diagonally is the first issue that was instantly noticeable, which created some frustrating deaths in tight spaces. However, there is an automatic lock-on feature, but it’s not perfect and you need to move the character to adjust it.

The controls can often feel unintuitive, sometimes feeling very awkward to pull off required maneuvers. The button choices to shoot will get confusing and having to quickly swap between each one towards the end gets complicated and confusing.

Jumps are often very difficult to accurately time and can feel too floaty. You will get use to the physics of the game, but it is very off-putting at first.

Lastly, don’t expect to see any variety in terms of backgrounds and themes. So if you’re a fan of the art style, that’s good because you’re going to have to be seeing it a lot. None of the levels are memorable because they all look like carbon copies of each other.  This is the same with the music as it can also get quite repetitive. The only thing that changes are the platforming challenges themselves. This makes the game feel as though the plot and story aren’t progressing.

Splasher certainly has a unique flavour to it and should be on any speedrunner’s radar. The mechanics are unique and certainly provide a fascinating twist to the 2D platforming genre. However, the implementation of these mechanics would have benefited from some more consideration.

The art style and music are engaging and crisp which instantly catches the eye, however Splasher could have greatly benefited from some more variety.

And be prepared to get frustrated… A LOT!

Do you think we were fair with this review? Have you played this game and have a different opinion from us? Let us know in the comment section below. Nintendo Labo has been shown off in many ways, recently being on Jimmy Fallon with Ariana Grande. But now, a video has dropped of the composer of Game of Thrones 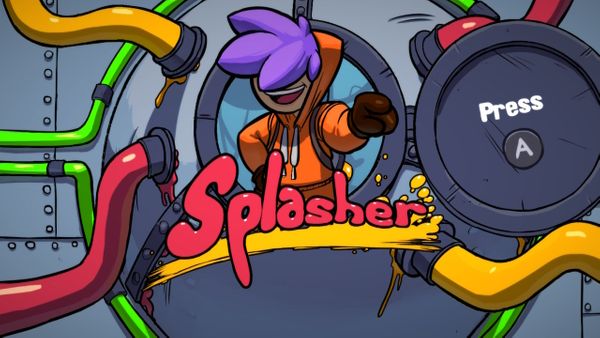 Have you ever wanted to play a Splatoon 2D platformer? Well, that’s pretty much what Splasher is. This game relies on using your paint gun to splatter your