In Snack World: The Dungeon Crawl – Gold, there are assisting monsters known as Snacks. These snacks act as friendly familiars that can either fight alongside you as Party Snacks or can be summoned as Pocket Snacks during quests. We’ll start the adventure with one but how do we get more?

How to Recruit Snacks

Snacks can be found on Story Quests, simply as regular enemies. Upon defeating an enemy that is eligible to recruit, a text bubble will appear above you saying “Photo Opportunity!”.

You’ll see a pulsating aura around the enemy that indicates that you can attempt to recruit it. When you walk up to it, you’ll notice a Snack Card speech bubble appear above you, indicating that you can start the process by pressing A. Watch out for the time ticking down above it though as it won’t wait around for you forever.

When activating the Pix-e Pod, you’ll activate a mini-game called Snack Shot Chance that will require you to take a photo as soon as the Snack is in focus. After the countdown, press the A button when the ring closes in on the circle of the lens as shown below.

You will have a few attempts at this, however you have a time limit as is indicated by the battery in the top-left corner of the screen. But once you press the A button when the ring is on the circle and the creature is in focus, the Snack will be yours!

I’ve Caught One, Now What?

Now that you’ve captured a Snack, it is your buddy that can be used as either a Party Snack or a Pocket Snack. A Party Snack is one that will follow you around in battle and assist in its own way and Pocket Snacks are a temporary Snack that will appear for a limited time.

You can open up this menu by pressing left on the left directional buttons (or D-Pad if you’re using a Pro Controller or Switch Lite). Party Snacks are listed above, whereas Pocket Snacks are the second option down.

Note that you can only use as many Snacks depending on how many slots you’ve unlocked, which you will unlock more as you proceed through the game.

The Snack List allows you to peruse through all of the Snacks you’ve captured. There are a total of 248 Snacks to capture, so get out there and start recruiting!

The Cooking Mama series was incredibly popular on the Nintendo DS and 3DS systems. Now, a new entry has been announced for Nintendo Switch with the subtitle ‘Cookstar’ 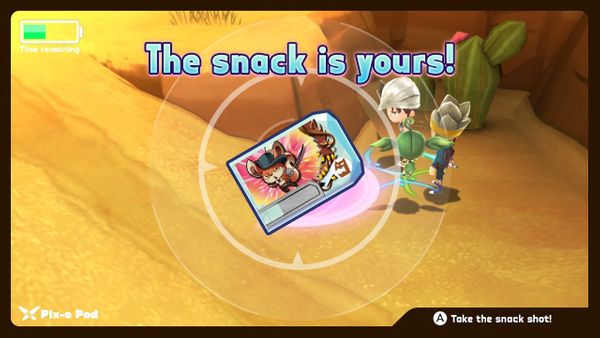