This slept-on indie gem is tucked away in an oasis of its own making, standing out from the desert of retro Indies and solidifying itself as an instant classic. Sky Racket has a name as catchy as Mega Man, a concept as engaging as Shovel Knight and so much polish that it’s not even remotely surprising that this game has been in development for half a decade.

Hovering through the air, as the playable character you selected from the get-go, you’ll find yourself head-to-head with cutesy bright yellow chicks who are bombarding you with projectiles in true bullet-hell fashion. The catch? Rather than helplessly maneuvering through this onslaught of cute carnage, you can defend yourself using your nifty little tennis racket, throwing their attacks right back at ’em for some instant karma. It’s a neat little concept expressed with finesse.

As you progress, the game takes different approaches to how it challenges you. Sometimes, you’ll be met with an army of Thwomps, ranging from sunglass-donning cool guys to emotional blues, that you have to blow up to get to the meat of the fight – the chick behind it all. Or, sometimes, you’ll find yourself amidst a heavy rainfall of raccoons that latch onto you before a classic bright red joystick pops up to indicate that you gotta shake that analog stick to get out of dodge. Toppled with interesting, quirky boss fights and a neat world system that has more variety than any Mario game barring Galaxy, and Sky Racket solidifies itself as a worthy nostalgia-tickler.

Enjoying our Sky Racket Switch review so far? Don’t forget to like us on Facebook and follow us on Twitter for more Nintendo Switch content. Also, please consider supporting us on Patreon so that we can continue to do what we love doing.

By far, Sky Racket’s most endearing aspect is its pixel art, whether that’s the protagonists who don their capes and tennis rackets, or the sandwich-cats, which are some strange hybrid of a sub and a feline, which, whilst it might sound like something hellish that could easily fit into a Doom mod, works spectacularly with the retro style. The levels themselves are utterly gorgeous, with watercolor summer vibes and unparalleled attention to detail; simply put, Sky Racket’s visuals are crisp, sharp, stunning, and rich with passion.

Whilst challenging, Sky Racket is never overtly tedious, and it’s unlikely that you’ll end up in a scenario like the Genocide Run of Undertale, or the hellish tight-knit boxes of Killer Chambers. It’s a more light-hearted romp, proven by its infectiously charming, summer-feels soundtrack that perfectly compliments the drop-dead beautiful visuals. There’s no grit, grime, or grumbling here – you won’t find yourself at the behest of a 9 Inch Nails score like in Quake, setting the tone as something more action-packed, ready to throw you right into the mud. Instead, the cheery upbeat aesthetic, toppled with the bright, vibrant color palette, serves to welcome you to this personality-rich haven of incredible designs.

Check out our Review of Infinite Beyond the Mind

Sky Racket is something you can throw on and switch off for a while to enjoy, with a melodic score that serves to ease, action-packed gameplay that’s not too challenging, so much so that it’s incredibly accessible, that reels you in for an engaging time, along with a charming personality unmatched by many of its competitors. If you’re looking for a sparkly brand new retro experience for the Switch, you’ve found it.

Thank you for checking out our Sky Racket Switch review, thank you to Double Dash Studios for providing the review code and thank you to our $5 and up Patreon Backers for their ongoing support: 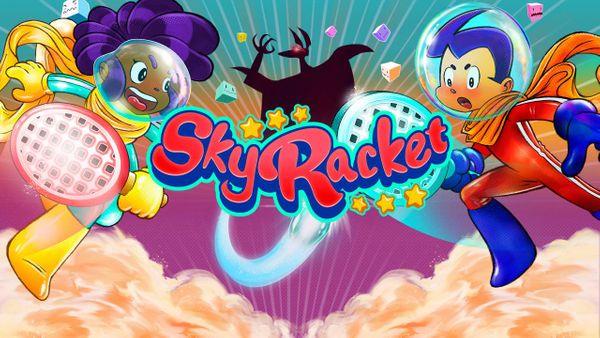