Shape of the World is a walking simulation game that has you exploring an ever-expanding forest. Activate objects around you to continue forth, uncovering each of the ten environments that the game has to offer. Shape of the World is designed to be a short experience that can be finished within a few hours. The game is certainly one to play after a hard day, but how does it stand up as a video game that intentionally lacks narrative progression and complex mechanics?

Shape of the World features some jaw-dropping and awe-inspiring moments, despite its intentional lack of narrative. The simplistic 3D art design has been a common choice from ambitious indie developers as of late (e.g. Fe), allowing smaller teams to develop grand 3D adventures without having to worry about textures and fine details. However, this art style choice often comes at the cost of the gameplay experience (especially in the case of Shape of the World), as the textureless design can often make it difficult to differentiate between areas that you can traverse and areas that you cannot. More often than not, you’ll be confused about where walls end and begin as a result of this.

That all being said, that art design certainly creates some truly picturesque moments that make you stop and appreciate the thought and effort behind it.

The Nintendo Switch version also allows for video capture at launch, which is a welcome feature for a game such as this. However, the occasional frame-rate drop can often ruin perfect moments.

With a game that features calming and relaxing environments that aims to engross you in the world and its inhabitants, it certainly requires great world design. Shape of the World delivers on this in some aspects, and completely misses the mark in others. The hook of the game is that your environments will grow from the ground as you walk up to them, encouraging exploration of what may initially seem like an open world full of nothing. In turn, this design choice has you feeling as though the world is growing alongside you. When considering verticality, there are many high points that allow you to spot your objective out in the distance, whilst allowing you to sit back and appreciate the wonders of your surroundings. However when you are not able to access higher ground in these beautiful environments, you may often be scratching your head thinking: “What the heck do I have to do now?”, providing an entirely new emotion that we can only describe as being frustratingly calming.

Whilst some games can open with a slow start by barraging you with seemingly endless tutorials, Shape of the World jumps straight into the action (or lack thereof) from the get go. The primary gameplay mechanic has you traversing the world and interacting with glowing objects in order to advance. Jumping feels odd and disorientating, often leaving you confused as to where you’re going to land (as well as slightly nauseated). Enemies are scarcely scattered throughout the world, but they don’t add any kind of challenge, rather they can just act as annoying hindrances.This can often seem repetitive and tedious, as there is not much else to do than that. Your only form of attack is to throw your seed projectiles at enemies, which can feel awkward considering there is no cursor or lock-on functionality. The projectiles also allow for you to plant trees, so that you can disintegrate them in order to dash (we’re not sure why that happens, it just does). You can collect upgrades to your seed-laying ability, giving you bigger trees to plant and providing more damage when thrown at your enemies. They’re also a collectible that encourages exploration and completion. The gameplay itself lacks depth, however the theme of the game never promised anything more than what it delivers on, so we cannot fault it for that.

Shape of the World features beautiful mood setting music that is used in order to enhance the visual spectacle. The tracks rarely feature distinct melodies as they are there to simply add to the game’s ambiance. However as beautiful as the music is, don’t expect much variety until you reach chapters 8 and onward. That being said, those tracks are appropriately tense leading up to the climax of the game.

Shape of the World is certainly not a game that I would think to buy as I simply parused through the eShop. But after playing through it, I am pleasantly surprised by its presentation, despite its noticeable drawbacks. Its gameplay is nothing to boast about, but its calming art design provides an experience that is certainly worth your time.

Thank you for reading our review on Shape of the World. Will you be putting the money down for this one? Let us know in the comment section below. On the E3 2018 website, Konami has is set to announce two games for the Nintendo Switch in just a few short days. One game is said to be an 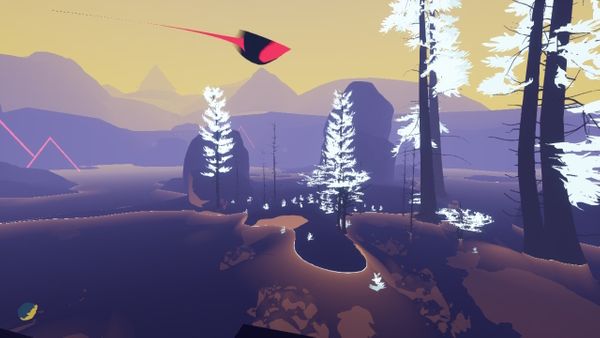 Shape of the World is a walking simulation game that has you exploring an ever-expanding forest. Activate objects around you to continue forth, uncovering each of the ten environments that