You are the president of the United States and quite frankly, it couldn’t have happened at a worse possible time. Just before giving a speech to the public, an alien race invades Earth and whilst attempting to fight back, you are captured and placed inside a simulation world where anything goes. Switch between this artificial world where anything goes and the real world (or what remains of it) to put an end to the alien’s tyrannical rule.

Saints Row IV‘s simulated world allows for a well of bizarre opportunities that would seem out of place in your standard open world sandbox crimefree shooter. Being able to save a car and access it later by going into the hub menu to rematerialise it is now possible because science. It’s like playing Grand Theft Auto with all cheats on, all of the time.

Speaking of bizarre, the most fun is when in the game’s simulation as it often breaks the concept of plausible reality. This is also accentuated by the superpowers that you unlock throughout the game’s primary quests; these allow you to do crazy things like sprint really quickly, jump outrageously high and far, shoot elemental blasts, use telekinesis and more. It does well to turn the game from a Grand Theft Auto knockoff into its own brand.

The ragdoll physics are both a blessing and a curse as they make the game more comical and allows for more variety when either using your superpowers or driving, but they can often grow to be tiresome and frustrating during certain boss battles. I also found for the game to glitch every now and then as a result of this, like jumping on a ledge and getting stuck or a car falling halfway through the ground.

The game runs generally smooth on Switch, however there were odd occasions of frame rate dips, especially in wacky side missions where you find yourself causing as much chaos as possible and the game is tasked with rendering as much as possible can keep up with. Surprisingly, Saints Row IV held up quite well in handheld mode and it didn’t stutter or struggle more so undocked.

Enjoying our Saints Row IV Switch review so far? Don’t forget to like us on Facebook and follow us on Twitter for more Nintendo Switch content. Also, please consider supporting us on Patreon so that we can continue to do what we love doing.

Lastly for the Nintendo Switch version, when in combat, you can aim using the gyro controls, which is a godsend for a player such as myself who switches between playing hyper-realistic shooters and Splatoon 2.

The first hour of the game is strictly linear, which is to say that the game focusses on providing the story context until it throws you into its sandbox simulation. As soon as you get through its initial linearity and the scene has been set, you have an entirely free world to explore without any restrictions or invisible walls. There’s nothing stopping you from driving from one side of the map to the other, doing side missions in any order that you see fit. As you progress through primary missions, you will go in and out of this open world simulation to take on more linear ones but at the end, you will go back to the virtual world. Side missions are often easy to activate and sometimes, in the case of Flashpoints, you don’t even need to get out of your car; simply drive through the mission indicator and take out all of the enemy aliens in said location.

As in true Saints Row fashion, the fourth instalment takes a very tongue-in-cheek satirical approach. Why, within the first 15 minutes of the game, you are climbing up an atomic bomb that has been shot in the air, attempting to disarm it to the passion of Aerosmith’s I Don’t Wanna Miss a Thing, only to fall back down to Earth and literally land in the White House’s presidential chair.

The fourth instalment’s concept is fascinating, giving context to the abnormality that the series is known for. It also sets the world up for some truly intense moments, with it all being delivered with a sly comment and an intensional over-the-shoulder wink.

Saints Row IV initially released in 2013, during that weird time period where games released for both PS3/Xbox 360 and PS4/Xbox One. The game shows its age, and that’s not to fault the Switch’s hardware. However, Saints Row simultaneously takes on a realistic yet somewhat animated approach, which helps to keep it redeemable.

Keeping in tandem with its satirical nature, the character creation goes so over the top in detail that it comes across as borderline ludicrous. I got halfway through deciding the girth of my male “sex appeal” organ where I thought, ‘okay, let’s just get on with the game’… that is what I thought whilst continuing to have fun customising and laughing at every option.

As soon as you enter the simulation, the world plays tricks on you to remind you that nothing is real. Whether it be seeing a pedestrian glitch or jumping into data filled water, your world’s surroundings brings your mind back to the severity of the situation without taking itself too seriously.

As it does so with the gameplay, the graphics are also competent in handheld mode and it doesn’t take any kind of significant downgrade. I generally find more realistic action games to be bogged down in handheld mode but as the Saints Row franchise tends to slightly differentiate itself from this norm, it seems to be a perfect fit on Switch.

The majority of the game has you choosing from radio stations that each stick to a specific genre or style. You don’t have to be in a car to be playing music, which means you can do anything from taking a leisurely stroll through the park to some hardcore rap to blowing up the town using a rocket launcher to some calming classical music. Me? I opted for 89GenX’s upbeat indie rock station… we all have our preferences. The downside to this is that it can sometimes play over the top of important dialogue.

The voice acting is top notch, and that’s no surprise as developer Volition spared no expense in hiring many A-List actors, such as Terry Crews, Burt Reynolds and Keith David. Now I’m not one who gets all jaw-dropped over celebrities, but they are certainly some impressive additions.

Click here to read our review of Dead or School

We may not have a Grand Theft Auto title on Nintendo Switch but with its wacky, nonsensical approach, Saints Row IV: Re-Elected may well be the next best thing. It runs impressively well on Switch and its surprisingly comical theme under an M rated umbrella gives it its own unique flavour. Top all of that off with its superpower abilities and fighting off hordes of aliens in a simulated world and it comes together to make for a damn good time.

Thank you for checking out our Saints Row IV Switch review, thank you Koch Media for providing us the review code and thank you to our $5 and up Patreon Backer for their ongoing support: 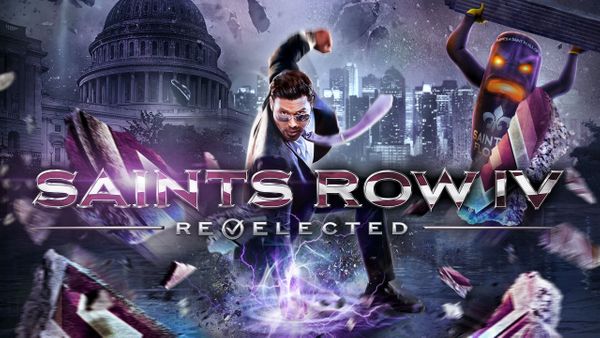 You are the president of the United States and quite frankly, it couldn’t have happened at a worse possible time. Just before giving a speech to the public,