As a wired and controllable sociopath, you’re on a rampage to take down the underbelly of a cruel virtual reality corporation known as HEAVEN and rescue your kidnapped brother. In RUINER, Let bullets fly, kill without mercy and work alongside your hacker friend to let nothing stand in your way.

RUINER is your typical twin-stick shooter from an isometric viewpoint. You have a variety of weapons that your enemies will drop and various abilities that you can learn as you go and switch between. These weapons are predominantly various types of guns, but you can revert to the occasional melee weapons that deal more damage but should only be used as a last resort. The abilities are what you truly want to be considerate of as these can range from energy shields, to upgrading your dash ability, to being able to manually slow down time. You can upgrade these abilities as you collect more Karma and level up, with a standard skill tree that you would expect from most run ‘n gun shooters.

Aside from the slow motion ability, there is also a default slow-motion feature in RUINER that is arguably the most controversially divisive aspect of the game. As the game has previously released on Steam, PS4 and Xbox One, I wanted to see if there was a way to adjust the slow-motion in order to get a better understanding of what worked for me but alas, this is not the case. In a nutshell, the slow-motion appears to activate at random for approximately 3-5 seconds. This can add to the strategy, especially if you are playing on hard mode, but it can also disturb the rhythm of the game. Some praised it and some vehemently criticised it. From my personal perspective, I have to agree more so with the latter as I found the slow-motion difficult to predict and would randomly occur often when I didn’t want it to. It certainly disrupted the gameplay flow which felt smooth and responsive in spite of it.

Above all else, RUINER is quite possibly the most fun I’ve had with a twin-stick shooter in a long time. It’s more mature themes and clean-cut Unreal engine design gives it an energy that isn’t seen as often considering that most recent entries tend to opt for a 16-bit pixel art style. RUINER has some challenging and badass boss fights that will surely challenge your skills and you will feel very accomplished upon defeating them.

Enjoying our RUINER Switch review so far? Don’t forget to like us on Facebook and follow us on Twitter for more Nintendo Switch content. Also, please consider supporting us on Patreon so that we can continue to do what we love doing.

For the Switch version, the gameplay runs as smooth as butter, without a single frame rate dip to be noticed. It seems as though Reikon Games put a in a lot of effort to ensure that this port was done so with the justice it deserved.

Each level in RUINER is strictly linear, with the game putting more emphasis on the high octane action and plot progression. Each room offers a generous amount of cover when required and when they don’t, you are required to rely on your learned abilities, cunning and brute strength.

The hub world between levels that is Rengkok is a vibrant and dirty city to explore to your heart’s content. Taking in the city and its dreary nightlife provides an in-depth look into the Rengkok’s personality, providing world building without forcing it down the player’s throat. There are side missions to accept in between main levels which simply provide small world building details, but these are primarily inconsequential and are there for Karma bonuses.

With your cyborg mind being hacked, you begin at the mercy of your captor’s will. Once you break free from this stronghold, the search for your kidnapped brother begins. The majority of the game’s plot is based around this, attempting to find his location and doing whatever’s necessary in order to get to him, but you’ll quickly learn more about HEAVEN’s operations and why this goes deeper than simply saving your brother.

There are some fantastic twists to the plot, with some fascinating (and often disturbing) characterisation. RUINER is certainly not a game for those who have a weak stomach or are prone to be morally conflicted; you have been warned.

RUINER‘s art style is surprisingly crisp that appears to run well on Switch. The cutscenes, despite their occasional frame rate dips, are beautiful, displaying a neo post-apocalyptic setting with a red overtone and subtle cel-shaded techniques. Some of these cutscenes actually resemble PS1/PS2 style aesthetics whilst still maintaining a high fidelity, which provided a comforting nostalgic touch. Most, if not all, levels take place in various depictions of factories and laboratories, with a rustic metal theme.

During combat levels, the music omits a heavy industrial feeling that plays in well with the game’s aesthetic. It does a fantastic job at laying down a consistent quarter note beat, allowing the player a sense of rhythm to the action madness that is RUINER’s gameplay. In the overworld city of Rengkok, the themes take on a more eastern influence, with a blend of boisterous vocals that lay an innovative yet somewhat unsettling feeling.

RUINER has a lot to be praised for, but I just couldn’t help feeling that it could have been so much more if a few aspects were tweaked; the unpredictable slow motion and strictly linear level design, to name a few. The game runs impressively well on Switch and all of its finer details are here uncompromised, so you’re certainly in for a top notch experience if you decide to play it on the hybrid console.

Thank you for checking out our RUINER switch review, thank you to Power Up PR for providing the review code and thank you to our $5 and up Patreon Backers for their ongoing support:

Ultracore, a run ‘n gun shooter developed by Psygnosis for the Amiga, Sega Genesis and Sega Genesis CD, was cancelled prior to its completion back in 1994 and now, 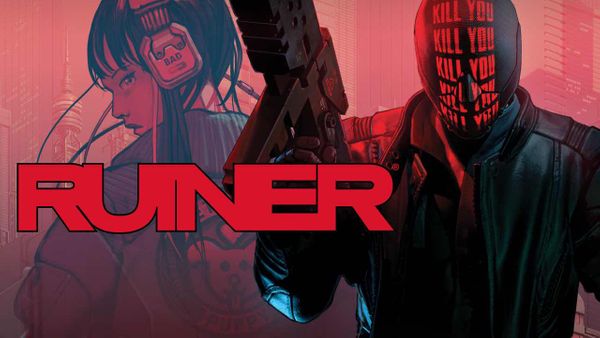 As a wired and controllable sociopath, you’re on a rampage to take down the underbelly of a cruel virtual reality corporation known as HEAVEN and rescue your kidnapped