The sixth and final boss guide for Retro City Girls is for Sabuko, the daughter of Yakuza boss, Sabu. Let’s take her down and end this by beginning with…

Sabuko’s combat can be tricky to predict, but there are certainly some tell-tale signs. First, you don’t want to be near here for too long as she will jump in the air and slash at you from above. Get close to her in short bursts, so basically: Float like a butterfly and sting like a bee.

Another thing you can do is in the split second that Sabuko is jumping, you can hit her to bring her back down to ground or use a Spin Kick, but it’s a risky move.

Personally, I found that the Spin Kick attack worked well for this boss as Sabuko can be quick and it helps you to get out of a jam.

Also, Sabuko is very good at blocking when doing chain quick attacks. You’d be better off doing single power attacks that deal slightly more damage and prevent her from blocking and countering as much.

Continue this process until you get to…

When Phase 2 begins, Sabuko will jump up out of harms way and send two henchmen to do her dirty work. Don’t stress too much about taking these guys out; simply avoid taking damage, do what you can and try to focus on dodging Sabuko’s attack when she jumps back down – you’ll notice this happening by the moving shadow on the floor.

When Sabuko jumps and clings onto the wall, she’ll kick off and strike like a spear into the middle, so attempt to move onto either far side of the floor.

Sabuko has a mirror image move that will create copies of herself. Only one Sabuko is the real one and you can tell which one is real by the lack of aura around them. Go up to that one and start attacking, putting that little show to rest.

Rinse and repeat until…

Two more cronies will kick of this phase once again. Do the same as what we had done for Phase 2.

The only notable difference about Phase 3 is that Sabuko will send out little balls of water. Try to keep a safe distance between you and her and approach until after the blue beams of light have finished appearing.

Once you’ve whittled down her health again, we’re done… or we would be if it wasn’t 4…

Crazy, right? Not really. This extra phase will begin the same way, with two more cronies.

Sabuko’s new move will have an orange beam of light that will charge up and disperse a ring of fire (cue Johnny Cash). Stand away from Sabuko as she’s charging up and jump over the flames.

Sabuko will also send out some thunder tornadoes whilst spurting out more water. Do your best with the water and flames but with the tornadoes, run into a corner to draw their attentions. Then, proceed to the next corner either above or below so that you’re creating a wide arch and is far away as possible from Sabuko. With this gap, you’ll have a greater opportunity to approach her and start attacking.

Sabuko will also send out single spark balls at you and will perform the stance shown below before doing so. These just shoot out horizontally so when you notice her doing this, move up or downwards (double-tap to make it a sure thing) and you’ll avoid it easily enough.

And that’s all there is to it! With this, you’ll have defeated Sabuko and finished the game – Enjoy the final cutscenes! Nintendo is known for their wacky left-field ideas, but this one takes the cake! Just recently, the Big N posted a video about a circular device that has you strapping 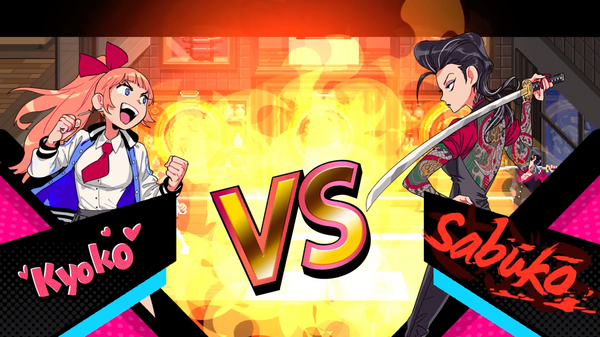 The sixth and final boss guide for Retro City Girls is for Sabuko, the daughter of Yakuza boss, Sabu. Let’s take her down and end this by beginning