Retro City Rampage DX is an 8-Bit inspired, quirky, top down action game that is very reminiscent of the original Grand Theft Auto games. After you are sent back in time, you must gather the seven items to restore the Flux Combobulator of Doc Choc’s time machine. The game has a tonne of self-referential humor and parodies from not only the 80s and 90s pop culture, but also pokes fun at modern video game practices.

Retro City Rampage DX runs very smoothly and brings a lot of new twists to an old formula. In missions and shootouts, the game lets you jump over oncoming bullets and stomp on enemies. At times, this actually feels more effective than shooting.

Driving around the city is challenging but never unfair. The game encourages you to mow down civilians in your vehicle for money, which is satisfying in a way that I should consult my therapist about.

Retro City Rampage DX is not shy about referencing its influences as the game is filled with funny 80s and 90s references around every corner.

So, if you’re an 80s/90s kid or simply just love those eras, this game will surely resonate with you. And even if those jokes don’t resonate with you, there are still plenty of modern gaming parody jokes to enjoy as well.

Despite the main story only lasting for approximately five hours, there is plenty to explore and collect in a crisp 8-bit style world.

Once you finish the main quest, you unlock Turbo mode for some awesome Retro City Rampage mayhem!

While the game controls smoothly, the shootouts can often feel awkward and unintuitive. Dialogue at the top of the screen can get in the way of oncoming hazards during battles and shootouts which can result in deaths at no fault to the player.

Running on foot feels very slow which does encourage you to steal a vehicle, but there are some dungeons and mazes that must be taken on foot, making the experience frustrating. Sprites can also be too small at times, making it difficult to distinguish enemies and objects in handheld mode.

Just like Grand Theft Auto games, your police threat level increases the more mayhem you cause. However, the police rarely offer any kind of challenge if you just simply keep driving to your next destination.

Often missions simply involve driving from point A to point B, however the game does point this out in a funny self-referential manner.

Whilst the story and dialogue is full of fun and wit, it has the tendency to overstay its welcome. Also, the overarching plot, while quite witty with its many 80s references, does lack any real meaning. It’s definitely a story to not be taken seriously.

Side quests also lack any sort of originality as they generally involve you hunting down collectibles.

Lastly, there is one section near the end that is incredibly frustrating. If you play the game, you’ll know it when you play it.

Retro City Rampage DX is a nice little trip down nostalgia lane and will certainly make you chuckle from time to time.

It certainly is not shy when paying homage to its inspirations and steers heavily into its themes.

Whilst the game is a fun little experience, it does fall short when it matters and fails to create anything memorable in terms of gameplay.

Nintendo always like to drip-feed new Splatoon 2 information, and today is no exception. Nintendo of Europe has shown off a new level in the Octo Expansion call Stamped-Up Station, 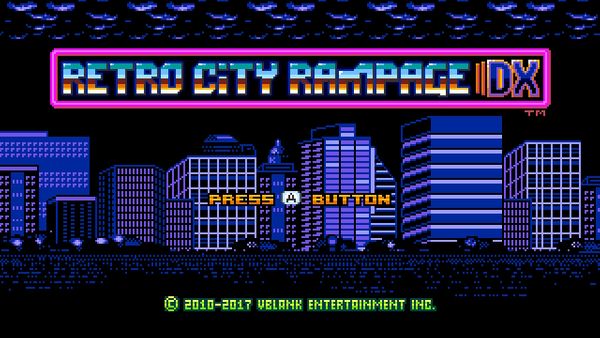 Retro City Rampage DX is an 8-Bit inspired, quirky, top down action game that is very reminiscent of the original Grand Theft Auto games. After you are sent back in