Raining Blobs is an anime-style Tetris/Puyo-Puyo arcade game about matching colours with raining blobs. Each colour set requires at least two star blobs to be complete, requiring you to think ahead and plan out your moves to avoid running out of time… or space.

If you love falling blocks arcade puzzle games, you’ll instantly gravitate towards Raining Blobs. The gameplay is straightforward on the surface, but its variety of modes and star-based gameplay allows it that extra dose of uniqueness that these games are always in need of.

The game has four modes: Arcade, Tournament, Endless and Puzzle. This variety helps the gameplay to feel fresh, despite the lack of features. Arcade is the standard mode as expected; a free-play mode that lets you play single-player or with up to eight players local co-op or up to 16 CPUs. Obviously the more players, the more hectic the gameplay becomes, but that can be half the fun.
Tournament Mode has you take on eight challengers, each with progressing difficulty. They start off very easy and get SUPER difficult towards the end. I can’t say that I’m an arcade wizard, but I like to think I do quite well at Tetris 99, usually finishing in the top 20, and I found this to be very difficult. Luckily, you can pick a level of difficulty, so that’s definitely something to be considered before starting a round of Tournament Mode.
Endless Mode is as the game suggests – Endless. After playing through the Tournaments, playing alongside friends and trying out all of the other modes, I felt blobbed out and didn’t feel the need for endless blobbing, but each to their own in that respect.
Puzzle Mode is quite creative and is often the mode my friends and I went back to the most. Here, you are presented with quickfire blob placements and you need to solve the puzzle with just the one block you’re given. Many of them were quite the noodle-scratcher and was certainly creative. can see each other’s answer to solutions as they aren’t randomly generated.

For colourblind players such as myself, colour-matching puzzle games can be make or break. Everyone’s colourblindness differs and I was struggling to differentiate between the green and yellow blobs. So when this happens, I always check the settings and I was relieved to see that Raining Blobs has a colourblind Mode that helped me out tremendously. This allows for a much wider audience to enjoy Raining Blobs and could have completely ruined the experience for me if it didn’t contain it. Kudos Endi Milojkoski!

Raining Blobs has an achievement system that encourages completionists to try new things and lengthens out the game’s replayability. That being said, the achievements are there without much further purpose as the Switch doesn’t have any form of achievement/trophy system.

Enjoying our Raining Blobs Switch review so far? Don’t forget to like us on Facebook and follow us on Twitter for more Nintendo Switch content. Also, please consider supporting us on Patreon so that we can continue to do what we love doing.

There is absolutely no HD Rumble or rumble of any kind, which is a major disappointment. Rumble provides tactical feedback and makes gameplay feel empty and hollow. It’s satisfying when you match up colours and perform impressive combos but rumble of any kind can heighten the senses tenfold.

Tournament Mode is the most story you’re ever going to see throughout this game and it simply takes the form of one line dialogue from your opponent and your character with a cheesy one-liner. Many of them made me chuckle and a lot of them were quite poorly written, however I’m not sure whether this was intentional as a tongue-in-cheek reference to poorly translated puzzle games during the NES/SNES era… I choose to believe so.

Raining Blobs is a colourful game that is easy on the eyes. It may come across as generic, but the colours are vibrant and the blobs and indicators are easily distinguishable. The anime girl characters in the background of each player’s view is slightly off-putting and odd, but that, I suppose, comes down to personal preference. These can also be turned off in the Options menu, which is good to know.

The game’s soundtrack is bubbly and lighthearted, a perfect fit for its bright and happy-go-lucky. However during certain moments, especially in Puzzle Mode, there are some sudden shifts in music tracks that feel awkward and disjointed, disrupting the general flow of the player’s concentration. The tracks can also be incredibly repetitive, but it certainly is catchy, so don’t be surprised if you’re walking around humming and bopping around the place… I was.

Raining Blobs is a very competent colour-matching puzzle game with a wide variety of modes to keep you going, but the generic anime approach comes across as pointless and uninspired. It’ll come down to personal preference and don’t get me wrong, I love watching Japanese anime in my spare time, but the waifu characters seem alarmingly out of place.

Thank you for checking out our Raining Blobs Switch review and thank you to our $5 and up Patreon Backers for their ongoing support: Remember how we’ve been going on about how well the Nintendo Switch has been selling? Well, it’s gotten even better! In the US over Thanksgiving week 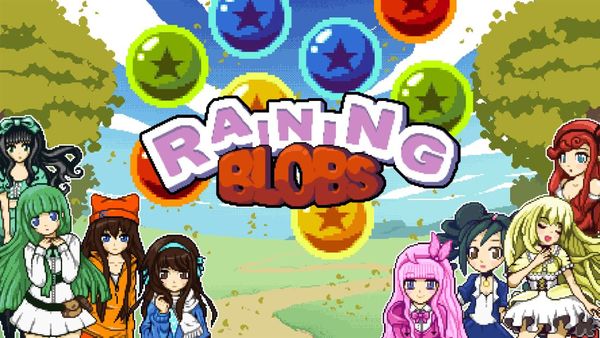 Raining Blobs is an anime-style Tetris/Puyo-Puyo arcade game about matching colours with raining blobs. Each colour set requires at least two star blobs to be complete, requiring you to