Sometimes, these co-op levels in Pikuniku can be confusing. So we’ve put together a two-part guide on all nine levels. Here we go…

If you’re the red guy, make your way up and move the acorn down.

Manoeuvre the acorn onto the button.

Now the bottom one can move past the door and kick the ball onto the button.

Make your way through the maze…

Kick the ball to the right…

Have that ball on the left button and have one of you stand on the other whilst the other makes their way up (like shown in the image below).

Kick the ball down at the top and manoeuvre it onto the other button that the other player has been standing on.

In the next section, have one stand on the other. The bottom one needs to jump and then whilst in midair, the one on top jumps and uses the zipline to get up.

When one gets to the top, push the box down so that the other can make their way up.

The next part requires you to kick the three boxes as hearts.

And then we have the boat!

Level 7 is another car race, so there isn’t too much to it. Just jump into a car and race.

After the finish line, jump into the water and hold down A to sink and let go to float back up the other side.

You will both need to be pressing a button at the same time, so one of you jump on the other’s head to get to the left one.

And the other move over to the right until the barrels fall.

This will allow you to use the barrels as platforms so that you can jump over the wall (whilst your partner leaves you behind… hmph).

In the first room, go up the third water fountain and push down the big ball.

Push it all the way over to the right so that you can both use it to jump over the wall.

Be like weird conjoined monkeys with the grappling rings…

(if you head down and slightly to the left, there’s a Trophy there waiting for you)

Proceed to the right and kick the button to rotate the L-shaped platforms so that you can make your way up.

Kick the plank down…

And jump onto the clouds.

Ride the cloud that goes to the right so that you can jump off and land on the other side (if you don’t, you can still get up, but it’s just a little frustrating).

Make your way up this section and get this big ball down.

Manoeuvre it onto the button and continue onwards.

Now you just need to get a pumpkin and place it onto the button below.

use the zipline to get across…

Get this other pumpkin on the next button.

Swing your way across…

First, the top player needs to flick the switch, lowering the platform for the red player.

Now the bottom player can flick their switch so that the top player can make their way through the rotating square.

Once the top player gets through, they need to kick the next switch so that the red player can proceed through.

Use the matchsticks sticking out on the right wall to bounce your way up.

When you get to the top, flick the switch and then kick the buttons at the same time.

When the balls fall to the bottom, manoeuvre them through the square so that they fall through below.

And then put each ball on the buttons.

When you move on, head to the section shown in the image below. One player needs to jump onto the other’s head. The bottom player then needs to jump and in midair, the top player jumps off and up to the platform above.

You’ll want to jump into the tree, onto the diamond to the left and then towards the two balls hanging on the other diamond. In midair, kick the balls so that they fall down (this may need to take a few attempts).

Once they’ve fallen down, manoeuvre them so that they stack and you can use them to both jump up to the platform above.

Here, both kick the buttons at the same time.

Before you head through, make sure you get the other balls down on the other diamond (you don’t have to get them, though). However, you will need to get the three balls that are in the hidden area shown below.

Manoeuvre the balls over to the five buttons and place them on there.

You can also use the big ball in the secret area pictured below and if you only need one more ball on a button, one player can stand on it whilst the other flicks the switch so that the pumpkin falls out of the square above.

In the next room, you will need to get the two big tethered balls over to the next section. This part is quite tricky, but it basically just requires persistence and force. Don’t try to be elegant, just push and kick them through.

Move them to the far right, jump on them and jump up to the matchsticks.

Up there is the boat and congratulations, you’ve completed the co-op levels 🙂

And here are some more walkthroughs and guides if needed:

Pikuniku Guide: The Golden Tooth from the Silver Frog Inside every completionist is the will to collect everything, however great or small. So we’ve put together a guide of every Trophy you can find in Pikuniku. 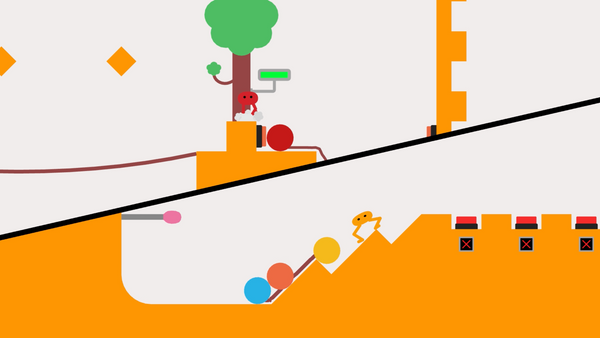 Sometimes, these co-op levels in Pikuniku can be confusing. So we’ve put together a two-part guide on all nine levels. Here we go… Co-op Level #6 If