In the boss fight against Mitch the Butcher, there are two stages, so let’s get started…

If you believe that we have missed anything or could improve on our guide, let us know by emailing us at team@switchaboo.com.﻿

First, be careful of Mitch the Butcher ramming you with his creepy van. If he hits you, it’ll cause some damage but at the same time, a bike rider will attempt to box you in from the front. So, your best bet is to slow down time and move either up or down out of harm’s way.

The next attack that Mitch the Butcher will dish out at you one bomb after another. To avoid the explosions hitting the ground, slow down time, horizontally line up with each bomb and shoot them before they hit the ground.

Finally when Mitch the Butcher stick his head out to fire at you, get in line with him and shoot him back.

Repeat the process and down will go Mitch the Butcher. So here we are, the final boss of My Friend Pedro just happens to be Pedro himself. This boss fight seems to be set up more like a SHMUP, but 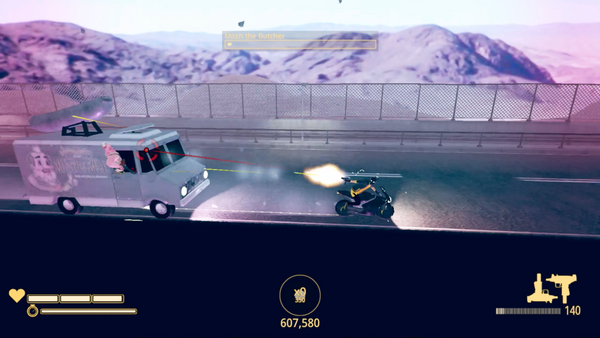 In the boss fight against Mitch the Butcher, there are two stages, so let’s get started… If you believe that we have missed anything or could improve