Must Dash Amigos is a topdown racer akin to Mario Kart and the like, collecting items and having no mercy against your opponents. Complete challenges, take place in tourneys and duke it out in battle mode, all in a Mexican inspired world.

For the most part, Must Dash Amigos is simple to control; run with the left analogue stick, pickup items from piñatas, press A to use them or B to drop them. It’s a minimalistic control scheme that works well with single Joy-Con play, making it a perfect fit on the Nintendo Switch.

Share a Joy-Con off and take place in up to 18 tournaments, each with a variety of races and battle modes. I found it strange that tournaments are only available in multiplayer mode with the apparently must-have inclusion of battle maps. Secondly, there are no AI racers, which extremely limits the game’s replayability.

Must Dash Amigos is best played with friends, but the game can be played in a single-player mode. However, the single-player mode only consists of Challenges and Time Trials, the former consisting of three different modes: Double Trouble, Danger Dodging and Master Catcher. Each of these three modes have their fair share of problems in addition to the absurdly hard difficulty from the very beginning.

Double Trouble has one player controlling two runners simultaneously, one with the left analogue stick and the other with the right. Firstly, this mode is so incredibly difficult as your time limit to finish the lap in time is absurdly minimal. Secondly, there is no ramp up of difficulty as it starts high and maintains that level throughout.
Danger Dodging is another absurdly difficult mode, but you’re only controlling one character this time. Run as fast as you can, utilising all of the items that you pick up to gain distance between you and the rushing stampede that lurks behind you.
Master Catchers consists of the player chasing a piñata before the clock hits zero. Out of all of the modes, this one would have to be my favourite as you have the full minute and a half to succeed and you there are no instant fails.

All of these modes are fundamentally unenjoyable as the controls feel floaty and unintuitive. They are also very barebones in content and after only twelve levels in total across four worlds in single-player mode (and time trials), that side of the game is done.

For a racing game that places a lot of its focus on multiplayer, the exclusion of any online activity is a substantial omission. With its lack of single-player content, most of the game can only be played with others around you and when that’s not an option, an online mode would have added much more value.

Due to the camera zoomed out, we found it particularly difficult to make out which items we picked up at any given time. Contrary to general standard practise in party racers, there was no box or indicator to say what we had picked up, so we often had to lean in just to see what we were about to use and in the end (unless it was a bomb that would blow us up), just used the items without thought or strategy.

Enjoying our Must Dash Amigos Switch review so far? Don’t forget to like us on Facebook and follow us on Twitter for more Nintendo Switch content. Also, please consider supporting us on Patreon so that we can continue to do what we love doing.

Must Dash Amigos has a healthy amount of HD Rumble when activating items. For a game such as this with quick action and fast movement, the tactile feedback is essential and well implemented.

Each race map is incredibly linear and mainly consists of twists and turns. There are some minor shortcuts that allow you to cut corners, but there are some modes (Danger Dodging, for example) that will take you out even while you’re performing that said shortcut, despite them not going through it themselves. The shortcuts are also limited in scope as all multiplayer modes consist of a player being eliminated if they fall out of screen, greatly shortchanging creativity.

The Battle Mode maps certainly contain some variety, pitting the players in close proximity to one another and containing various hazards, pitfalls and the like. These modes are arguably the most enjoyable part of the game as there’s a certain sense of satisfaction when you land a burrito shot from one side of the map to the next. The floaty controls and wide arching turns of the characters can cause some sections to be somewhat unintuitive, but the fun is there, regardless.

Must Dash Amigos has no story whatsoever. This isn’t necessarily a bad thing; Mario Kart doesn’t have a story and that franchise still sells gangbusters. However, the difference here is that Must Dash Amigos’ gameplay feels lacklustre and unoriginal, resulting in a barebones experience that could have been bolstered by a plot (regardless of how big or small that may have been).

Must Dash Amigos’ stereotypical Mexican theme comes across as generic and bland, lacking creativity and polish. It simply feels like the developers had to go with something, so they ineloquently slapped on a cliche Mexican aesthetic at the last minute.

There are four character models to choose from, with each facial animation being scary and unnatural. The more that you play through the game, the more gold moustaches you receive, allowing you to choose from different costumes. Whilst these don’t provide any statistical bonuses, the variety is welcomed considering there are only four characters to choose from.

As mentioned in the graphics segment, the music is also very stereotypical, to the point where it voids any sense of personality. The character voices are cute, but they lack variety, getting old and repetitive really quickly.

I didn’t expect much going into Must Dash Amigos, but even then I came out disappointed. The game has the groundwork of a fun time, but with its lack of originality, poor controls and bareboned content, it’s just $18(USD) and a few hours that could be better spent elsewhere.

Thank you for checking out our Must Dash Amigos Switch review and thank you to our $5 and up Patreon Backers for their ongoing support: Slay the Spire is a turn-based roguelike with card game elements. Build the best deck that you can put together and fight your way up an ever-changing Spire that provides 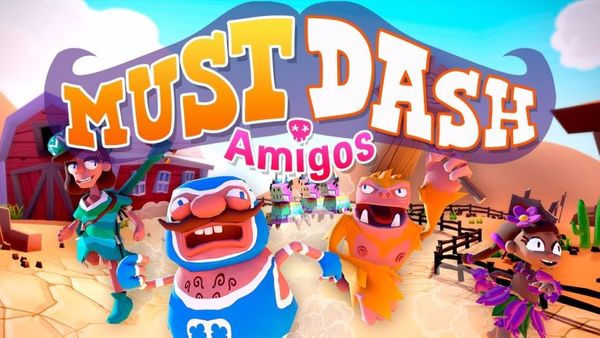 Must Dash Amigos is a topdown racer akin to Mario Kart and the like, collecting items and having no mercy against your opponents. Complete challenges, take place in tourneys and