Lord Xaros is the final boss of Monster Boy and the Cursed Kingdom and you better bring your A Game. Although once you know his attack patterns, the fight isn’t particularly difficult.

Phase 1 is pretty simple. Lord Xaros will send some orbs your way and your job is to hit them back as the monster depicted on the orb. The order also remains the same, so it goes: snake, frog, lion, dragon, human.

If you don’t hit them all successfully (like I didn’t), Lord Xaros will send them at you again but in a zig-zag like motion. So this is your second chance to transform into the character(s) that you missed and try again.

If you still didn’t get them all (like I did), he will spin the orbs around him really quickly. Don’t try to hit them as you’ll only take damage! They’ll slow down and then you can attack them.

This screenshot doesn’t really do it justice, does it? Just imagine them all spinning really fast!

Once you’ve hit them all correctly, you’ll move on to…

A short cutscene will occur with you getting trapped inside of a cage and it’ll slowly drain your health. Don’t worry though, help is on the way! Your family (and the flying puffball) will distract Lord Xaros as you wail on the cage and set yourself free. You’ll be fully healed now and ready for what’s up ahead!

For the second phase, transform into the dragon and take to the skies (or the air slightly above ground) before flames engulf you. This section is yet another side-scrolling SHMUP, so I don’t really need to explain it. I think it goes without saying but… don’t get hit!

Keep going until you get up to this part…

You actually have more time here than you’d think, so don’t rush going through it. Just try to conserve as much health as possible and repeatedly whack him with your shiny new sword when you get there.

Now Lord Xaros has turned into a bouncing eye ball.

Transform into the lion and dash into the ball just as its free of spikes. The ball will get faster and faster, like they always do, so just be cautious.

In this phase, Lord Xaros will split into four. Three of them will throw magic balls at you, each one going after the other.

Transform into the frog and use your tongue to whip the flame of whichever did not throw a magic ball at you.

When they’re groggy, swing your sword at the flame until they go back for round 2. The second time, three of them will throw their balls of magic at you at the same time. So again, whip the one that didn’t and swing at the flame.

For the third and final round of phase 4, one will pretend to throw a magic ball first whilst another one will actually throw it. Just be vigilant. If you see one about to do it, that just rules them out and it narrows it down to three. But after three balls of magic come your way, the only one that didn’t throw one is your target. Rinse, repeat and on to…

For the fifth phase, you’re going to be like a hamster in a wheel. Transform into the snake and you’ll be able to make your way around the entire thing thanks to the moss.

First, he’ll send three magic balls at you. Make sure that you keep moving and you want to be at either the top-left or top-right areas in order to spit some venom at his stupid face. However, don’t shoot more than four or five, because at that point he’ll be throwing magic balls at you again (just my recommendation).

After you’ve done a little bit of damage, he’ll rapid fire them at you. Just keep moving and dashing to gain some extra speed. Try to end up in the top-left or top-right areas so that you can spit venom again.

For round 3 of phase 5, he’ll shoot a beam Kamehameha style. Go the opposite way that the wheel is turning and use your dashes as much as you can.

When he stops and you get a window of opportunity, spit that venom at him.

In the fourth and final round of phase 5, Lord Xaros will be showing off to his friends by shooting balls to both sides. Not only that, but the wheel will suddenly change the way that it’s rotating a few times, so don’t try to dash too much, but you still have to dash.

Look at him, his arms are even crossed! He’s not even taking this seriously!

For the sixth and final stage, transform into the human. Lord Xaros will send down a force of wind at you and push you to the opposite side of him. He’ll then call down five bolts of lightning, being which the second and fourth will move back and forth.

Do your best to dash through them and when you get to Lord Xaros, wail on him with your sword. Keep doing this until he’s dead and that’s it! You’ve finished Monster Boy and the Cursed Kingdom… congratulations! If you’ve been following our walkthrough up until now, you would have just gone through the gate to The Dark Realm and you would be here… In 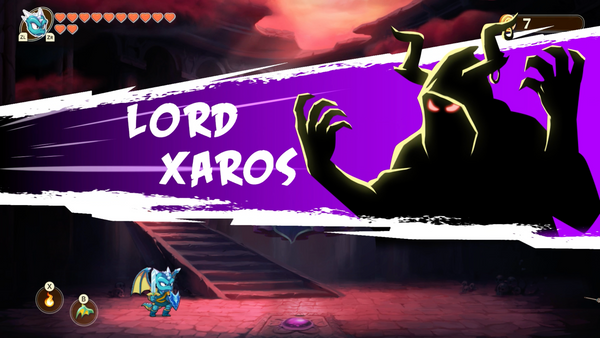 Lord Xaros is the final boss of Monster Boy and the Cursed Kingdom and you better bring your A Game. Although once you know his attack patterns, the fight isn&