Unlike the Golden Sword, you actually don’t need all of the Gold Armor Parts to finish the game. But that won’t stop us!

But first, here are the guides for the other Gold Parts in case you’re going to need them as well:

For the first of the Gold Armor Parts, we’ll need to be here…

Jump onto the middle stump of the tree that’s just to the left of the save point and sniff as the pig to reveal a button.

Ground-pound it and the chest will appear a little ways off to the left. But be quick, it has a timer.

To get across to the chest before time runs out, you’ll either have to be the lion and dash across or the human and air-dash across.

For this puzzle, you’ll need to be the pig (unless you have the dragon transformation) in this frame in The Volcano…

Head to this frame…

From here, fly upwards until you get to the door.

Head over to the switch, flick it, then go through the left portal and flick the switch on the right so that you can exit via the right.

… until you get to here. This may look confusing, but it’s actually very linear and straight forward. You would have already transformed into the snake and you’ll want to stay that way. slither along the moss and flick the switch.

Keep moving onwards but instead of going down the right exit, we want to go down the left one (picture below for reference)…

When you get to the middle, transform into the frog and rotate the room so that the chest is the right way up.

Now go back the same way that you came and go up the left side (it was the right side before) to where the chest is (again, picture below may help for reference).

And there’s your Gold Armor Part!

This one is super easy! Simply fly up from the save point and you’ll see a chest with the Gold Armor Part inside…

By just to the right, I mean that it is up the right side as you fly upwards and through the door. Here, there will be a challenge for you to dodge and block some oncoming spears. The penguin guard will call out whether you’ll need to dodge or counter and he’ll try to trick you from time-to-time. The spears will come from the left, right and from above. It took me a few times but once you get through it, you’ll be rewarded with a Gold Armor Part.

So now we have all the Gold Armor Parts, we can take them to Foximus in the frame below who will make them into the Golden Armor! 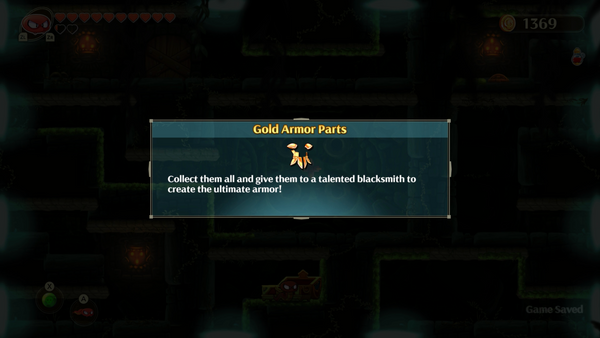