Marooners is a mini-game marathon party game that has up to six players chaotically fighting over coins to be the one player to come out on top. Whether you’re dodging rolling boulders whilst wailing on your friends or mining through stacked boulders to not be left behind, Marooners will have you and your friends sitting at the edge of their seats. And remember, if you die, you can always haunt them as a ghost!

The game’s controls don’t feel as precise as you’d like them to be, which can be a shame if you feel like you’ve been cheated out of a victory. The game has no rumble and hitting enemies and objects feels flat and lifeless. Your primary objective is to collect as many coins as you can whilst doing your best to stay alive. To mix it up, you can also pick up randomised items that are a nice bonus but don’t seem to present a demanding presence (which can be seen as both a pro and a con). When you’re the last player remaining, you get the big prize of 25 coins, but only if you can get to it in time.

Marooners has two Switch Modes: Chaos and Linear. These Switch Modes help to mix up the gameplay and how each round progresses. Chaos Mode randomly switches between mini-games partway through, forcing you to adapt to situations on the fly, whereas Linear Mode only switches when a game is finished (much better for newcomers).

During the character selection screen, when one player clicks ready, it prematurely begins the countdown to start the game. My friends and I were very surprised by this, especially when one was out of the room and we had to choose between yelling out to them or knocking them out early; we went for the former, but the latter was awfully tempting.

As you continue to play the game, you unlock new characters and weapons by levelling up. All of these unlockables are purely cosmetic and don’t add to the gameplay, but a progression system is still nice, despite how simplistic it is.

Enjoying our Marooners Switch review so far? Don’t forget to like us on Facebook and follow us on Twitter for more Nintendo Switch content. Also, please consider supporting us on Patreon so that we can continue to do what we love doing.

There is an online mode which certainly is a nice addition, but I found it nearly impossible to find anyone. When I did find players, the frame rate was very unsteady and it was just pure mayhem – and not in a good way.

Each mini-game mode has its own objective that compliments the task. For example, Crushing Chasm has up to six players in a circle arena with a spinning wheel above that casts light upon the ground; when the wheel comes crashing down to the ground, you need to be in the lit sections to avoid being squashed and eliminated. There are many other examples and each one does a great job complimenting the gameplay to keep things fresh.

The art direction is bright and colourful, but certainly quite generic. It has a ruinous civilisation approach with jungle, volcano and arctic themes that don’t do much to allow the game to create a personal sense of identity. However, the variety does help you to quickly know which mini-game your about to play, which is especially helpful in Chaos Mode.

Marooners‘ soundtrack is lively and fast-paced, matching the gameplay with its intensity. It fits well, despite it becoming quite repetitive after a while. The tracks change with each mini-game, but they all have the same tone and feel, with nothing memorable to note.

Click here to read our review of Crash Drive 2

Marooners teaches us that parties aren’t for making friendships, but for destroying them. Its chaotic nature will have you and your friends screaming at each other in the best way possible. However, Marooners immediately come across as generic in its presentation and the gameplay appears to be lacking in impact. It’s a fun party game, but it’s certainly not one where your party guests will be fighting over the Joy-Cons to play the next round.

Thank you for checking out our Marooners Switch review, thank you Game Drive for providing us with the review code and thank you to our $5 and up Patreon Backers for their ongoing support:

We at Switchaboo are huge fans of Drop Bear Bytes and cannot wait for the release of their debut title Broken Roads. Just now, a press release revealed that industry 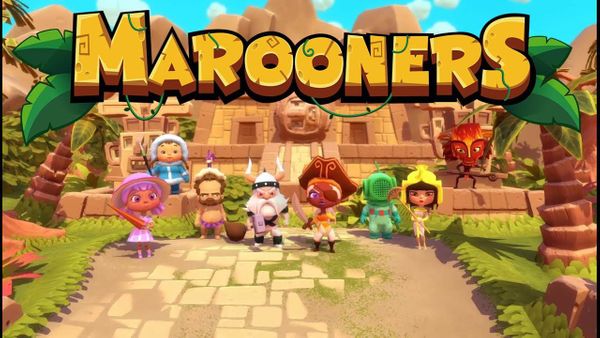