With our digital trail and online presence being surveyed by those claiming to protect us, when does enough become enough? Liberated tells a story of a world with a camera on every corner and officials monitoring every move we make after a tourist attack had taken place on St. Martha’s school, taking innocent lives and leaving families in despair. The age old saying depicts that the ends often justifies the means, but how much of our freedom to personal privacy must citizens be deprived of before enough is enough and just how well is that answer discussed in a video game set inside of a comic book?

When you sign up for a game played out in a comic book, it’s easy to assume that it will be done so on a flat 2D plane. Liberated plays like a twin-stick 2D action platformer that’s heavy on the sneaking and combat. This layout forces the player to consider each move carefully in order to avoid being caught by your enemies. The cover of darkness is your best friend as the game lets you hide behind walls and objects that not only let your opponents waltz on past to allow you to get the jump on them, but you can also take a breather and recover health quicker; in a pinch, this can be the difference between life and death.

Speaking of life and death, checkpoints are plentiful and you won’t often find yourself having to repeat much if you’re struggling to get past a specific area. I say ‘often’ because there were a few moments where I questioned why I had to replay short segments multiple times (such as riding up an uneventful elevator) where the checkpoint could’ve simply been at a closer point to the action, but these moments were rare. What wasn’t rare were frame rate dips, however I found myself quite lucky that I hardly ever experienced them during tense moments; I never found myself getting frustrated and dying due to a frame rate dip, despite them being clearly noticeable.

If 2D action games aren’t your forte but the story and setting intrigues you, you can choose to play as a Reader rather than a Player. This may be a fancy way of saying Easy and Hard modes, however the Reader setting certainly puts an emphasis on its namesake and allows you to enjoy the story without much resistance from enemy AI.

Another point to add if you’re not one who’s fond of action platformers is that you’ll come across the occasional circuit and code puzzle that breaks up the flow of action nicely. I honestly found them a joy to come across and they were a nice distraction from the all of the chaos and heavy-hitting story beats that the game continued to deliver.

Enjoying our Liberated Switch review so far? Don’t forget to like us on Facebook and follow us on Twitter for more Nintendo Switch content. Also, please consider supporting us on Patreon so that we can continue to do what we love doing.

Lastly, the HD Rumble certainly packs a punch when you’re getting hit or something intense is happening. The HD part of it may be a stretch as it simply felt like regular rumble most of the time, but the intensity of it increased depending on how much damage you had taken, which was a neat touch.

Liberated is a comic book come to life, with interactive panels in order to get your game on. Some of these panels also feature interactive cutscenes that can alter the outcome of the scene. Whilst 60% of the game is heavily based around plot progression in a comic book, the level design always takes place in a 16:9 aspect ratio throughout a relatively linear fashion. This is by no means a bad thing as Liberated is primarily focussed on continuing with the story its telling and its puzzles still provide a level of challenge that isn’t full of stealth and action.

If you keep up with my reviews, you’ll know that I am one to notice and appreciate a ‘show and not tell’ approach when it comes to storytelling. Pieces of the story’s puzzle will come together during natural conversations, revealing both the past that lead to the world’s dystopian nightmare and the present actions that attempt to put an end to it.

The Citizen Credit System (CCS) tracks your actions, dictating whether you are a good citizen or one that has been flagged for social non-compliance. Society’s right to freedom has been all but revoked, with authorities tracking everything from your social media accounts to your payment transactions.

What really hits home about Liberated is how potentially accurate its themes of cyber freedom reflects our current world. I’m not about to dust off the old tin-foil hat and rant about how the government is tracking my every move in order to determine just how many cat videos I watch each day, but a lingering and ever-growing fear that peoples’ data trails are being used to reflect one’s status within civilisation in the eyes of nations’ governments is one that has been played out time and time again. Examples such as Alan Moore’s V for Vendetta and George Orwell’s Nineteen Eighty-Four have popularised these theories of government control and society’s revolt and in modern events, one could point to the Chinese province’s Xinjiang state and its citizen surveillance phone application. At the end of the day, the game’s primary intention is to provide fun and entertainment, but its messages sure can speak to those prone to raising an eyebrow.

Liberated‘s black and white comic aesthetic works incredibly well with its themes of bleak helplessness. The 2D panels are expertly drawn and the attention-to-detail is certainly something to be admired. Whilst you aren’t privy to them as much, the game’s 3D cutscenes that adopt various camera angle shifts and interactive segments hold much to be desired, resembling stiff polygons and slow frame rates that one would generally find on the Sega Dreamcast. The gameplay also uses 3D models, but they’re less noticeable when the levels are set on flat 2D planes. As stated, these 3D cutscenes are rare and they don’t hinder gameplay in any way, but they’re certainly noticeable if you’re a stickler for that kind of thing.

If truth be told, I didn’t really take much notice of the game’s soundtrack. It doesn’t try to overemphasise itself, rather it lays down the foundation to compliment the plot taking centre stage.

Being an indie game, I can understand why Liberated doesn’t have voice acting and having the story presented in a comic book art style, it makes sense. However, I did find myself longing for some voice work, even if it was just a line or two to get an idea of each character’s personal nuances. However, that option may not be everyone’s cup of tea, so seeing it as something you could toggle on and off in the options menu would have been ideal.

Click here to read our review of WHAT THE GOLF?

Liberated is a fine example of how the video game medium can enhance the age old practise of storytelling. Its plot is not only enticing and full of twists and turns, but it also makes you ponder about the world we live in today. The game’s primary shortcomings are its simplistic (and sometimes clunky) gameplay, as well as its subpar 3D models, but these complaints can be easily dismissed if you’re in the mood for a good story.

Thank you for checking out our Liberated switch review, thank you to Walkabout Games for the review code and thank you to our $5 and up Patreon Backers for their ongoing support:

The game that helped to reinvigorate the video game industry in the west, Donkey Kong, is being reimagined by Monaco indie studio Drowning Monkeys Games with their new game Castle 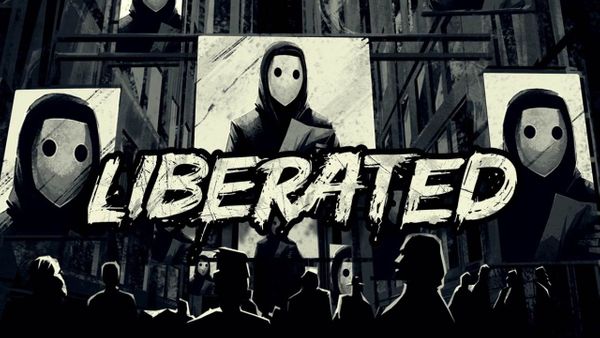 With our digital trail and online presence being surveyed by those claiming to protect us, when does enough become enough? Liberated tells a story of a world with a camera