For this week’s Switch Kickstarter Project of the Week, we will be looking at Chaosmonger Studio’s ENCODYA. The game is slated to release in Winter 2020 on PC, Mac and Linux, with port to mobile and console in the future. Here’s the rundown:

The sweetness and creativity of Studio Ghibli, the setting and atmosphere of Blade Runner and the humor and game style of Monkey Island: these are the ingredients that inspired ENCODYA, a point-and-click adventure game set in a dystopian future.

Neo Berlin 2062. Tina – a nine-year-old orphan – lives with SAM-53 – her big clumsy robot guardian –in a rooftop makeshift shelter in Neo-Berlin, a dark megalopolis controlled by corporations. Tina is an urban jungle kid, who has learned to live alone, scavenging from city dumpsters and eking out a living from scraps. Her funny robot is always with her, programmed to protect her no matter what.

One day, the little girl discovers that her father left her an important mission: to finish his plan to save the world from grayness! Tina and SAM embark on an incredible adventure across different realities full of bizarre robotic creatures and grotesque human beings. Through puzzles and exciting dialogues, they’ll find out the true meaning of being alive.

The game mechanic is the one of classic point-and-clicks: use the mouse cursor to walk around, explore a scene, interact with items and talk with characters. Furthermore, the developer introduced some randomization elements, to make each new game unique.

If you were wondering how to watch the Nintendo 20 minute Indie World presentation, or just couldn’t find it, here it is… https://www.youtube.com/watch? 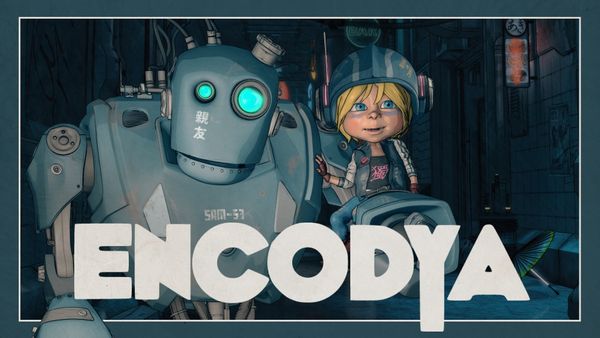 For this week’s Switch Kickstarter Project of the Week, we will be looking at Chaosmonger Studio’s ENCODYA. The game is slated to release in Winter 2020 on