Day three of PAX Australia saw the end of a wild weekend, and we were lucky enough to get an opportunity to speak to some fantastic indie developers. One that we’d like to highlight is Anthony from Screwtape Studios, talking about their Damsel game.

Alex: Hey, I’m Alex from Switchaboo and I’m joined here with Anthony from Screwtape Studios. So please tell us a little bit about Damsel.

Anthony: Damsel is an arcade action platformer, really focusing on speed attack, speed-running and it’s got that real fast-paced feel. It’s inspired by platform games from the early 90s like Commander Keen, Duke Nukem and Jill of the Jungle. So it’s really sort of trying to get back to those roots for me when I was like 10 playing games.

Alex: Fantastic, so a lot of nostalgia?

Alex: Congratulations on your Steam launch! It wasn’t that long ago so I imagine you’re pretty excited about all that?

Anthony: The excitement will come after we have a good sleep. But it’s been really good, a full-on couple of months. It’s nice to have it out there and have people playing it and giving us feedback, it’s really cool.

Alex: Absolutely! So the nerves are dying down a little bit as well after getting some positive feedback?

Anthony: Yeah I think we’ve been working on it for so long that we weren’t too nervous, we were just like, “Let’s just get this thing out and into peoples’ hands!”

Alex: Going into the game a little bit more, I noticed a bit of a comic book aesthetic you guys have going. What was the inspiration behind that?

Anthony: We really wanted to do that living Saturday morning cartoon/comic book them. It’s just a nice light way for people to engage with the game. If it was too dark and grim, I think it might’ve put a few people off. So yeah, we went with this light story, light world and the comic book theme really just suits that perfectly.

Alex: Definitely! On top of that, not only is there a comic book aesthetic but I also noticed some Asian influence what with some kanji in the background. Tell us a little bit about the setting.

Anthony: Yeah, so I did like cyberpunk stuff but we weren’t doing a cyberpunk game but I wanted to pull in some of that cyberpunk aesthetic without the cyber, I guess. Like VampPunk I think it’s what it is called.

Alex: You’ve got me stumped on that one (laughs).

Alex: Whatever it is, you’re doing it.

Anthony: Yeah, so it’s those bright neons, super urban setting. It’s just more fun than castles and forests and graveyards that’s been done. So factories and alleyways and stuff like that, it’s just something a little bit different and an excuse to have bright lights.

Alex: Going into the gameplay a little bit and the level design, are we looking at a level-by-level game or is this more of a metroidvania adventure?

Anthony: So we have like 15 arenas essentially, they’re closed off and they’re not linear and there are spaces that you can run around in and explore. So in these we’ll throw a different mission at you so you have to go in and rescue all of the hostages of disarm the bombs or hack servers and kill all the vampires. But it’s quite free-form, it’s like Pac-Man on steroids, basically.

Anthony: Yeah it’s all about clearing out the thing.

Alex: Is that going to be the game’s slogan? Pac-Man on Steroids!

Alex: So what can we expect from the weapons and is there melee combat or is it shooting…?

Anthony: So Damsel has an ultraviolet shotgun that shoots UV crystals which is a perfect thing for vampires. She also has a pretty devastating couple of melee attacks. You don’t upgrade your weapons and you don’t get new ones throughout the game, the toolset that we give you is the one that you play the whole game with. So we prefer to throw you into different situations where you have to use that in a different way. You will figure out the finer points of it and you can experiment with chaining together all of those different moves. It was the idea that you know, the game is Damsel, she’s female protagonist that’s sort of a topical thing at the moment. So the idea of gameplay that we wanted to explore was you don’t get anything given to you, you use the tools that you’ve been given and harness that. We hope that someone might take that lesson and apply that to their life, maybe. What you’ve got is good enough and you use that to succeed. So that’s sort of the philosophical underline that everyone can completely ignore if they want to.

Alex: Oh, I like that! So going from the weapons, we also have different abilities in the launch trailer. So I saw some dashing and whatnot…

Alex: So getting that high score, very arcade-like.

Alex: So is there anything else you’d like to tell us about Damsel?

Anthony: Well it’s available now on Steam. It’s $20US, I’m not sure what that is in Australia…

Alex: I think that normally comes to like $30AU.

Anthony: Yeah, something like that. Steam literally last week just opened up Australian pricing so it will be $20AU as well as soon as we get out of PAX and change it on the thing. And it will be available on Nintendo Switch early next year! So the producer tells me that they want it out in March, so it’ll probably be out in April.

Alex: And lastly for our audience, where can people follow you and get updates on Damsel?

Anthony: So you can find us on Twitter @damselgame, find us on Facebook ‘Damsel Game’, and you can also just search for Damsel on Steam. You can also visit damselgame.net.

Anthony: Thank you very much!

What do you think of Screwtape Studios’ Damsel game? Will you be playing it on Nintendo Switch when it releases? Let us know in the Comments section below.

Be sure to like us on Facebook in order to get updated with every article we post, along with more Nintendo content. And hey if you enjoyed this article, why not check out our interviews with Blowfish Studios about games such as: Storm Boy: The Game, JackQuest: The The Tale of the Sword, Qinoto and Projection: First Light? Day three of PAX Australia was a hectic wrap-up to an amazing event, and we were lucky enough to get an opportunity to speak to some fantastic indie developers. One 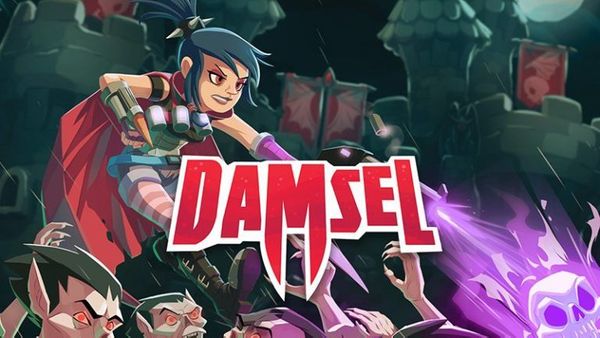 Day three of PAX Australia saw the end of a wild weekend, and we were lucky enough to get an opportunity to speak to some fantastic indie developers. One that