At PAX Aus 2019, we were fortunate enough to be able to speak with Stein Loetveit from Hildring Studio about their upcoming 2D platformer – Sacré Bleu.

Alex: Hello everyone, Alex from Switchaboo here and I’m joined by Stein for Hildring Studio, how are you today?

Stein: I am fine, thanks. My voice is cracking up a little but it’s pretty good, I’m happy!

A: [laughs] Well, that’s kind of good to hear… I hope your voice feels better after PAX.

S: No worries, we’ve got this!

A: We’ve got this! So please tell us about Sacré Bleu.

S: In Sacré Bleu, you play as a musketeer who is thrown into prison and you get to blast your way out with your Steam Blaster. There will be zombie enemies and stuff… but mostly steam blasting!

A: I had a little play of Sacré Bleu yesterday and I’d like to get it in your words – what does the Steam Blaster do?

S: The Steam Blaster will propel you in the opposite direction of that which you are pointing. This means that you will fly one way but if you are pointing the blaster at something – physics objects, enemies, whatever – they will go the other way. So that means you can have a one-stop solution for moving around as well as solving puzzles, combat, all that jazz.

Enjoying our Sacré Bleu interview so far? Don’t forget to like us on Facebook and follow us on Twitter for more Nintendo Switch content. Also, please consider supporting us on Patreon so that we can continue to do what we love doing.

S: It just happened, what can I say? One day, I drew a drawing of a musketeer and I thought, ‘hey, what if I just made a game?’ and hundreds of hours later, I thought, ‘oh no, what have I done? I’m making a game!’.

A: Got to the point of no return?

S: Exactly! I have had so many projects in my life that I’ve cancelled and left, but I really want to finish this one.

A: The art style really draws me in; I get a Looney Tunes vibe from it.

A: [laughs] Well, do you have any artistic inspirations?

S: Yes, absolutely! Looney Tunes is definitely something that I’ll strive for. I’m an animator by trade where I work in films. I’ve been animating on the last three Spiderman movies.

S: I’ve been doing animation for 15 years, but this is my first foray into 2D animation.

A: And have you always loved video games? Has this field always been one that you’ve wanted to crack into?

S: And that just happened too! It’s been three days of PAX, so much fun, and this is the first time that I’ve shown Sacré Bleu at a big event. It’s so amazing, I like it.

A: So Sacré Bleu is planned for Nintendo Switch in addition to PC and other consoles, right?

S: Yes, the Switch is our target platform because with Sacré Bleu being a 2D platformer, it just fits the system perfectly. It’s coming to PC by default as I’m making it on a PC and if I can get access to any of the other consoles, I’ll definitely get that going as well.

A: Do you have any plans for Switch exclusive features like HD Rumble or gyro controls?

S: Of course. That will just take a little bit more development time, but absolutely. I’ll take my time and do whatever I can to make it feel at home on Switch. As the Switch has a small screen, we already have code in place for adjusting the camera and for that to work better. So whatever we need to do to make it fit the console better, we’ll do it. Also, console holders will demand it as well. That’s the same for UI and button layouts.

A: It’s that extra little bit of maintenance…

S: Absolutely! You won’t pass the test if you don’t do it because they will rigorously test your game.

A: I don’t doubt it. So with all of these hurdles that you have to go through, have you had any challenges or roadblocks that stick out to you during its development?

S: I think I am the game’s biggest roadblock as I do most of it myself [laughs]. I hire freelancers whenever I need to but since I do so much of it and as I am only one person, the process takes a long time. I would love to get funded and be able to hire more people so that the game gets made faster.

A: Have you considered Kickstarter or any other fan funding website?

S: Yes, it’s constantly on my mind. Once the game gets enough traction, I will absolutely try and do any of those things.

A: So as you said, you’re just a one-man team, so you don’t have anyone else helping you aside from freelancers?

S: Well, I have my wife who will help out with logistics and whatnot but really, I’ve hired freelancers, a producer, a software engineer for Switch porting, musicians and sound guys.

A: Is there anything else you’d like to say to our readers?

S: Yes, please play Sacré Bleu when it comes out, of course.

A: And where can fans go to learn more about Sacré Bleu?

S: So the Twitter handle is @hildringstudio and please follow the game’s development at hildringstudio.com as well.

A: Thank you for your time, Stein.

Click here to read our interview with Powerhoof about The Drifter

Thank you for checking out our Sacré Bleu Interview and thank you to our $5 and up Patreon Backers for their ongoing support: At PAX Aus 2019, we were fortunate enough to be able to speak with Andrew from Juicy Cupcake about their upcoming multiplayer party game – Brief Battles. Alex: Hello everyone, this 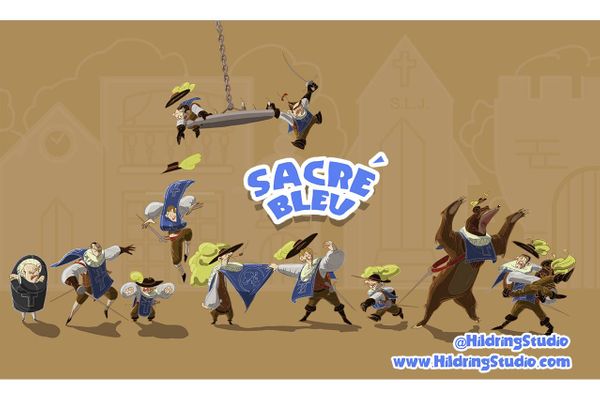 At PAX Aus 2019, we were fortunate enough to be able to speak with Stein Loetveit from Hildring Studio about their upcoming 2D platformer – Sacré Bleu. Alex: Hello everyone,