Today, we sat down with Michelle Olson and Eva Wierzbicki from Banana Bird Studios to discuss their upcoming adventure game Beasts of Maravilla Island. We recently featured this title on our Kickstarter Project of the Week series and we simply had to reach out to ask the team a few burning questions.

If you’re not in a reading mood, you can always listen to the interview with the YouTube link below…

Alex: Hello everyone, this is Alex from Switchaboo and I’m joined here by Michelle and Eva from Banana Bird Studios to talk about their upcoming game Beasts of Maravilla Island. How are you today?

A: Can you please tell us a little bit about Beasts of Maravilla Island?

M: Beasts of Maravilla Island is a 3D adventure game where you explore a magical jungle island in order to discover extraordinary creatures, learn their behaviours and most importantly, photograph their majesty. Through the game, you encounter a number of different incredible hybridised animals and you need to complete your grandfather’s legacy to bring the photographs back and share the magic with the world.

A: The art style looks absolutely breathtaking. Was a Nintendo 64 style aesthetic what you were going for?

M: I love that, yes! I’m glad that those notes land.

A: I also really liked the voice over from the grandfather at the start of the trailer that gives a lot of motivation for the protagonist. Can you please tell us more about that?

M: So you play as Marina Montez. Her grandfather was a nature artist who drew sketches which you can see in the Field Guide that you use whilst playing through Beasts of Maravilla Island. He visited the island but when he brought back his findings, no one believed him. So, he has humbly requested for his dying wish that his granddaughter visits the island to take photographs of these magical creatures and share their magic with the world so that they can continue to exist.

Eva: The most important thing for Marina is to make people believe in this magic because as they say in the opening cutscene, ‘how can you save what you do not know?’. It’s a lot about bringing awareness to these animals.

M: I also want to give a shoutout to our amazing voice actor Dave Rivas, he’s amazing.

A: It seems obvious, but Beasts of Maravilla is clearly inspired by Pokémon Snap. Have you taken inspiration from any other series?

M: Absolutely. The biggest motivation for us game-wise would have to be Pokémon Snap, The Legend of Zelda: Breath of the Wild and the Hyrule Compendium within Breath of the Wild. Also, one game that the whole team was required to play was ABZÛ, which is the beautiful underwater exploration game by Giant Squid, because there is so much beautifully peaceful interaction with the animals that are in the environment around you. It really captured the emotion that we were going for.

E: It’s also important feel humbled by the environment and not feel like you have control over anything but rather you are apart of it and an observer.

A: I do have to ask, what was your reaction when New Pokémon Snap was announced?

M: Oh my gosh! It was really interesting. We were stunned because it had been so long and we thought that there probably wasn’t going to be another Pokémon Snap for the foreseeable future, so all of us as player were like, ‘Oh my gosh, this is so exciting!’ but as developers, we thought that we really need to make sure we set ourselves apart so that people know despite it being heavily inspired by Pokémon Snap, Beasts of Maravilla Island is its own unique game.

A: Were you concerned about announcing your Kickstarter within a month of its announcement?

M: It was certainly a little scary because even though we do share the main essence, we’re hoping that with the addition of the freedom to explore, the puzzle solving, the narrative and its personal interaction with the island’s inhabitants, we will set ourselves apart.

A: Why was Nintendo Switch your first choice of platform after PC?

M: The funny thing is that originally, we intended to develop Beasts of Maravilla Island only for the Switch; we hadn’t planned to do a PC port of it. However, quarantine started and we had to switch to distributed development. We didn’t have ease of access to development kits, so we wound up having to make this work on PC anyway. We have a pretty strong PC build of it going but all of us on the team love what the Switch’s hardware affords us to be able to do. We’ve implemented gyro controls to move around the camera and we use the HD Rumble in order to recreate the simulation of the presence of animals rustling in the bushes and the like. The ability to be able to take the game into nature with the Switch’s portability and share it with others was something that was really important to us. We also feel as though that this game’s audience is on Switch, so we really want to make sure that we get it on there.

A: I always love a game with good HD Rumble and gyro. Can you tell us more about that?

M: We’ve definitely been using gyro mostly for the camera aiming. When you switch from the third-person perspective to first with the camera, the gyro takes over and you can move it around like a real camera.

A: I would’ve loved to have seen that on the Wii U.

M: That would have been awesome!

A: But we’ve got it on the Switch so that’s OK.

A: Can you please tell us a little bit more about how Beasts of Maravilla Island‘s development has been coming along, if there have been any challenges and how it stands in mid 2020?

E: The biggest challenge has definitely been after the pandemic hit. We started out in this big lab space all together and we’d meet up at specific times so that we can communicate and work with each other. Transitioning into working remotely mostly through Discord definitely took a little bit of time but we’ve actually been able to do it very well. We have this organisation system going on where people are still able to communicate. We still have lab times where we all jump on Discord in different chats and are able to send each other documentation and screen share. I’m really proud of everyone.

Enjoying our Beasts of Maravilla Island Interview so far? Don’t forget to like us on Facebook and follow us on Twitter for more Nintendo Switch content. Also, please consider supporting us on Patreon so that we can continue to do what we love doing.

A: So I imagine that those challenges have pushed the release date back a little.

M: Definitely. When we were all transitioning to remote, that took a hit on our productivity. However to their credit, the team has managed to pick it back up; we’ve been working hard ever since and we’re on track to get the game out the door by Q4 2020. We mentioned December on our Kickstarter but it may come a little earlier depending on how the certification process goes.

A: Your Kickstarter campaign has been an instant success, reaching its initial goal within just 13 hours. How has the team’s reaction been to the immediate success?

M: We could not believe it at all!

E: Our messages were exploding all day!

M: We were like, ‘what the heck is going on?’. We’re quite a young team and we were certainly very nervous but we thought, let’s give it a shot. We had a subset team that was working hard on the Kickstarter for a month up until its launch. We poured our hearts and souls into it and I remember waking up at 7:30am to hit that launch button and I said, “OK, we’ll just have to see how it goes”. We were absolutely astonished at how quickly we met our funding goal; it was just a huge relief and huge honour to have so many people support us and enjoy our game’s concept. It was amazing!

A: What do you hope to achieve with the remainder of the campaign?

M: Because we didn’t expect to reach our funding goal so quickly, we didn’t really discuss the stretch goals until after the campaign had started. We thought that we’d be lucky if we made it by the end of the campaign but with the turnaround being so fast, we thought that we really needed to come up with some stretch goals. After the team discussed it, we’re really excited because we’re now pretty close to adding more translations. Originally, we thought perhaps English and another one or two but now, it’s really important to our international following that we translate the game and get this into everyone’s hands. In addition, we put one at $20,000 where the team would love to add a selfie mode.

A: That’s exciting! Is there any customisation that you can do for your character for the selfie mode?

M: Not at the moment but if we reach that $20,000, we can figure out in more design detail and make it more exciting. At the very least, we have some really cute facial animations that our character can make.

A: Is there anything you’d like to say to backers or to people who are on the fence about backing?

M: We are just in awe of the passionate support that we’ve received from people; both friends and family and from strangers on the internet who discovered our product and really believe in it. That is the most validating and wonderful feeling in the world. We’re so touched and so excited to make this game.

E: I am completely honoured! Thank you so much to everyone that has spread the word and backed us. It’s been absolutely crazy and I am stunned that we’ve managed to get this far. For anyone who is on the fence, I would recommend checking out the demo which is on itch.io right now. We’ve been working to polish that even further for the full release but it definitely captures the essence of what we are going for.

A: Is there anything else that you’d like to say to our readers?

M: Keep playing awesome Switch games and supporting Switch related media. Thank you so much for reading about us talking about our little dream! It means a lot to know that people are interested in what we are doing. Thank you for having this interview with us.

A: You’re very welcome, it’s an absolutely pleasure. Lastly, where can our readers go to learn more about Beasts of Maravilla Island and keep up to date with the game’s progress?

M: We are active on Twitter, Instagram and Facebook, as well as Discord where we have our own server. We post updates every couple days on all of those but we also have a website where you can read more about the game and check in on big major updates.

A: Perfect! Thank you so much Michelle and Eva for taking the time to have a chat with us.

M: Thank you so much!

E: Of course, it’s been a pleasure! 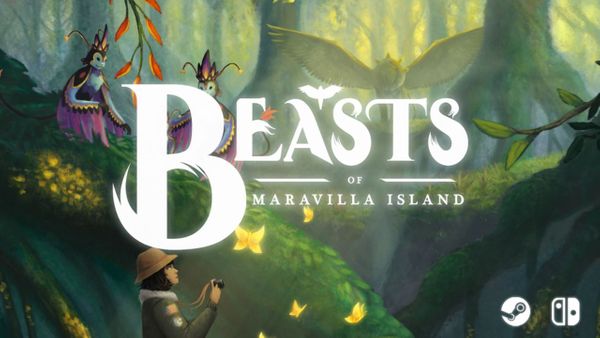 Today, we sat down with Michelle Olson and Eva Wierzbicki from Banana Bird Studios to discuss their upcoming adventure game Beasts of Maravilla Island. We recently featured this title on