Graceful Explosion Machine is a frantic shoot ‘em up game that requires quick thinking and even quicker reflexes. Control the GEM fighter and blast your way through deep space against hordes of oncoming crystalline enemies to find your way back home.

Graceful Explosion machine is a very smooth experience that is easy to control. There was not a single technical hiccup throughout the entire game, so if you make a mistake, that’s on you.

The action is incredibly engaging with tactic HD Rumble feedback that makes the combat feel intuitive and alive. The crisp graphical art-style also makes it easy to differentiate between yourself and your enemies.

Each level has three phases, each one acting as a checkpoint. This is a staple throughout the game aside from the boss levels that require you to complete the entire level in one go.

As you are fighting hordes of enemies, the game prevents you from constantly shooting your basic attack with a burnout feature. This then requires you to use your special abilities (or even your dash maneuver) that uses up your ship’s power. You fill your power meter by collecting crystals that defeated enemies drop. Graceful Explosion Machine encourages (and often requires) you to utilize all of your weapon options, keeping combat fresh and exciting.

There are no power-ups in the game and health drops scarcely, and instead relies on the player to organically improve rather than artificially upgrading your skill.

The art design is very crisp with it’s simplistic crystal aesthetic that wouldn’t have taken too much time and resources to implement. The game pops in many ways along with its mood setting music. Graceful Explosion Machine is a challenging game that is rarely unfair.

Despite the art-style making it easy to differentiate between enemies, a big explosion can make it difficult to see surviving enemies and they can often hit you in the mayhem of it.

The levels lack variety visually, and the only major shift in aesthetic are various color changes. This makes it feel like you are just playing one long level. The game also lacks variety in its objectives. To progress in each level, you only need to beat all of the enemies that spawn throughout each phase. Graceful Explosion Machine could have easily benefited from some variety in missions, like a capture the flag mission or a dog fight mission with other enemy ships.

The issue of variety also becomes apparent when considering the lack of story. We are firm believers in gameplay over story, however a more fleshed out plot could have made the endless action more engaging. Not asking for much, just a few still images in between the occasional level to show some form of progression.

(Above is an image of a cut scene that consisted of charmingly simple still images. A few of these sprinkled throughout the middle of the game could have vastly improved the story aspect.)

Graceful Explosion Machine is a very fun experience that doesn’t overstay its welcome. Its aesthetically pleasing art design and smooth gameplay is a treat to play through that becomes surprisingly addictive. However, the game becomes a little repetitive with its lack of variety and could have greatly benefited from some story beats across each level to provide some form of progression.

Do you agree with our review of Graceful Explosion Machine? Let us know in the comment section below.

Be sure to like us on Facebook and follow us on Twitter @switchaboonews. And while you’re here, why not check out our Quick Review on Splasher, the closest thing to a Splatoon 2D platformer that we may ever get? In the physical version of the Xenoblade Chronicles 2’s soundtrack, there was a discussion between Tetsuya Takahashi and Koh Kojima. In that discussion, they discussed future ambitions for 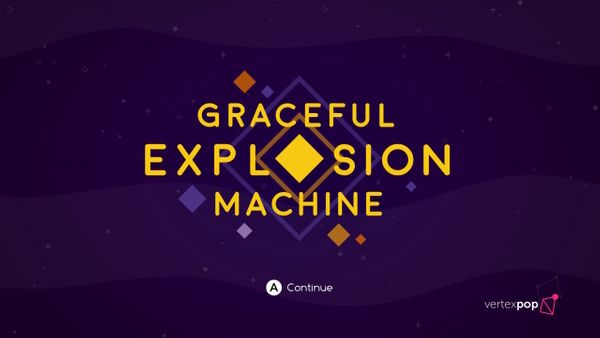 Graceful Explosion Machine is a frantic shoot ‘em up game that requires quick thinking and even quicker reflexes. Control the GEM fighter and blast your way through deep space against