Damsel is an arcade action platformer full of bite-sized levels for you to quickly progress through from one to the next. The plot follows Damsel, a light-footed special agent with just the right amount of sass, as she takes on the underbelly of the corporate vampire world. Uncover their sinister plots, complete your missions and put a stop to their human kidnappings.

Damsel’s gameplay is relatively straightforward; run, jump and shoot your way through vampires and their lairs in order to complete your mission objective. These range from disabling laptops to freeing hostages from their binds. Sometimes these objectives simply require you to press a button, yet others may require a bit more controller action on the player’s part.

The game’s campaign has you proceeding from one level to the next, with short comic strips in between. These levels are bite-sized and are focussed on allowing the player to set new high scores and fastest run times to compare against players around the world with online leaderboards. Having these displayed at the end of each level will make any budding speedrurner want to play each level over and over in order to gain their brief moment in the spotlight. There is also an arcade mode that allows you to attempt getting a high score whilst trying to make it as far as possible with a handful of lives, and Damsel Dash which honestly felt like much of the same thing but randomised.

It is clear that when it came to gameplay, most of the focus went into how Damsel moves. The special agent has a wide range of manoeuvres, such as shooting downwards in midair to ascend and pressing down+A to perform a dive attack. On top of that, your gun fire can have additional effects, such as repelling enemy projectiles and blowing up poison barrels so that effected enemies (and yourself if you’re not careful) take only one shot to kill. These extra details add to a player’s strategic approach and helps to keep the gameplay from becoming stale and repetitive.

As the levels progress, the stakes (pun intended) get higher. Each mission will require you to ensure that no hostage is killed from one of your stray bullets or you don’t set off a time bomb. These measures are implemented to ensure that the player doesn’t go in gun-ho, requiring thought and caution. It also makes speedruns and high score attempts that much more challenging. The game becomes quite difficult the further you proceed, but a chillout mode can be activated that prevents you from dying if you simply wish to advance the story.

From a performance perspective, the gameplay runs relatively smooth, despite the occasional stutter here and there. However, there are some pretty significant hiccups during transitional loading times, in later levels when there are a lot of enemies and when you fall from great heights. Whilst these can be fixed in later performance updates, they can be a little jarring despite their infrequency. Combat can also feel odd at times, where actions feel as if they don’t connect properly and when you’re being flung to the other side when a big baddy bull rushes you.

I’m also always disappointed when a game ported to the Switch doesn’t utilise the HD Rumble feature. Throughout my entire time with Damsel, the controller remained perfectly still, which is a shame as there were many opportunities to utilise the feature: melee combat and cutting rope to free prisoners to name a few. The game’s action can often feel like moves aren’t connecting when they are, so a bit of rumble could have definitely helped out with this.

Each level is quick and easy to breeze through whilst still containing a respectable amount of complexity. If you want to speedrun these levels, they aren’t straight forward for you to be able to succeed within a single attempt, that’s for sure.

Most levels contain hazards that may require you to perform a certain action. For example, electric barriers don’t do any damage to Damsel, however they momentarily disable your gun which can often be the difference between life and death. However if you’re willing to take the time, you can disable these hazards by finding and destroying the Power Station. There are also time bombs to disable, security cameras to destroy unless you want more zombies coming after you and the classic platforming hazard – spikes.

Some of the level layouts are reused across the game’s 75 level which was disappointing at first, until I realised that the level contents and mission objectives are altered in a way that keeps them fresh.

The plot and its delivery is the most unique aspect of Damsel, with each level transition progressing the plot with still cutscenes like they’ve been torn straight out of a comic book (which I would totally read). The story may not be as riveting as you’d like, but it does have the odd twist and turn, as well as some well executed lines and characterisation.

Each level mission does a great job at coinciding with what is coinciding within the story. I was initially concerned that each level was just going to be another random fetch quest, but with examples like ‘Kill x Vampires’ when Damsel states in the comic scene prior that she has company or ‘Rescue the Hostages’ when uncovering that the captured humans may be used as slaves makes the plot progression that much more believable.

When rescuing hostages, a little animation appears above in order to show their hands bound, but what is also shown is the hostage’s name. This feels like a completely unnecessary addition, but it’s a neat touch that Screwtape Studios went that little extra mile for, despite each male and female hostage looking the same.

Without giving away any spoilers, the ending is quite unceremonious. I was surprised to not even see any credits roll. However, it does leave the story open for the possibility of a sequel.

There are two aspects to Damsel’s graphical department: the comic book cutscenes and the gameplay. The cutscenes are well illustrated, with an expert level of colour and detail that you would like to see when flicking through the rack wondering what you’re going to read next. The gameplay graphics are a little rougher around the edges, but still keeps the comic book charm.

You may notice the odd detail in the background showing that Screwtape Studios really wanted the world to feel fresh and occupied. Down to the light peering through a turning wheel, neon lights of Kanji characters or (my personal favourite) a sign that reads “Legitimate Business Inc.”, it all makes the world just that little more believable whilst simultaneously making the player chuckle with some tongue-in-cheek humour.

Damsel’s soundtrack is energetic and blood-pumping, but also quite generic. It’s not its most standout feature, but it certainly fits the bill. It may also get a little repetitive at times, but nothing that’s going to make you bang your head against a wall.

The hostages’ muffled screams can get annoying after a while… it may not be as bad, but it’s the same type of annoyance as the Baby Mario cry in Super Mario World 2: Yoshi’s Island. You know the one.

Damsel is a high stakes (pun intended) thrill-ride that will test your platforming mettle against those evil corporate vampires. It’s main issues lie in some technical difficulties which may be patched up in the future and the lack of HD Rumble makes combat lack weight. With all that said, the plot presentation and general gameplay is filled with enough personality to provide an experience that is easy to recommend.

To save you looking around for it, here is the Super Smash Bros. Ultimate Hero Presentation: 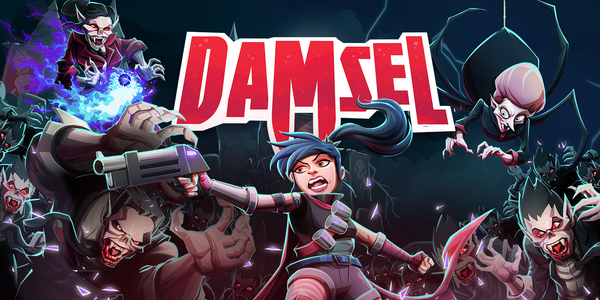 Damsel is an arcade action platformer full of bite-sized levels for you to quickly progress through from one to the next. The plot follows Damsel, a light-footed special agent with