Raising a daughter can’t be that hard… can it? Set in a dystopian future where humanity no longer lives on Earth and has been forced to take to the skies above. After the destruction of one of these Arks, a young 10 year old girl is placed in your care by the Administration. You now have to look after her, making sure that she grows up happy and healthy, which sounds pretty easy, right?

Ciel Fledge is surprisingly more complex than I initially expected of a “daughter raising simulator”. After the game’s initial cutscene, you are abruptly welcomed with the option to choose your own stats. Having been given little to no context about the game’s combat structure, I wasn’t sure what I was doing.

Upon first glance, you may not expect how convoluted things can get in Ciel Fledge. The game throws a lot of information at you from the get-go, especially when it comes to the combat. This was a feature in the game that I didn’t expect to be so in-depth and for someone who expected a relatively casual experience, it was much more overwhelming than I had expected. Although while it may take a while to wrap your head around the battle system, it is very fun and engaging once you do. However with all that being said, it’s not the most intuitive design to play with a controller or Joy-Cons; it appears to have had either mouse or touch controls primarily in mind from the ground up.

Speaking of overwhelming, the game’s schedule menu is very cumbersome. For this, I am referring to the daughter raising simulation aspect of the game. It doesn’t play out like your typical sim game as you’ll spend most of your time rifling through menus and text boxes in order to set up schedules to cater to your daughter’s needs. You’re required to balance her life through lessons, socialising, rest, etc.. Making sure that you balance what you teach her is very important as mastering different areas of your focus tree will affect the techniques you can use in battles.

The entire game can be played with the touchscreen, which is a nice addition. With the diamond-shaped interface during battles, it can be awkward navigating it with traditional controls, so being able to use the screen is arguably the most ideal method.

The colourblind mode makes the combat very accomodating. As the tiles at the bottom are colour-based, it can be difficult for those who are colourblind to quickly differentiate. The mode turns each group of tile to deeper shades of grey and whilst I am not colourblind and didn’t need it to assist, my partner is and they agreed that it would be the difference between being able to play the game and not.

Enjoying our Ciel Fledge Switch review so far? Don’t forget to like us on Facebook and follow us on Twitter for more Nintendo Switch content. Also, please consider supporting us on Patreon so that we can continue to do what we love doing.

HD Rumble has been implemented throughout the game in order to add to the suspense during key moments. Whilst the use of HD rumble is infrequent, it is still used to great effect and works cohesively with what is happening on screen.

Ciel Fledge certainly has an interesting concept on its hands with a unique setting that adds to the world’s depth. As I progressed, I found myself growing more-and-more attached to Ciel (or whatever you decide to name her) and was genuinely concerned for her safety and wellbeing. However, this plot a while to flesh out, making the opening hours tedious.

The calendar system in Ciel Fledge is interesting as the game has created new names for the days and months. When I first started playing, it made me scratch my head but after playing the game for a few hours, it became evident that this implements an intriguing yet subtle method to show how the world has changed.

As I was reading through each character’s dialogue, I noticed some unfortunate translation errors. There was nothing drastic and the message always came across, but some sentences just didn’t flow well. You also rarely get to choose dialogue, making each character appear robotic and lifeless, even when they’re actively addressing you.

The art style is very sharp and clean. The simplistic backgrounds allowed for the characters’ details to be highlighted, giving them a lot of personality and grace. The colours are beautiful and delightfully pop out to be a treat on the eyes.

The animation during battles and tutorials is absolutely adorable, with chibi versions of each character rocking back and forth. It makes the battle system seem less intimidating which, to me, was welcomed.

The soundtrack is very catchy and upbeat, a lovely accompaniment to the clean art style. However, it can often sound overzealous to the point where it is too heavy for the scene that is occurring. This isn’t always the case, but it is very jarring when it does.

It should also be noted that whilst there are sections of the game where there is a shift in music, it can prove to be VERY repetitive as I found myself tuning out half the time.

Click here to read our review of Brief Battles

What Ciel Fledge does right, it does so adequately. Studio Namaapa has tried to cram a lot into the game and I am able to see their intentions, however its execution leaves much to be desired. It’s a nice distraction, sure, but as players will be wanting to go into Ciel Fledge for an easily digestible experience, the overcrowded menu systems coupled with the barrage of information that the game initially throws at you will make it anything but.

Thank you for checking out our Ciel Fledge Switch review, thank you PQube for the review code and thank you to our $5 and up Patreon Backers for their ongoing support:

For this week’s Switch Kickstarter Project of the Week, we will be looking at Klabater’s Help Will Come Tomorrow. The game is slated to release approximately in April 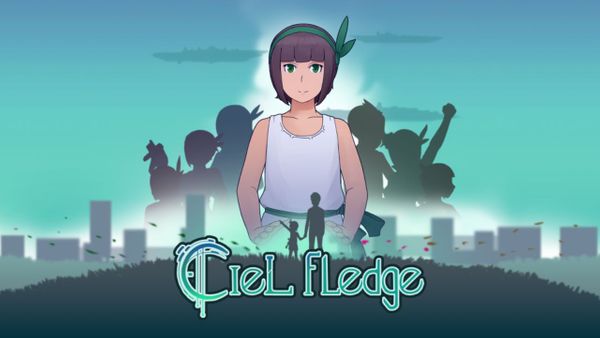