BurgerTime Party! replicates classic arcade games that feature 2D puzzle platforming with an inability to jump and ladders that allow access to multiple layers. Peter Pepper must create hotdogs and burgers whilst avoiding enemies that pop out of trash cans. Fans of the 80s classic rejoiced at the announcement of BurgerTime’s return to Nintendo Switch.

First off, BurgerTime Party! runs without a hitch and Peter Pepper’s movements feel fluent and intuitive. The game’s design works well with the gameplay concept, requiring you to walk over layers of a burger or hotdog so that they fall from top to bottom in order to complete the dish.

But there’s more to it than that. Having three lives for every level attempt, you will lose one if you collide with an enemy. You can attack them by throwing pepper in their faces, making them momentarily stunned and allowing you to walk through them. It’s also a great idea to make the food fall whilst the enemy is on top as it will fall by an additional layer for each enemy on the food, rewarding you with more points.

BurgerTime Party! has four modes: Solo Burger, Main Burger, Battle Burger and Challenge Burger. You’ll begin with Solo mode and each other mode is unlocked the more that you progress. Solo Burger is the basics of the game and as the name suggests, it can only be played solo. This mode can be treated as a training mode as with its lack of features, it does grow repetitive after a while. Main Burger is where the gameplay takes to a whole new level with power-ups and 1-4 player co-op, which is where this game truly shines. That leads to Battle Burger where players play as Peter Pepper and the others as the enemies. This is a great party mode and helps with the longevity of the game as it would feel barebones if it only contained the Solo and Main Burger modes. Lastly, Challenge Burger allows for online leaderboards but with its repetitive gameplay, it gets old real quick.

Enjoying our BurgerTime Party! Switch review so far? Don’t forget to like us on Facebook and follow us on Twitter for more Nintendo Switch content. Also, please consider supporting us on Patreon so that we can continue to do what we love doing.

BurgerTime Party! features an achievement system that requires you to fulfil a certain action x amount of times to unlock. Unfortunately, they don’t have any gameplay benefits and with the Switch’s lack of trophy system, it all feels just a little pointless.

Considering BurgerTime Party! is a Nintendo Switch exclusive, it’s not surprising that it features a touch of HD Rumble. It occurs when you walk over food, providing nice feedback during key actions.

Each level is designed to be quick and easy, perfect for on the go gameplay on the Switch. Most can be finished in under a minute but as is usually the case with arcade games, you’ll often need multiple attempts to get a perfect three-star run.

For a $30USD retail release, it’s very disappointing to see that BurgerTime Party! has no hint of a plot aside from quick still shots of customers coming in to buy lunch at a fast-food restaurant and discarded food taking revenge. That isn’t to say that a game is make or break on its story, far from it, but having no motivation as you progress from one level to the next dilutes the experience. However, the colourful and quirky cast of characters brings a lighthearted coat of paint.

The graphics are crisp and colourful, with cartoon style animations that appeal to players of all ages. However, character designs and features are all very generic and soulless, making the game unmemorable and without originality. The backdrops are always the same, just with different shadings, making each level feel repetitive and boring.

The soundtrack is lighthearted and catchy, with an opening and closing jingle that is reminiscent of the original game from the 80s. Aside from that, it is, as seems to be a running theme here, generic and repetitive.

BurgerTime Party! is a fun arcade game to take out on a bus ride to beat a couple bitesized levels or even to load up at parties, but its generic presentation and repetitive gameplay can leave the experience unmemorable. It’s difficult to recommend with a $30USD price tag but at the end of the day, it’s fun and runs without a technical hiccup. It’s also a nice little blast from the past for those who grew up playing the original 1982 classic.

Thank you for checking out our BurgerTime Party! Switch Review and thank you to our $5 and up Patreon Backer for their ongoing support:

A Knight’s Quest is a Zelda-inspired 3rd person adventure game that has its moments, but falls short in a lot of areas. For anyone wanting to buy a game 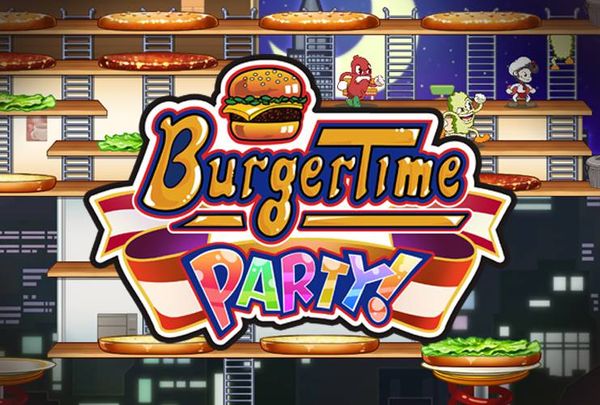 BurgerTime Party! replicates classic arcade games that feature 2D puzzle platforming with an inability to jump and ladders that allow access to multiple layers. Peter Pepper must create hotdogs and