Can’t wait for the upcoming Paper Mario? Itching for a Zelda-like story and world? Haven’t had your fix of fresh Pokemon battles in some time? Then Bug Fables is the mishmash from heaven that you need.

As you traverse the quaint, Bug Life world with your rag-tag team of cliches and bumbling amateurs, you end up in conflict with other insects and the like, thrust into battles that have you take turns to select moves, use items or unleash special abilities. In concept, it sounds strikingly similar to Pokemon, and in execution, that’s exactly how it feels. Yet, it’s familiarity is exhilarating, as it manages to elicit a similar satisfying punch with a refreshing twist.

Rather than simply pressing a few buttons and watching as your enemy’s health drains to zero, you take part in some small, fairly easy minigames: press X when the cursor hovers over the slither of the bar in front of you, hold the down button until the bar fills and then unleash, etc. It’s simplistic enough to be intuitive but engaging enough to not be dull or repetitive, hitting that sweet medium.

Enjoying our Bug Fables Switch review so far? Don’t forget to like us on Facebook and follow us on Twitter for more Nintendo Switch content. Also, please consider supporting us on Patreon so that we can continue to do what we love doing.

Beating up your cohorts isn’t all you’ll do in Bug Fables, though, as you’ll also find yourself adventuring, searching for treasure, delving into dungeons that many have fallen victim too and throwing your hard-earned cash around like the richest insect in town. The dungeons are tight-knit and well-paced, the towns are slick in design and easy to navigate and the open world is a beaut.

Cliche but entertaining characters with a serviceable, albeit generic story that serves to complement the gameplay and bring the vibrant and colorful world to life? Bug Fables is like a lot of first-party Nintendo games in that regard, as it’s charming enough to carry the experience, without hitting any noteworthy strides or peaks. You won’t be brought to tears or be engrossed in the world’s lore, but the narrative and cast are engaging enough to reel you in and keep you motivated to push on to each next chapter.

Bug Fables opted for a 3D world with 2D sprites and designs, feeling like Paper Mario meets Zelda in the best kind of way. The characters are not only charming in their dialogue but also in design – they might not be Pokemon-levels of awesome, cute, what-the-hell? and all that comes in-between, but they’re pretty close, nailing that cutesy, animated kid’s film aesthetic whilst also relishing in their own style and personality.

Upbeat, cheery, fantastical music with weighty sound effects that complement the unbelievably satisfying combat animations is what Bug Fables brings to the table – it doesn’t disappoint, as you feel as uplifted and energized as you’d hope to with a game such as this. It doesn’t sport the most memorable of scores by any means, but what it does present is whimsical joy.

Click here to read our review of Sky Racket

Bug Fables is definitely worth splashing out on, as it’s pretty cheap considering what you’re getting, which is an endearing journey with a heartfelt cast on a fantasy quest with a charming, kid-friendly aesthetic that has nearly as much personality as most of the first-party Nintendo games that cost significantly more. If you need something upbeat to drag you through the tenous crisis that is COVID-19, pop to the Nintendo Store and nab yourself a copy of Bug Fables – you won’t regret it.

Thank you for checking out our Bug Fables Switch review, thank you to DANGEN Entertainment for providing the review code and thank you to our $5 and up Patreon Backers for their ongoing support: The Monster Prom is coming up and you must find a date to avoid being the laughing stock of your fellow vampire and gorgon students. Sweet talk (or commit heinous 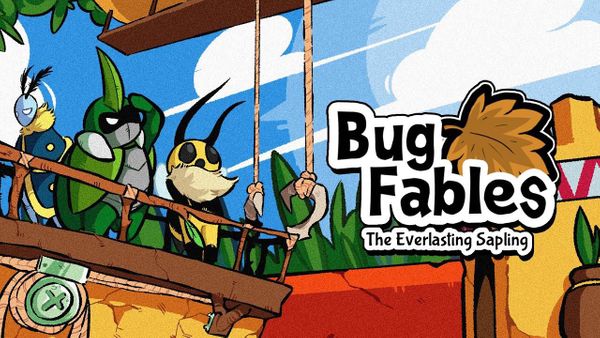 Can’t wait for the upcoming Paper Mario? Itching for a Zelda-like story and world? Haven’t had your fix of fresh Pokemon battles in some time? Then