The adorable little Bubble Bobble dragons are back in a brand new game exclusive to Nintendo Switch! Play with up to four players as a child’s bedroom comes to life and you, in traditional Bubble Bobble fashion, must save the day.

Arcade games are not known for their length and Bubble Bobble 4 Friends is no exception. Depending on your skill level and how familiar you are with Bubble Bobble’s concept, the game can easily be completed within 1-2 hours. If you’re a player who likes to go for perfect runs and high scores, you may get another hour or two out of it and there is a hard mode after completing the main campaign. Whereas for me, I quickly found myself thinking ‘is that it?’ when the game cued the closing cutscene.

If you’ve never played a Bubble Bobble game before, the concept is quite simple. Blow bubbles at enemies, causing them to be trapped inside a float upward (or whichever way the wind is facing in the case of later levels). Once they’re trapped in a bubble, you’ll need to pop said bubble with either your horn on your head, the spikes on your back ground-pound them with your behind. Chain a few enemies together and pop them all at once to gain bonuses for that sweet high score.

In terms of how well the gameplay has aged, I’d say not well. Bubble Bobble 4 Friends is not a bad game per se, but it does little to compete with many other arcade platformer games that have released due to the inspiration of its predecessors. The addition of special abilities certainly provides Bubble Bobble 4 Friends with a nice sense of series evolution as they help to add a sense of originality These special abilities start of simple with long ranged bubble blowing and eventually proceed to others, such as temporarily stopping wind flow. Before starting a world, you’re required to choose just the one special ability, making your choice that much more important. Lastly, these abilities can be levelled up, providing you with more use of them as you go. They don’t change fundamentally, but it does add some kind of variety nonetheless.

Each world in nine of its ten levels (the tenth level is always the boss fight), contains six letters scattered throughout which spell out the world EXTEND. Collect one and you get an extra life, collect all six letters and one of your skills will level up. As far as arcade colletables go, it adds a good amount of incentive without making the game too easy.

Bubble Bobble 4 Friends allows four friends to play the game co-op (I just got why this entry is called that! I’m either a genius or very slow – you decide). These types of games are always more fun when playing alongside friends and family. However despite the fact that you share the lives, you get a lot of them depending on the amount of players joining in.

Enjoying our Bubble Bobble 4 Friends Switch review so far? Don’t forget to like us on Facebook and follow us on Twitter for more Nintendo Switch content. Also, please consider supporting us on Patreon so that we can continue to do what we love doing.

The HD Rumble in Bubble Bobble 4 Friends is non-existent. It’s always a surprise when a Switch exclusive release doesn’t contain any hint of vibration at all, especially when the game features countless opportunities to do so.

If you’ve never played the original Bubble Bobble before, then fear not – it comes with the game! Right from the beginning, you have full access to the original arcade/NES title with the ability to play two-player co-op. It’s a nice piece of nostalgic history and if you are one who is looking at playing the fourth entry but haven’t played the first, there’s nothing stopping you from firing up that version first.

The first and second entries of the Bubble Bobble series in Arcades and on the NES, whilst limited with their hardware, allowed you to fall into pits and come out on the other side above. This made for some great strategy and fast-paced gameplay structure, but I was surprised to note that the fourth entry was without this feature. In this entry, you’re always contained within a rectangle and each level feels disconnected from those before and after.

Aside from that unfortunate omission, the level design certainly ramps up in creativity from world 3 (out of five). The game features ten stages in each world and the first 20 are incredibly lacklustre and dull. However starting from world 3, the developers seem to have had a lot more fun in creating challenging and inventive stages that certainly test your skills.

The story doesn’t take centre stage, rather it adds a setting to the gameplay. The entire game is set in a children’s bedroom where two of their toys are battling it out. With the game spanning across the child’s entire room (which is a pretty big room, by the way), it adds a form of context to the game’s progression.

With the game set in a child’s bedroom, you can imagine that everything is colourful and jolly. While this is the case, it all comes across as generic and uninspired. It’s nice to see the classic characters take the form of 3D models with their arms and legs actually moving instead of controlling stiff 2D character sprites, but the game’s budget certainly wasn’t put into giving the game a distinct flavour.

However upon second thought, I’m not sure what else they could have done with this series’ art direction other than making everything into 3D models. It’s a tough segment to determine an absolute opinion over but at the end of the day, I just found myself wanting just that little bit more.

One nice addition that I certainly did appreciate was that in some levels, Taito’s Space Invaders could be seen. There was even one level that took inspiration from the cult hit’s iconic gameplay – nice touch!

Bubble Bobble 4 Friend’s soundtrack is heavily inspired by its predecessors, to the point where it is almost identical aside from it no longer being done with chip-tune audio. It evokes a pleasant sense of nostalgia for those who grew up with the series or have played them before, but it gets very repetitive. I’m going to be hearing that soundtrack for weeks in my head.

Click here to read our review of Squidgies Takeover

Whilst Bubble Bobble 4 Friends may scratch those who have a Bubble Bobble shaped itch, it’s difficult to see this as a video game to recommend in an era of modern gaming. Fundamentally, the game is a sound product that runs without a technical hiccup to be seen, but the short gameplay and lack of innovation simply makes it feel generic and lacking. It is certainly a must-have for any longtime fan of the series but for those who aren’t, it will have a hard time standing out amongst the crowd.

Thank you for checking out our Bubble Bobble 4 Friends Switch review and thank you to our $5 and up Patreon Backers for their ongoing support:

Stuffy is a lonely stuffed toy who wanders a woven world alone; that is until he meets Glitch, a metallic firefly that has lost its memories. This world is now 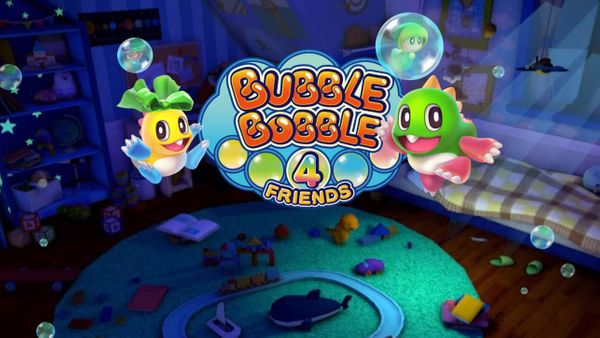 The adorable little Bubble Bobble dragons are back in a brand new game exclusive to Nintendo Switch! Play with up to four players as a child’s bedroom comes