Quaint with a childish charm and a competitive spin that makes for one of the Switch’s best party games, Boomerang Fu is an instant classic with its quirky physics, stunning visuals, upbeat music, and wealth of replay value. Sitting down on the couch to let loose with a few games is one helluva feeling that only the best can say they elicit and this is absolutely no different.

Simplicity is Boomerang Fu’s best friend as the gameplay boils down to a basic concept – take control of a charming little food item and throw a boomerang at your cohorts. Netting the most kills lets you win a round in free-for-all, holding onto the gold means you gain a point in king of the hill and team play is what it says on the tin. It’s intuitive due to its recognizable modes and slick in its execution with a brilliant concept only heightened by a wealth of diverse levels and customizability.

There are power-ups to be had with the risk of getting bamboozled, meaning that controls shift buttons and directions alter, throwing you off your game and perhaps even throwing you off a cliff to an untimely death. Otherwise, it’s all responsive controls and slick game design, but if power-ups are unfair and the Mario Kart approach to spicing things up isn’t your speed, they can always be turned off. This level of choice only makes for great replay value as you can truly go at it in a boomerang-frenzy or amp things up with plenty of nifty perks like explosives.

The only downside to Boomerang Fu is in the lack of content. There are very few game modes alongside nothing to unlock that would incentivize playing. What you get when you boot it up is what you get which is a damn shame because challenges and unlockables go a long way in experiences like this one. Nonetheless, it sports over 30 arenas and has twelve optional characters to pick from with one even being a twitchy coffee cup which is the representation that I have long needed.

Enjoying our Boomerang Fu Switch review so far? Don’t forget to like us on Facebook and follow us on Twitter for more Nintendo Switch content. Also, please consider supporting us on Patreon so that we can continue to do what we love doing.

Given the couch free-for-all that Boomerang Fu is, it has no story, but it does have a wealth of personality. The aforementioned selection of characters is simple in concept, ranging from a donut to a milk carton, but facial expressions and the color palette amp up the charm they ooze, from the watermelon’s untempered rage to the eggplant’s woe. Toppled with lively animations and a cutesy cartoony style and Boomerang Fu well and truly cements itself as wholly wholesome.

With how simple Boomerang Fu is, it didn’t get downgraded to any noticeable degree on its merry way to the Switch, retaining crisp graphics with no lag or stutter. Given that the experience is jaw-droppingly gorgeous, this is an absolute treat – vibrant, clean and stunning don’t even come close to covering how fantastic this gem looks and given its place as a local multiplayer title, the fact that it holds up on a bigger screen, especially a 4k television, is wonderful.

Boomerang Fu is a must-have, especially if you tend to play a lot of local multiplayer games on the Switch. It’s cute, slick, and incredibly unique. There’s nothing quite like it on the market right now and yet the niche it fulfills feels oddly necessary, so how did we go so long without it?

Thank you for checking out our Boomerang Fu Switch review, thank you to Stride PR for providing the review code and thank you to our $5 and up Patreon Backers for their ongoing support: 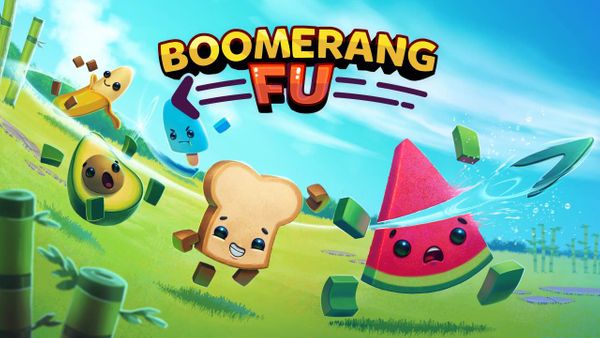 Quaint with a childish charm and a competitive spin that makes for one of the Switch’s best party games, Boomerang Fu is an instant classic with its quirky