This article is a double review of both Bleed and Bleed 2, in which we will provide each game with their own individual scores. We did this because they are very similar in terms of gameplay, and yet a lot can be said in contrary to one another.

Bleed is a run ‘n gun 2D platformer that contains nonstop action. Play as Wyrn, a girl with dreams of becoming the ultimate video game hero. To do this, she must defeat The Greatest Heroes of All Time and show everyone what she’s made of.

Bleed has a nice retro-inspired art style that is common with many indie titles. The gameplay is smooth that doesn’t try to over complicate itself. It’s just a few hours of running and gunning. It delivers on what it promises. Bleed has a unique mechanic that allows you to temporarily slow down time whilst dodging incoming projectiles and shooting your enemies. This mechanic adds an extra layer to the gameplay, and doing it in certain areas makes you feel like Neo from The Matrix.

Wyrn is able to jump up to four times in succession and can boost whilst jumping to create more maneuverability. I’ve got to say, it makes you feel like a ninja! Changing weapons on the fly is really snappy with a press of a single button that is not difficult to reach. As you play through each level, you collect points by defeating enemies, which can be used to purchase upgrades.

The game is quite difficult, so you will die a lot. However, the frequent checkpoints and lack of lives makes it a less frustrating experience. There is no filler to the game, you just jump straight into the action and is difficult from the get-go.

You are able to choose the difficulty for each level, letting you shape your own experience. When you finish each level on a certain difficulty (excluding easy), it’ll unlock more characters for you to play the game and Arcade and Challenge modes as. These unlockable characters aren’t just cosmetic as they also have their own unique abilities.

The boss battles are all unique. They require strategy, use of various abilities, pattern recognition and timing. Oh, and skill! Bleed also allows for two-player local co-op, which makes for some badass moments!

The writing and dialogue in Bleed consists of tongue-in-cheek self-referential humor. There are also short bios about each level’s boss that contain some witty video game references.

One of the first things you’ll notice is that the button configuration can feel very awkward at first. In order to shoot, you need to constantly use the right analogue stick. This is fine on a Pro Controller, but with Joy-Cons… beware of carpal-tunnel syndrome!

Bleed is a difficult game for newcomers, but feels natural once mastered. That being said, the main story only lasts for two hours, so you’ll need to master them quickly.

Bleed would have greatly benefited from alternate routes. Without them, you feel like you’re just going through the motions. The game highly encourages replayability on different difficulties, and implementing this would have greatly supported this.

Boss battles are challenging and epic in scope, however the attacks on them do not feel as satisfying as they could. Implementing HD Rumble into this would’ve gone a long way. They can also feel tediously long, creating artificial difficulty.

There appears to be no way to gain health as you make your way through a level. However, the checkpoints are quite frequent. Therefore when you defeat a boss and only have a small amount of health left, it’s best to just go in without thinking, die, and respawn at the start of the checkpoint in order to recover your health.

Lastly, for as much of an adrenaline rush this game aims to provide its players, the music is quite stale and does not get your heart pumping.

Bleed is an action packed run ‘n gunner that succeeds in what it attempts to do, but doesn’t go any further beyond that. It is a great way to kill a few hours, but its shortcomings prevent the player from wanting to 100% the game like the developers wanted them to. A little fine tuning here and there can go a long way, so let’s see if Digerati listened to feedback and improved on these aspects in the sequel…

In terms of story, Bleed 2 picks up from where the first game ended. As the context can be important in certain sections, it may bode well to play its predecessor before diving into the sequel (or Google it). Bleed 2 attempts to revamp the gameplay of the first installment by making a few tweaks, adding in some new mechanics and adding a layer of spit-shine to it. But does it redeem the series? Let’s take a look…

Some newly implemented gameplay mechanics have been implemented to add a new layer of strategy. For instance, every time you start shooting, you swing your katana. This not only acts as a melee weapon that allows you to kill monsters and objects up close, but it also takes away the mindless mechanic of just non stop shooting and forces you to think about your opponents moves. You can also deflect incoming pink projectiles coming your way, however you cannot deflect the yellow ones. Adding this melee mechanic truly adds on a new layer of depth to the game, creating new strategies for boss fights and traversing the levels. It makes you rely on quick thinking and even quicker reflexes.

You can taunt by pressing the A button. Because reasons. But in all seriousness, it does play a role in a certain boss fight, but our lips are sealed. The ability to swap out weapons mid-level in the Loadout menu creates more freedom in how you wish to approach certain levels (as well as sections of levels).

Newly added auto-scrolling levels create extra tension and are perfectly implemented at certain periods of the game. Bleed 2 runs much smoother than its predecessor, which is crucial to its frantic gameplay. It isn’t a huge difference or anything, but it does help in tight situations and just feels nice.

Graphics are more polished, with some great background detail and more personality.

There is also a better 3D effect that really adds and extra level of polish and depth to the gameplay.

You no longer have to select the next level, instead the game simply moves on to the next level (after a brief cutscene). This makes the game’s pace feel a lot more organic, proceeding the adventure as it should.

Bleed also has more frequent boss fights within each level, with less filler in between. This adds better pacing to a game that heavily relies on it. Boss fights also have more meaning to the overall narrative, rather than having them be random enemies that are there just for the sake of it. There are returning boss fights from the first installment, bringing around a sense of original nostalgia which isn’t easy to achieve in indie games.

HD Rumble has been fixed in comparison to the first installment as attacking enemies provides nice tactile feedback.

Bleed 2 added an Endless Mode in addition to the other two modes. This mode speaks for itself, allowing you to endlessly run through different levels, fighting bosses and seeing how far you can get without dying. We don’t want to say too much about the final level in case of spoilers, but Digerati implemented some pretty neat mechanics.

Lastly, the music is a massive improvement from its predecessor. The lackluster soundtrack in the first instalment was a major discredit to the game, but the changes they’ve made to it in Bleed 2 flips it on its head. The music gets your heart pumping with fast tempo and heavy instruments. A perfect soundtrack for any fast-paced shooting game, really bringing alive the intensity that Digerati were clearly going for.

Despite its vast improvements over its predecessor, Bleed 2 still has its shortcomings.

For starters, you cannot buy weapons mid-game. The only way to unlock extra weapons is by beating the main story, forcing you to play through the game multiple times. The levels are still linear, not offering any alternative paths and secret passages. As stated in the Bleed section earlier, implementing this could have greatly improved replayability. And finally, Bleed 2 still has the mechanic that when you enter a boss fight (or just finished one), your health is generally quite low with no way of healing. The better option is to just die and respawn with full health.

Bleed 2 improves on almost every aspect of its predecessor, whilst still retaining much of its original core concept. The music has been changed to better fit the themes of the game, the controls are tighter and more thought out, and the game has much more personality to it.

These games do not overstay their welcome, rather they do feel quite short for their price. However, there is a substantial amount of replayability to keep things going in the form of extra modes, local co-op multiplayer and unlockables.

If you wanted to play them both, the obvious choice would be to start with the first entry. I mean, why would you start with the sequel? However if you only wanted to buy one and weren’t concerned about the story (which can be easily Googled… or even assumed), then absolutely buy Bleed 2. The sequel just improves on its predecessor in almost every aspect and took it from being a good game to a great game.

Will you be picking up either of these games? Or have you already played them and disagree with anything we’ve said? Let us know in the Comment section below. The Mooseman is a 2D puzzle adventure game that has you solving riddles in order to pass through planes and make your way to The Upper World. Inspired by pagan 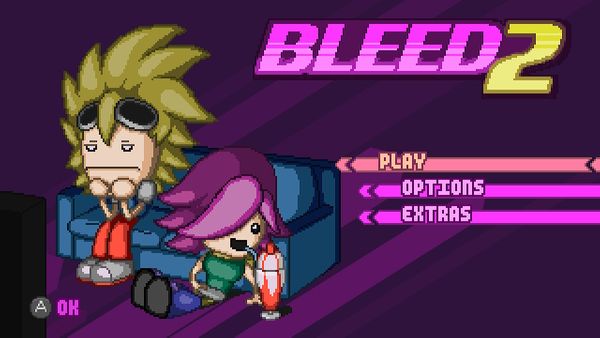 This article is a double review of both Bleed and Bleed 2, in which we will provide each game with their own individual scores. We did this because they are