Automachef is a puzzle simulator game that has you working alongside a not so subtle robot who is bent on world (fast food) domination. But running a fast food restaurant is hard work, which is why you need to automate the process by programming machines to do the job. Place these machines in the correct order whilst using as little energy and ingredients as possible.

The game mechanics may be difficult to get a grasp on at first, with a lot of specific variables and the occasional odd button layout choices, however once you get the hang of things, you’ll begin seeing that everything works seamlessly… you may even begin seeing conveyor belts in real life if you play Automachef too much.

I personally found that the tutorials tended to leave out important information. For a while there, I was unsure how to remove a piece of machinery that I had placed as the game hadn’t showed me which button to use, which is odd as it is quite an important aspect of the game. Turns out, you just need to hold the B button… that would have been nice to know!

The campaign is all mapped out to you from the very beginning, with branching paths and options to choose from. Each level contains objectives that can be ticked off, however you only need to complete the required number of recipes in order to complete the level.

Sometimes with the way that the campaign is mapped out, there will be an optional challenge mission that you can attempt to undertake. These challenges are generally a lot more difficult than the regular levels as they have specific requirements that you need to adhere to.

In addition to the campaign, there are two other modes: Contracts Mode and Test Site. Contracts Mode allows you to run your own business, requiring you to fulfil contract requests and earn profits in order to expand your empire. This part is not as robust as it sounds and I was definitely hoping for more fast food tycoon action. Test Site is simply a blank canvas for you to play around with… not much more to say there.

With the layout of the game, I was surprised to discover that the game didn’t allow for touch screen controls. I would have at least thought that the menu options would have been, considering that they are so obviously catered for them.

For newcomers and players who aren’t as adept with puzzle games, a Skip Level (even if limited) could have made the game more accessible. The crux of the game is similar to basic coding and automating software, requiring you to assign actions to objects in order to move ingredients along a specific pathway. As far as puzzle games go, its lightheartedness can be misleading.

The level design is tricky to be critical of as each one begins with a blank canvas that requires you to map out your own machinery and conveyor belts. What does come in to play, however, is that some canvases vary in size, requiring you to consider how much space you have to work with. The size of each level dictates just how you can solve the puzzle – an elegant yet effective method.

However, the order of levels to complete is strange as you sometimes need to complete optional levels to gain access to compulsory levels… kind of negates the point of something being ‘optional’. Also, the extra challenges in each level (minimising your energy and ingredients output) aren’t compulsory as it doesn’t matter how many medals you get at the end of each level, you simply move on as long as you provide the required amount of dishes.

As stated before, the difficulty of the game is not reflective of its lighthearted and funny presentation. Your robot employer/helper is witty and sarcastic, constantly trying to pass off as a human and often letting his plans of world domination slip.

Certain plot points shift the dynamic of the game’s requirements, creating context for these changes. For example, some levels require you to use less power; to provide reasoning behind this, your robot helper is making a new restaurant next to the beach which due to the area’s old electricity lines, using too much power can cause a blackout. It’s a simple touch, but it helps to create justification for the challenges and makes the game feel less… robotic.

Whilst the graphics may not be as crisp as they could be, the general presentation of Automachef is bright and colourful for a game that features a lot of grey machinery. The game saves a lot of the hardware’s processing power on the mechanics themselves with trees and tables made up of a very minimal amount of polygons.

Click here to read our review on Rise: Race the Future

The soundtrack is light-hearted and whimsical, with a jolly tone. It reminded me of something that I imagine I’d have heard in a department store during the 1950s. While it can get a little repetitive after a while, that’s what mall music can be like… so it weirdly works.

Automachef gives me PTSD flashbacks of every time I’ve started a new job; the process seems simple enough, but there are so many tiny details that just makes me want to find a storage closet to cry in. The game’s lighthearted presentation may result in some buyers being turned off by its difficulty, so if you’re reading this, you have been warned! 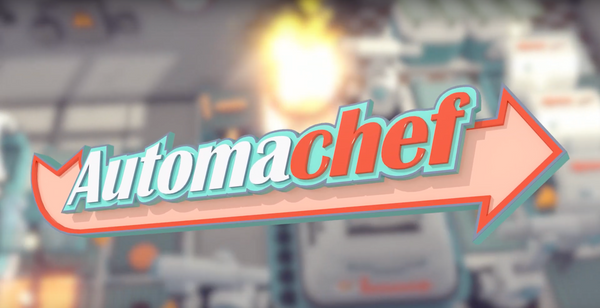 Automachef is a puzzle simulator game that has you working alongside a not so subtle robot who is bent on world (fast food) domination. But running a fast food restaurant