In a world full of neon lights and the love of video games all around you, Arcade Spirits has you starting a brand new job at Funplex, the local arcade with a colourful cast of staff. Delve on a path to better yourself and perhaps find that special someone along the way. So pick up a controller, put on your uniform and pretend the video game crash of 1983 was just a sweaty teenager’s bad dream.

Arcade Spirits adopts a very traditional visual novel approach. However in this game, all of your answers are broken down into one of five categories, varying on kindness and which characters you have connected with better. This data is easily accessible, with an R button click away from it showing you a graph of your actions; this works well to show a visual aid and see how your actions have reflected on your morality.

When you continue to interact more, you’ll gain points. I’m honestly not sure what these points are for as the game simply states that points are good. It’s fitting for a game based around an arcade but unlike arcade games, visual novels don’t particularly thrive on point systems.

Enjoying our Arcade Spirits Switch review so far? Don’t forget to like us on Facebook and follow us on Twitter for more Nintendo Switch content. Also, please consider supporting us on Patreon so that we can continue to do what we love doing.

Funnily enough, there is no touchscreen in handheld mode, nor was there any rumble. Any visual novel feels natural to control with touchscreen, and yet this feature is strangely omitted.

Your character has just been fired from their job and they’re trying to find a new direction in life. Meanwhile, your housemate recommends that you download a virtual life coach/virutal assistant named ‘Iris’ that helps you land your dream job at the Funplex.

Your role is to fulfil your dreams and find that special someone working with you at Funplex. However, it doesn’t just focus on romance, rather about your self-growth. It’s a unique perspective for a genre that tends to have the final goal to feel complete with another.

You work alongside Gavin, Ashley and Naomi. The characters are well written and they all have very distinct and memorable personalities – some more so than others. I absolutely adored the owners of The Hole Story, a coffee shop/used book store. Their dialogue was incredibly well written, often making me laugh; I never found myself without a smile on my face while they were on screen.

Set in and around a video game arcade, there a lot of gaming references around every corner. Whether it’s attending the video game expo ‘Max’ or its many references to popular franchises of the 80s and 90s, there are plenty of not-so-subtle nods to this favourite past-time of ours.

Arcade Spirit‘s layout is quite standard in terms of what you’d expect from any visual novel, being flat 2D character models in front of still-shot photo backdrops. However, there are some neat quirks that play into the game’s retro arcade theme, such as neon lights around text boxes that highlights its tech-centric near-future setting.

Your avatar customisations are basic, for lack of a better word. In its entirety, you can customise your pronoun, hair style and skin tone, hair/eye/clothing colour. That may sound like a lot but when you get down to it, these options leave your character feeling cold and generic. This directly contracts with all of the NPCs, who all come across as unique and bursting with personality.

The music goes heavy on the tech/synth approach whilst not taking too much attention away from the characters and their dialogue. It reminds me of generic tracks that you’d find while perusing through the sample music files on your brand new Windows XP computer.

The voice acting is well done, with each matching their characters well. Although, as an Aussie, I was a little put-off by the voice of Percy, a British character whose twang in their voice sounded a little too close to home.

The voice of Iris is a definite standout, replicating a much more advanced virtual assistant that one would find on modern phones. Iris had a lot of personality and was very sentient, with a lot of humour to boot. If this is the direction that our virtual assistants are going to take, then I am all for it.

Click here to read our review of Later Daters

Arcade Spirits feels like a whole new take on an established genre that can tend to get repetitive. Whilst there are still a few aspects that feel a little hit and miss, such as your avatar and the occasionally inaccurate voice acting, Arcade Spirits is an overall gem to play. If you’ve ever wanted to work in an arcade or you just want to play a game that sparks joy, then this is the game for you.

Thank you for checking out our Arcade Spirits Switch review, thank you to PQube for the review code and thank you to our $5 and up Patreon Backers for their ongoing support: Dubbed Seiken Densetsu 3 in Japan, Trials of Mana is the modern remake of a beloved 1995 Square Enix JRPG that never saw a retail release in the west. This 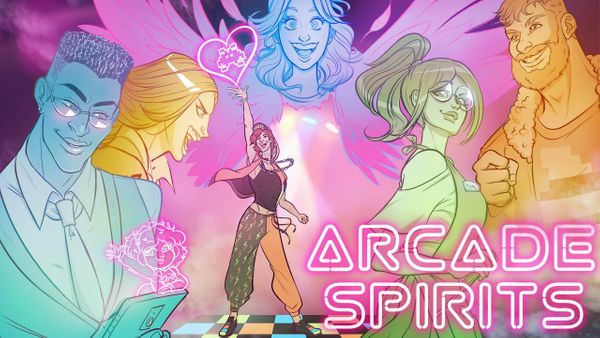