Who would’ve thought that Hell isn’t all that it’s cracked up to be? Lola and Milo are unexpectedly struck down in the prime of their lives and when they find themselves in the depths of the Netherworld, they must find their way back to the land of the living.

With Afterparty being primarily in the vein of a point and click adventure, a lot of the game is simply walking to and fro whilst choosing dialogue options when interacting with NPCs. However, the game attempts to do more with mini-games such as Beer Pong and Stack Cup. These mini-games are simple in their design, but they do well to break up the pace and they’re made extra challenging when your character grows increasingly intoxicated.

Ordering and drinking Hellcohol gives you a third option in dialogue based on the effect of the drink you order. There are various different drink options, including: Flirty Floozy, Cheeseball, Liquid Courage and Sports Fanatic; these provide various dialogue options depending on how you wish to approach a scenario. Having these approaches provides a great amount of variety and the ability to affect the seemingly linear plot progression.

I unfortunately experienced frequent frame rate dips and technical hiccups throughout my time with Afterparty. It doesn’t necessarily disturb the gameplay considering the type of game that it is but it can certainly break the immersion when line deliveries skip a beat.

Enjoying our Afterparty Switch review so far? Don’t forget to like us on Facebook and follow us on Twitter for more Nintendo Switch content. Also, please consider supporting us on Patreon so that we can continue to do what we love doing.

Whilst there is no hint of rumble, the entire game can be played in touchscreen, which is a nice change of pace if you were inclined to disconnect the Joy-Cons and sit back with just the screen. Movement can feel cumbersome this way, needing to consistently touch where you want to walk within what is showing on screen, but the option is always nice, regardless.

Afterparty‘s world is quite simplistic as you are simply walking left-to-right and pressing a single button to climb upstairs to next levels. You can speak and listen in on conversations with NPCs, but you can’t interact with the world as much as one would’ve liked to do in a wacky alternate depiction of Hell such as this. For all intents and purposes, it works and it keeps focus on the plot and the gameplay simple, but simple can get in the way of a good game becoming a great one.

The context of being in hell whilst demons and victims are unusually candid about their daily tortures is outlandish and sheer genius. You’ll want to stop for every passing conversation, despite whether it’s part of the main story or not, making its value dependent on how much you wish to explore and experience the (under)world.

The writing is absolutely incredible with fantastic characterisation and witty dry humour. It doesn’t hold back on being as crass as possible, with swearing being delivered as natural as possible and humorously detailed depictions of torture.

I often gazed upon Afterparty‘s graphics and simultaneously thought that it was both spectacular and lacking. The aesthetics are incredible, with deep colours that help to create that depiction of nightlife in eternal damnation, however the closer I looked, the more polish the models appeared to lack.

The soundtrack is a great standout, providing an overtone that will have you bopping your head back and forth.

Where the sound design really shines is in the voice acting. Night School Studio certainly found some stellar voice actors that capture each character’s personality perfectly.

Afterparty is one of those games that you’ll be looking back on with fondness for years to come. It’s unfortunate that the Switch port suffers from occasional frame rate dips and less than polished models but above all else, its unique premise and stellar characterisation consistently shines through.

Thank you for checking out our Afterparty Switch review, thank you Night School Studio for the review code and thank you to our $5 and up Patreon Backer for their ongoing support: Trials of Mana, the HD remake of Seiken Densetsu 3, is just over a month away. Today, we were treated with a brand new gameplay trailer. Check it out: Trials 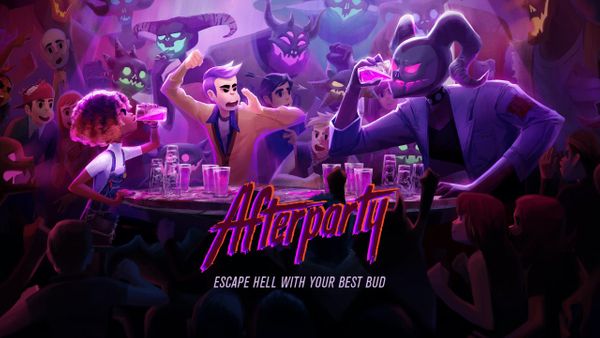