Listen to the sound of burnt rubber as your sound system emits the high pitch noise of wheels screeching across the tracks. Here, we’ve compiled a list that depicts 21 of the best Nintendo Switch racing games as of January 2020. Are you ready to dive right in? Well then:

If you’re looking for a racing game but still want a good 2D platformer, then 10 Second Run RETURNS covers all basis. As its title suggests, you each level gives you 10 seconds to get from start to finish, making for some truly intense moments. It also wouldn’t be much of a racing game without the ability to play with friends and seeing up to four sticks figures clamber for that finish line is a treat in and of itself.

Clumsy Rush has you and a friend racing hippopotamuses by controlling both their left and right legs independently, all with the intent of being the one wearing the crown at the finish line. For players of all ages, this game is one to be played with a friend, laughing at the game’s hilarity with every awkward step of the way. It’s also beautiful that much of the game’s budget and proceeds will be used to support African wildlife and adopt endangered hippopotamus – so much respect!

Twenty years ago on PlayStation 1, mascot kart racers were all the rage and to compete with Mario Kart, everyone wanted in. That is when we saw Crash Team Racing and it was amazing. Twenty years later, this cult-classic has been remade in glorious HD graphics and is a treat for all of your friends who owned an original PlayStation.

Some of you may have played Fast Racing Neo on the Wii U. If so, then this game might seem a little familiar. Fast Racing RMX combines fast action-packed racing with futuristic graphics and smooth controls. Even though fans have been screaming for a new F-Zero game for over a decade now, at least we have this indie gem to tie us over.

High quality visuals and picturesque landscapes aren’t necessarily a pre-requisite to making a good racing game. Gotcha Racing 2nd proves this by having a cute graphical presentation and a simple gatchapon concept that allows it to stand out amongst the crowd of racing games. Gotcha Racing 2nd focusses around the customisation of your little gatcha-racer and get it over the finish line before anyone else; and with the addition of time trials, a battle mode and online multiplayer, this small game packs a big punch.

The Nintendo Switch isn’t exactly known for its horsepower like the Xbox One and PS4 and with those consoles having the Forza and Gran Turismo series respectively, Mario Kart doesn’t exactly compete when it comes to more accurate Grand Prix racers. So what do you do if you are craving for this experience on the go? Well, GRID Autosport may well be the answer!

The heroes of the world have found themselves in mortal danger and it is up to you, the Hero Express, to save them! drive through various different landscapes in a 2D physics-based driving game and look cool whilst doing it. There’s not enough time to keep reading this, you have to save the heroes… now!

“Racing games were so much better back in my day,” said the elderly gamer with so much arthritis in their fingers that they can’t even use a joystick. Well with Horizon Chase Turbo, we have the best of both as the game aims to revitalise classic arcade racing built on a modern foundation. And while you’re cruising the tracks in your convertible, be sure take in the vibrant reinvigorated scenery around you.

Mantis Burn Racing is a topdown racer with a much more realistic art style. Whether you race in the desert or the snow, you can upgrade your vehicle in an RPG-style system to brave any terrain. With an expansive career mode, cross-platform multiplayer and up to 8 player wireless local multiplayer, Mantis Burn Racing provides you with the freedom to race however you want.

Everyone knows how to play Mario Kart and with the sorely missed Battle Mode making its return, this kart racer has it all! Mario Kart 8 Deluxe is the best-selling game on the Nintendo Switch, selling a whopping 19.01 million units as of October 31st 2019. It’s refined gameplay, as well as its easy to pick up yet difficult to master controls, easily cements it as one of the best Nintendo Switch racing games.

Car racing is so 90s, why not race as a ball instead? Mindball Play has you customising your ball and utilising power-ups in order to gain the advantage over your friends and family. Mindball Play is easy to pick up but difficult to master, so some practice against CPUs may just give you the upper hand. When you’re ready, you can then race your friends online to show that you are the master of Mindball Play.

Up to four squids are invited to an octopus party but there’s a problem, there is only one present to give; it’s rude to go to a party and not bring a present! Which is why you and your friends must not only race to the party, but fight over who has the present when they walk through that door.

The Next Penelope is a retro topdown racer set in a neon bright futuristic world. Explore various worlds in any order to create the feeling of a science fiction Odyssey, taking down bosses and improving Penelope’s spaceship along the way. To get ahead of your opponents, be sure to utilise your array of weapons, but make sure that you don’t use up all of your vital energy.

The anti-gravity neo-futuristic racer has become a genre in and of itself, and Redout aims to take the crown. With stunning light and shading effects, Redout’s tracks are stunning as they whiz straight past you in colourful blur. But don’t get too distracted, you’re still gunning for top spot after all.

Who remembers Wave Race 64? Those were simpler times, am I right? We may not have a modern Wave Race on our Nintendo Switch, but Riptide GP: Renegade aims to bring us back to that jet ski racing gameplay on muscle hydrojets. With a single-player career and online multiplayer, Riptide GP: Renegade packs a punch for the low price of US$10.

The world falls into chaos when the boss of the riches weapons cartel is assassinated and bike thugs everywhere learn of a large bounty on the head of the assassin. Grab your spiked bat, race through the streets and take down whoever gets in your way. That money is yours, you just have to get their first.

There’s nothing better than the feeling of pulling off the perfect drift on a dirt road, knowing that dust and gravel is all that you leave behind as you take first place. Running at a perfect 60 FPS on Nintendo Switch, Rush Rally 3 is the rally racing game fans have been craving for. The game features an extensive career mode, local and online multiplayer, as well as weekly live events that lets you compete with players around the world.

Let’s go back to a simpler time: a time when there was no other feeling quite like when an 8-bit tree flew straight past your convertible. The SEGA AGES version of Out Run features enhanced graphics for modern widescreen TVs, as well as new additional features, such as motion controls, new tracks and a brand new ranking system.

We’re not done reliving the past just yet! With more retro fun, Virtua Racing takes us back to a more polygonal time when racers were a bit more defined and you can almost count how many sides your tyres have. With intense racing action and the ability to play with up to eight players, SEGA AGES bring Virtua Racing to the 2020s in style.

Team Sonic Racing is yet another kart racer that is a great option for any fans of the genre. With the accessible nature of the game and the ability to be played by up to 12 players, you may need to buy a bigger couch.

Having listed all of the racing games above, sometimes you just want some mayhem were failing is half the fun. Get on your dirt bike and attempt ridiculous stunts that no one in their right mind would do in real life. With over 125 tracks, some of which take you to landmarks such as The Great Wall of China and the Eiffel Tower, Trials Rising is hilarity in a cartridge.

Thank you for checking out our Nintendo Switch racing games list and thank you to our $5 and up Patreon Backers for their ongoing support: Just recently, we featured Beyond Fun Studios’ Aeolis Tournament on our Kickstarter Project of the Week series. With their Kickstarter campaign still active at the time of this article, 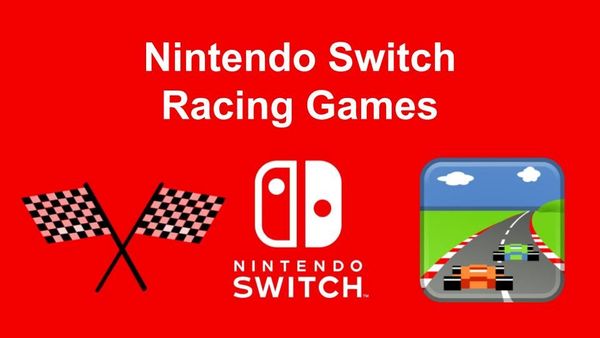