Tamashii is a 2D puzzle-platformer set in a nightmarish temple filled with a mysterious source of evil. Delve deeper into this temple, make clones of yourself and use the game’s mechanics to its fullest in order to learn more about the horrors that lie within.

Your move options are quite simplistic with A to jump (or twice to double jump), B or X or summon up to three temporary clones of yourself at a time, and Y to speed up the time for the clones to disappear. This simplistic gameplay variety therefore places more emphasis on the puzzles themselves, not overcomplicating the fundamentals.

The boss fights are fantastic and ingeniously unique. Each are focussed around the gameplay theme that their respective dungeons are based around, forcing you to take what you’ve learned in the prior levels and utilise them in frantically epic battles. Towards the final portion of the game, there are some challenging platforming sections that are more traditional than puzzle-based. They’re a great challenge, although I wish there was more to them.

For some sections that may be too challenging for beginners, there is a slow motion modifier. This allows for players of all experience levels to enjoy the game however considering its mature horror content, I would never recommend this game for children.

Tamashii is without any technical hiccups, which is essential for a puzzle platformer as one false move can leave you with frustration and when that’s the fault of the game, that makes for one unhappy player. But as stated, Tamashii is free of that burden, making it smooth sailing.

Enjoying our Tamashii Switch review so far? Don’t forget to like us on Facebook and follow us on Twitter for more Nintendo Switch content. Also, please consider supporting us on Patreon so that we can continue to do what we love doing.

Tamashii contains no HD Rumble whatsoever which for someone who has grown accustomed to playing 2D platformers with tactile feedback, your actions often feel hollow and lifeless.

Each dungeon can be surprisingly complex. The game does a great job at balancing linear levels with others that may force you to explore a little before you can see the answer. This leaves the player on their toes, making the game unpredictable and exciting.

The overworld dungeon temple makes for a serviceable maze with the occasional hidden secret. Due to the game’s short length, it certainly comes across as lacklustre, leaving me with a very unenthusiastic thumbs up.

Tamashii’s plot has a surprising amount of depth, much more than I initially expected. It is one that makes you question the morality of your quest every step of the way. The plot tackles deep themes, such as the concept of religious faith and the way that it can choose to be practised. Having such a deep and impactful presence can be off-putting to some, but it certainly gets the old noodle ticking.

Much of the game’s plot is told through dialogue between yourself and the Witch. As Tamashii is an indie puzzle platformer, the plot tends to proceed at a rapid pace and the scope of the game is minuscule in comparison to the game’s themes.

Tamashii is truly captivating in both its gameplay and aesthetic, so much so that I was disappointed after playing for 2-3 hours and I saw the credits roll. I usually don’t comment on a game’s length, but Tamashii seemed to be lacking in its overall scope. With another few months in the oven, Tamashii could have had more content which would have expanded on all that it has to offer.

The basis of the art design is simplistic, but Tamashii shows in many ways that it goes beyond a regular horror platformer. Psychedelic and strangely translucent models make you question whether your surroundings are real or not and the character designs have been well thought out.

Tamashii is said to be inspired by late 80s and early 90s platformers, and this is further accentuated by the scanelines that are present as the game’s default option. This can be turned off via the options if they become too jarring, but it’s an effective choice that solidifies that gothic horror theme.

The music can certainly get very repetitive. Each dungeon has its own theme and these themes generally consist of four bars that play on a repeating loop. In order to create dark and sombre tones, these loops are often slow-tempoed and lacking complexity which is not a bad thing, but it doesn’t help the repetitiveness, that’s for sure.

The general sound design is often an odd combination of retro bleep-bloops and distant background screams of terror. It creates a vibe that is simultaneously nostalgic and unsettling respectively and certainly leaves a lasting impression.

Tamashii is a truly challenging puzzle-platformer that will often have you stumped as the game’s mechanics stretch your mind like it may never have been stretched before. Couple that with its ominous and disconcerting themes of religious cults and the dark side of deities feeding off and manipulating faith, Tamashii is sure to leave an impression. However, that impression may be short lived as the game’s short length limits its opportunities to flesh out its world, themes and game mechanics.

Thank you for checking out our Tamashii Switch review and thank you to our $5 and up Patreon Backers for their ongoing support:

For this week’s Switch Kickstarter Project of the Week, we will be looking at Herbarium Games’ Law Law Land. The game is slated to release in November 2020 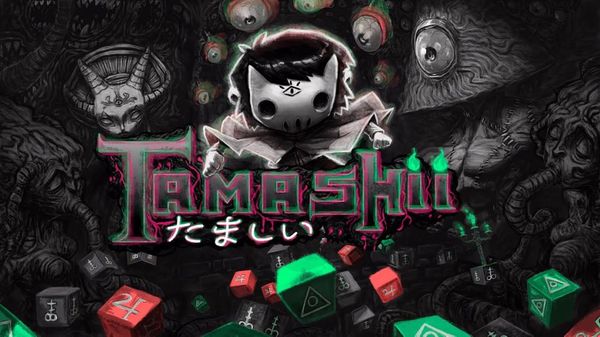 Tamashii is a 2D puzzle-platformer set in a nightmarish temple filled with a mysterious source of evil. Delve deeper into this temple, make clones of yourself and use the game&