Super Mega Space Blaster Special Turbo is a retro-inspired, 360 topdown space shooter with a very long name. Blast away asteroids, missiles, drones and bosses whilst keeping track of your ammo and completing various missions and challenges.

For an Asteroids-inspired arcade shoot ’em up, performance is crucial and to my pleasent surprise, Super Mega Space Blaster Special Turbo runs without a hitch. I also found that the difficulty was just and accurate, therefore confirming that if you take a hit, that’s on you.

Super Mega Space Blaster Special Turbo contains five modes: Project Mother, Survival, Save the Colony, One Shot and To the Death. Each mode can be played with two players, making it a perfect co-op experience to be had with a friend or family member. However, One Shot and To the Death can only be played with two players as those modes are strictly 1v1 competitive multiplayer. It’s great for quick play sessions on the go, and the controls have been well optimised for single Joy-Con play. This makes Super Mega Space Blaster Special Turbo a perfect game to set up in Tabletop Mode, pass a Joy-Con to your friend and blast some asteroids together.

Playing the game with a second player is always going to be more ideal. Not only does this make the game more achievable, but it is done so in a way that is balanced and thought through. When one player dies, the other player remains for 15 seconds until they come back. Although if they also die whilst the countdown continues, it’s game over. Another factor is that when one of the players dies a second time, the countdown is 30 seconds, and so on. The longer the round goes, the more challenging it becomes.

As you play through each mode, you’ll unlock credits by completing missions or collecting coins when blowing up asteroids. These are essential to the game’s progression as you’ll be able to use the credits to unlock weapon upgrades and new ships.

You can choose to unlock 15 different Ships however in order to give the game a sense of progression, each Ship after the first, as well as a wide array of unlockable upgrades, must be unlocked by collecting credits. Unlocking ships is a crucial part of the game as their individual stats provide a thorough level of variety. Each ship feels different from the next, with their own unique stats that cater to the player’s individual preferences; I tend to prefer ships that start off with a shield because I die a lot (don’t judge me), but others may prefer to have more bombs because boom!

Super Mega Space Blaster Special Turbo contains online leaderboard rankings, which is perfect for any modern arcade shooter. What is a great feature in this circumstance is that when playing offline, the game will still save your high score so that when you go back online, you can press ZL on the home menu screen to upload the scores… How cool is that?!

I’ve played arcade games and games that are fast-paced that have a feature where if you pause and unpause the game, there is a three second timer that allows you to regain your composure. A feature like this is perfect for Super Mega Space Blaster Special Turbo however, it sadly is nowhere to be seen. I had occasional moments where I needed to pause for a few minutes, only to die when I resumed play because I was still trying to find where I was.

Enjoying our Super Mega Space Blaster Special Turbo Switch review so far? Don’t forget to like us on Facebook and follow us on Twitter for more Nintendo Switch content. Also, please consider supporting us on Patreon so that we can continue to do what we love doing.

The HD Rumble isn’t anything special, but it’s a great inclusion nonetheless that provides effective haptic feedback, alerting the player of a hazard being destroyed.

The Level Design is very straightforward and comes down to the mission mode you select. The options alter your strategies, with Save the Colony allowing you to go through one side and come out of the other (Pacman style) whereas in Project Mother, you cannot and instead, you must defend the mothership that is to the bottom of the screen. This variety provides a surprising amount of depth and replayability, allowing you to swap between each mission type and adding to the various challenges.

The two-player only modes have their own unique maps that are welcomed and sorely needed inclusions. Each One Shot map contains obstacles scattered throughout the screen that provides these dog fights with much more depth and is even better when put on random so that you are required to quickly adapt. The To the Death mode splits the screen in two (top to bottom) with a line down the middle that kills you if you collide with it. If you both survive after the allotted time limit, this line opens up, resulting in an all out free-for-all and just lots of fun.

Whilst I can’t say that there’s much of a story to dive into here, the game does make an effort to provide context to each mode with a short letter that is entirely optional and can be accessed from the home menu screen. Each mode also contains a similar amount context that shows that at least the effort was made.

On a side note, I noticed the occasional poor grammar which became jarring throughout various moments of the game.

The game’s graphics are simplistic and nothing to write home about, but it’s clean and doesn’t appear fuzzy or difficult to look at for extended play sessions. I give it a thumbs up for its clean visual art style but a thumbs down for its lack of originality.

Super Mega Space Blaster Special Turbo’s soundtrack is another underwhelming yet serviceable feature that doesn’t do anything to stand out amongst the rest of what the game has to offer. There is also only one track, however you can unlock another track by Electric Fan Death… so that makes two, I guess. This quickly makes the music grow to be somewhat repetitive and stale.

With all that being said, the sound effects are effective and the voice acting is charming and hits the mark. I particularly enjoyed hearing the Survivors in the Save the Colony mode as they squeak for help… is that weird?

Super Mega Space Blaster Special Turbo is a simple game that provides more depth to the formula that originated from the late 70s arcade game Asteroids. While it could have benefited from in-game story content and visual and audio variety, the gameplay at its core is classic arcade fun.

Thank you for checking out our Super Mega Space Blaster Switch review and thank you to our $5 and up Patreon Backers for their ongoing support: 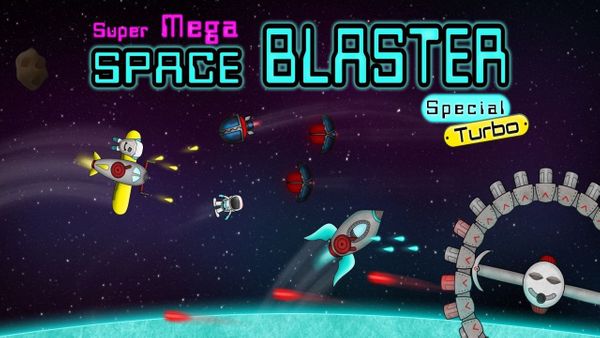 Super Mega Space Blaster Special Turbo is a retro-inspired, 360 topdown space shooter with a very long name. Blast away asteroids, missiles, drones and bosses whilst keeping track of your