Have you ever had that nightmare where you Roomba has been out to kill you? I have, and I think the developers at Samurai Punk have too. Roombo: First Blood has you playing as the robot vacuum itself, defending the home against burglars by gruesome means. Here’s the description:

Roombo: First Blood is a comedic, top-down, stealth-action game about being a robot vacuum cleaner and fending off burglars that have broken into your home.

Hack smart-home gadgets like lights, doors and various appliances to set up traps, or improvised weapons from objects around the house. Hide under furniture, set your trajectory and plow into your enemies, knocking them over with such force that they go flying, then munch them up when they’re down.

But make sure you don’t leave too much blood on the carpet, because you’ll need to make sure the house is clean before the family gets home. Only you can save Christmas and show these burglars that justice sucks.

If you’ve never heard of Samurai Punk before, they are an Australian indie studio that has brought Screencheat Unplugged and Feather to the Nintendo Switch.

Roombo: First Blood is scheduled to release on December 23rd (or as they like to put it, Christmas Eve-Eve). 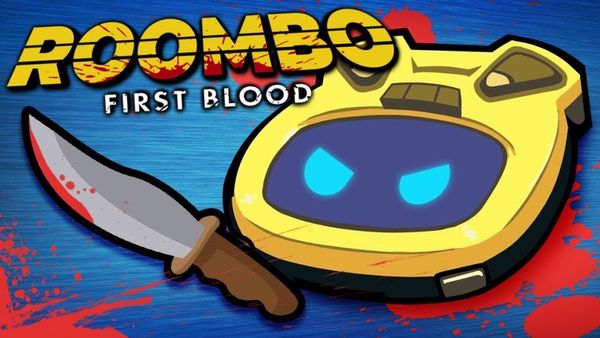 Have you ever had that nightmare where you Roomba has been out to kill you? I have, and I think the developers at Samurai Punk have too. Roombo: First Blood